The Raiders claimed quarterback DeShone Kizer off waivers from the Packers, according to Field Yates of ESPN.com (on Twitter).The move gives Oakland four quarterbacks as of this writing, though one of their signal callers will almost certainly be displaced to make room for the Notre Dame product.

A second-round selection in 2017, Kizer was pegged as a green talent that had high upside. Unfortunately for him, he was taken by the Browns, who proceeded to lose every game that season. At year’s end, he was shipped to Green Bay. Now, at the age of 23, he’s moving on to his third career NFL team.

The Raiders seemed set at quarterback with Derek Carr, Mike Glennon, and Nathan Peterman. Now, it looks like Peterman will be squeezed out to make room for Kizer. The Raiders would probably like to stash Peterman on the practice squad, but he’d have to clear waivers first.

The 53-man roster deadline is always full of surprises. Here’s the latest one – the Packers have cut quarterback DeShone Kizer, as Adam Schefter of ESPN.com tweets.

Just a couple of months ago, Kizer indicated that he did not see him “as Aaron Rodgers’ backup for the final era of his career.” Instead, he envisioned being a “future Super Bowl MVP.”

“That’s the level I want to play at. Therefore, if I’m competing and focused in on the backup competition, then once again, I’m limiting myself,” he said.

The good news for Kizer – he won’t be Rodgers’ backup for the final era of his career. The bad news – well, you know.

A second-round selection in 2017, Kizer was pegged as a green talent that had high upside. Unfortunately for the Notre Dame product, he was taken by the Browns, who proceeded to lose every game that season. At year’s end, he was shipped to Green Bay. Now, at the age of 23, he’ll look for his third NFL squad.

“I don’t see myself as Aaron Rodgers’ backup for the final era of his career. I see myself as a future Super Bowl MVP. That’s the goal that I want to head toward. That’s the level I want to play at. Therefore, if I’m competing and focused in on the backup competition, then once again, I’m limiting myself,” he said.

A second-round selection in 2017, Kizer was pegged as a high-upside but raw talent coming out of Notre Dame. Unfortunately, he was taken by the Browns, who proceeded to lose every game that season. At year’s end, he was shipped to Green Bay where he serves as a backup to Aaron Rodgers.

Though he is a long way from his goal, Kizer said he is playing the best football of his career and is learning the ropes of the NFL from Rodgers, one of the best in the business. That, along with working with quarterback instructor Adam Dedeaux, could help the Fighting Irish product salvage a career that has seemed to stall. If all goes well for Kizer, he could continue to grow under Rodgers in Green Bay before looking for a chance to compete to start in a new locale after his contract is up.

In a span of less than two hours on Friday, the Browns completely retooled their offense and added a piece to their secondary by acquiring Jarvis Landry, Tyrod Taylor and Damarious Randall from the Dolphins, Bills and Packers respectively.

The flurry of moves drastically improves the teams offense and provides a veteran stopgap quarterback — assuming no longterm deal is made — that can bridge to the signal-caller the team is presumably going to tab with one of its two first-round picks.

Leaving Cleveland was 2017 second-round pick DeShone Kizer, who was sent to Green Bay in the Randall deal. The teams also agreed to swap fourth- and fifth-round picks in the upcoming draft. For Landry, the Browns only parted with a 2018 fourth-round pick (No. 123) and 2019 seventh-round selection. In the Taylor deal, Cleveland sent one of its third-round picks (No. 65) in exchange for the turnover-averse passer.

These deals can not be officially completed until Wednesday, the first day of the 2018 season.

In the deal that sent 2015 first-round cornerback Damarious Randall to the Browns, the Packers received in return quarterback DeShone Kizer, Ian Rapoport of the NFL Network tweets. 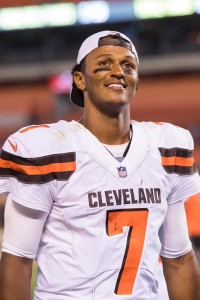 In addition to Randall and Kizer, the teams agreed to swap picks in the fourth and fifth rounds, ESPN’s Adam Schefter tweets.

A second-round selection in 2017, Kizer started 15 games with Browns as a rookie and did not win a game, posting just 11 touchdowns with a league-leading 22 interceptions. The writing appeared on the wall that the Notre Dame product was not in the Browns’ future plans after the team swung a deal for Tyrod Taylor on Friday. Just moments later, the team was able to find Kizer a new home in the Randall deal.

Boasting prototypical size and a cannon for an arm, Kizer entered the 2017 NFL Draft as a potential franchise signal-caller who could go in the first round. With the move to Green Bay, he will be able to learn the ropes from one of the best in the business in Aaron Rodgers while battling Brett Hundley, who has one year remaining on his rookie deal, for backup duties.

With the deal, the Packers cleared $1.4 MM in cap space. The Browns will have a fifth-year option on the cornerback they will have to declare by May 3, the Milwaukee Journal Sentinel’s Tom Silverstein reports (Twitter link).

A first-round selection (No. 30 overall) in 2015, Randall has appeared in 39 games with 30 starts in Green Bay and has made 10 interceptions. In 2017, the cornerback registered four interceptions and returned one for a touchdown in 12 starts.

The trade can be made official as early as Wednesday.

Hue Jackson took a step back from championing DeShone Kizer following the Browns‘ 14th loss of the season, and on Wednesday, the second-year coach backed off previous talk that the second-round rookie would be the team’s quarterback of the future.

“We did not draft a quarterback in the first round and say, ‘This is our quarterback of the future.’ We took a quarterback. We’re trying to grow him,” Jackson said Wednesday when asked of Kizer’s longer-term status, via Mary Kay Cabot of cleveland.com. ”

“… I understand when you take a guy in the second round, everybody suspects that that’s the guy. We wish it is. I mean you hope it is. But if it isn’t, that’s OK, too. And hopefully guy will continue to grow and get better, but you also have to continue to get better at the position.”

Jackson has said this season Kizer could be the Browns’ long-term quarterback solution but said Sunday he wondered if the Notre Dame product — who has 19 interceptions, five more than any other passer this season — would ever “get it.” The then-Sashi Brown-led front office may have viewed the 2018 quarterback crop as superior to this year’s, inducing the Browns to bypass a first-round quarterback in order to not block a possible 2018 Round 1 pick. The Browns are almost certainly going to hold the No. 1 overall pick, so they’ll have their chance at the best quarterback prospect come April.

Here’s the latest from the AFC, shifting to the Muhammad Wilkerson situation.

Browns rookie DeShone Kizer is out to prove that he can be the quarterback of the future in Cleveland.

“Every time I step out onto the field it’s about doing whatever I can to prove to my teammates and to this organization who I am as a quarterback and as a competitor,” said Kizer (via Mary Kay Cabot of Cleveland.com). “I look forward to being in Cleveland for a long time and I look forward to winning for a long time. Every rep that I get, it’s about making sure everyone knows exactly who I am.”

Still, Cabot argues that the Browns have no real choice but to use their top draft pick in 2018 on a quarterback. Kizer has shown promise at times, but someone from the group of Josh Rosen, Sam Darnold, and Josh Allen may provide greater upside. If the Browns finish out with the No. 1 pick – which seems very likely – and come to a consensus on someone from that trio, Kizer’s days in Cleveland could be numbered. Or, at the very least, he could find himself holding the clipboard next year.

The Dolphins dropped their fourth game in a row when the Bucs broke away in the fourth quarter of today’s contest, which has James Walker of ESPN.com saying that the team will start have to turn their attention to 2018. While Walker does note that the coaches and players will say that they’re still in the wild card hunt, the reality is that the team is showing no signs of making a run during the remaining weeks of the regular season. It’s a sobering thought for second-year head coach Adam Gase, who led Miami to a playoff birth during his first season as the Dolphins leader.

In addition to the defeat, the team also lost starting quarterback Jay Cutler to a concussion during today’s game. Cutler has already missed time earlier in the season, but the Dolphins continue to have an identity problem at the position, according to Adam Beasley of The Miami Herald. Although Matt Moore was effective in relief of Cutler in Week 11, the team did not signal what they intend to do at the quarterback position a week from now.

Gase told Beasley after the game that, “I want to get to tomorrow first, see how [Cutler is] feeling.” These situations usually get more light shed on them as the practice week goes on, however the Dolphins find themselves stuck in an unassuming gray area of the league with two veteran signal callers that can’t be relied on to deliver in the future. Miami still has Ryan Tannehill signed to a long-term deal when he fully recovers from his season-ending knee injury, but he hasn’t truly grabbed the reigns of the franchise since the team took the quarterback in the first round back in 2012.