The Jets aren’t going anywhere this year, and neither is their offensive coordinator. Despite some questionable play calling against the Patriots on Sunday, head coach Todd Bowles says he has not considered relieving OC Jeremy Bates of his duties. 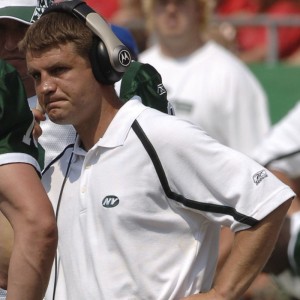 “I thought he called a good game,” Bowles said of Bates, who dialed up 50 pass plays versus just a dozen runs (Twitter link via ESPN.com’s Rich Cimini). “It’s everybody involved, it’s not just Jeremy. The other coaches and the players as well, we’re all involved in it. It’s never pointed to one person.”

The Jets are on a five-game losing streak and they’ve averaged just 11.2 points per game during that span. However, team ownership has reportedly ruled out the idea of firing Bowles before the season is through, so it only makes sense that they would ride things out with Bates. After the Jets wrap things up against the Patriots on Dec. 30, it’s likely that both men will be shown the door.

Gang Green will look to get back in the win column on Sunday afternoon when they face the Titans in Nashville.

The Jets signed Trumaine Johnson to a five-year, $72 million contract this past offseason, and they were surely hoping that the veteran cornerback would provide some stability to their secondary for the foreseeable future. Well, through his first five games with New York, it looks like the team’s assessment may have been a bit off.

Of course, this fact isn’t lost on the organization. Manish Mehta of the New York Daily News tweets that Johnson has been “profoundly disappointing to people inside the organization.” One source told the reporter that they “[t]hought he’d be better.” Michael David Smith of ProFootballTalk.com writes that “many league observers” have believed that Darryl Roberts (who’s playing on a minimum salary) has been more productive than his richer teammate.

In five games this season, Johnson has compiled 16 tackles, two passes defended, one forced fumble, and one interception, and the defense has look significantly better when the veteran was out of the lineup.

Let’s check out some more notes out of New York…

The 2018 quarterback market sent several players to new teams as likely starters. But Kirk Cousins was clearly the prize. Three teams submitted offers. Here’s the latest fallout from the Cousins deal as well as teams’ decisions to sign other quarterbacks, courtesy of TheMMQB’s Peter King.

Josh McDaniels‘ decision to break his agreement to become the Colts’ next head coach could hypothetically push the NFL to change its hiring rules, as Mike Florio of Pro Football Talk writes. Currently, teams aren’t allowed to formally hire coaches who are still employed by playoff clubs, but that hadn’t been an impediment given that no presumptive head coach had backed out of a reported deal. Had McDaniels been able to be officially offered the Indianapolis job several weeks ago, the Colts may have been aware of his wariness at the time. The NFL discussed a possible hiring rule change in 2017, but tabled the discussion, per Florio.

Bates has been the Jets’ top choice for the OC gig for a while, but he was reluctant to change jobs. Over the last week or so, the Jets managed to talk him into the promotion. Head coach Todd Bowles has emphasized the importance of keeping things steady from season to season and he has managed to do that, despite the change.

Bates is now an NFL offensive coordinator for the second time in his coaching career. His first stint came in 2010 with Pete Carroll‘s Seahawks, but lasted just one season.

Last year, the Jets offense finished 28th in total yards, 29th in first downs, 24th in passing yards, and 19th in rushing yards. If the Jets are to top their five wins from last season, they’ll have to do better across the board under Bates’ watch.

Bates got the most out of veteran Josh McCown last season and the Jets are hopeful that he can construct the right offense for their next quarterback, whoever he may be. The Jets have some holes to fill, but the good news for Bates is that they are armed with the No. 6 pick, lots of cap room, and some quality pieces, including a healthy Quincy Enunwa.

John Morton is out as offensive coordinator of the Jets, according to Manish Mehta of the Daily News (on Twitter). The Jets were hoping that Morton would be hired away by another team, but that never happened. Instead, the well-liked Morton has been pushed out.

Under Morton’s watch, the Jets finished 28th in total yards, 19th in rushing yards, and 24th in both scoring and passing yards. Overall, however, the Jets’ offense performed better than most expected.

Quarterbacks coach Jeremy Bates is a strong candidate to take over his job, but nothing has been finalized just yet. Former Steelers offensive coordinator Todd Haley could also be a candidate for the position, according to ESPN.com’s Adam Schefter (on Twitter).

It has been rumored that Bates is the Jets’ preferred choice for the OC job, but he has indicated to the team that he is not interested in the position. It’s possible that Bates could have a change of heart if the Jets are willing to pay him more than the average OC.

Another name to keep an eye on is Eagles quarterbacks coach John DeFilippo. DeFilippo was the Jets’ top choice to replace Chan Gailey last year before Philly blocked the interview request, according to an earlier report from Mehta. However, DeFilippo could be in play for a head coaching position this offseason and figures to have several other offensive coordinator opportunities.

Offensive coordinator John Morton is not a lock to return to the Jets in 2018, as Manish Mehta of the Daily News details. The Jets will not stand in the way if Morton is offered an opportunity to join up with the Raiders. Meanwhile, some within the organization would like to see quarterbacks coach Jeremy Bates elevated to OC.

Morton is well-regarded in New Jersey, but the results have been underwhelming. This past season, the Jets finished 28th in total yards, 29th in first downs, 24th in passing yards, and 19th in rushing yards. Granted, he wasn’t exactly working with the most talented personnel out there.

If the Jets do nudge Morton out the door, it’s not a given that Bates will want to ascend to OC. In fact, just a couple of weeks ago, Bates indicated that he is not interested in taking the job. Given Todd Bowles‘ desire for consistency, the team’s best bet may be to stick with Morton if Bates is unwilling to move up the ranks.

The Jets have no plans to bench Josh McCown in favor of youngster Christian Hackenberg, as NJ.com’s Connor Hughes writes. “This isn’t Triple-A,” quarterbacks coach Jeremy Bates said Tuesday. “We’re going to play the best players that give us an opportunity to win at all positions. That’s our philosophy. Josh is our starter.”

Though just 1.5 games behind Buffalo for the AFC’s last wildcard spot, New York is sitting last in the East with a 4-6 record and might be better served seeing what the team has in Hackenberg or Bryce Petty sooner rather than later with McCown, at 38 and on a one-year deal, obviously not the team’s future at the position.