SEPTEMBER 19: The Saints will be cautious with their All-Pro wide receiver. They have ruled Thomas out of their Week 2 game against the Raiders. Thomas did not practice this week, and his status for Week 3 should be considered in doubt based on the information that has surfaced.

SEPTEMBER 18: Doctors told Michael Thomas that he’d miss several weeks after suffering a high ankle sprain. However, the Saints wide receiver “felt fantastic” at Thursday’s practice and there’s a “little glimmer of hope” he can play on Monday night against the Raiders, a source tells ESPN.com’s Adam Schefter (on Twitter). 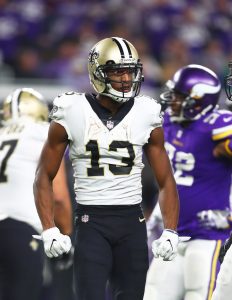 It’s still unlikely that Thomas will suit up in Las Vegas, but it’s promising news nonetheless. Saints officials, who wanted to place Thomas on IR to sideline him for a minimum of three weeks, were pleasantly surprised by his early progress.

The 27-year-old has missed only one game since entering the league in 2016. Over the last five years, he’s racked up 473 catches for 5,529 yards and 32 touchdowns, cementing himself as one of the league’s very best offensive weapons. Last year, he led the NFL with 149 catches and 1,725 yards while matching his previous career-high of nine scores.

The Saints topped the Bucs 34-23 in the season opener, despite Thomas registering just three catches for 17 yards. Of course, in the long run, Thomas would be sorely missed. If Thomas winds up on IR, he’ll miss the next three games against the Raiders, Packers, and Lions at the minimum.

The Saints will be without Michael Thomas for a while. The star wide receiver will be sidelined for several weeks with a high-ankle sprain, according to NFL.com’s Tom Pelissero (Twitter link).

The Saints want to put Thomas on injured reserve, but he’s pushing back in hopes that he can return inside of three weeks. Based on the diagnosis, Pelissero senses that an extra-speedy recovery is unlikely. The 27-year-old has missed only game as a pro and zero since 2017.

Needless to say, losing Thomas for a month or more would be devastating for the Saints. Thomas is fresh off of a record-shattering 149-catch season in which he finished with 1,725 yards and nine touchdowns. It was an unbelievable encore, even by Thomas’ standards. In the previous season, Thomas set Saints records with 125 catches and 1,405 yards while adding nine TDs. He was wildly efficient, too – Thomas’ catch rate of 84.5% was the highest of any NFL receiver since at least 2001.

But, on the flipside, the Saints did manage to down the Buccaneers on Sunday despite an uncharacteristically quiet game from Thomas. For now, Drew Brees will look to newcomer Emmanuel Sanders for increased support and likely send additional targets towards running back Alvin Kamara and tight end Jared Cook.

The Saints are clearing up some cap space. New Orleans has restructured the contracts of receiver Michael Thomas and offensive tackle Terron Armstead, a source told Nick Underhill of NewOrleans.Football (Twitter link).

Underhill adds that they haven’t restructured Janoris Jenkins‘ deal yet, but that it’s a possibility moving forward. The Saints are clearly going all in on 2020 and one or two last rides with Drew Brees, and they’re trying to maximize this window. We just heard that almost all of the money going to Brees this year is a signing bonus in order to reduce his 2020 cap hit, and now they’re getting even more flexibility.

It’s unclear exactly what financial tweaks were made to Thomas and Armstead’s deals, although it’s likely they just had 2020 salary converted to signing bonus money to spread out the cap hits over the duration of their respective contracts. Thomas signed a massive five-year, $100MM extension last July that made him the highest-paid receiver of all time.

The record-breaking wideout is under contract through the 2024 season, and will be in New Orleans long after Brees finally hangs up his cleats. Armstead signed a five-year, $65MM extension back in 2016, and is signed through the 2021 campaign. He had $10.2MM in salary converted to a signing bonus in November of 2018 to create the cap space to sign Dez Bryant.

The Saints added another veteran player earlier today in safety Malcolm Jenkins, giving them more ammo for their 2020 run. With Tom Brady now in the division, the NFC South is about to get a lot tougher.

Soon after Michael Thomas received his five-year, $100MM extension from the Saints, we heard that it wasn’t quite $100MM in reality. The base of the deal is $96.25MM, with incentives in the final couple of years that will be very hard to reach which could bump it up to $100MM. Now we have full details on the contract, courtesy of Mike Florio of ProFootballTalk.com. Florio has a year by year breakdown off all the incentives and bonuses Thomas will get. To reach the full value of $100MM, Thomas “needs to do each of the following in 2022 and 2023: Catch 100 passes, gain 1,400 yards, score 12 touchdowns, and get to the playoffs.”

Florio notes that the fully guaranteed portion of the deal is $35.64MM, “covering the first two years and a slice of 2021.” He seems to think the Saints aren’t actually tied to Thomas for too long if they don’t want to be, writing “the rolling guarantees give the Saints plenty of flexibility beyond 2020.” Thomas has put up absurd numbers in his first three years in the league, and he was the only consistent receiver New Orleans had for a lot of last season. Drew Brees was often throwing to a rotating cast of undrafted free agents and castoffs last year, so it’s safe to say they need Thomas.

On Wednesday, Michael Thomas and the Saints agreed to a deal that will keep the standout wide receiver in the fold through the 2024 season. The contract was initially reported to be worth $100MM over five years, but those numbers don’t quite tell the whole story.

It’s a done deal. And it’s one for the record books (for now, at least). 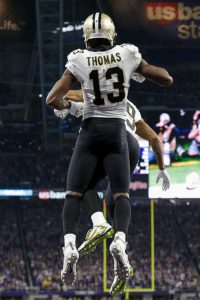 On Wednesday morning, the Saints and Michael Thomas agreed to a five-year, $100MM extension with $61MM guaranteed, Adam Schefter of ESPN.com tweets. The new deal makes him the league’s highest-paid receiver of all-time on a yearly basis.

With the new deal, Thomas is tied to New Orleans through the 2024 season. In 2019, he’ll still earn a paltry $1.148MM in the final year of his rookie contract, but he’s already locked in plenty of dough at signing.

The deal marks plenty of firsts for the Saints as well. They’ve never paid a non-QB skill-position player more than $10MM per year, but they’re now paying Thomas $20MM per annum. The previous watermark was owned by tight end Jimmy Graham, who banked $10MM/season before being traded to the Seahawks in 2015.

Last season, Thomas set Saints records with 125 catches and 1,405 yards while adding nine touchdown grabs. He was wildly efficient, too – Thomas’ catch rate of 84.5% was the highest of any NFL receiver since at least 2001.

With Thomas’ deal done, the attention will now shift to fellow standout wide receivers in search of their own monster contracts. Unlike Thomas, Falcons star Julio Jones has participated in training camp, but he is expecting a contract that will either match or exceed Thomas’ in average annual value. There’s also Bengals star A.J. Green to consider, though his recent injury may be a barrier in talks.

Down the line, Thomas’ new deal will also have ramifications for the Cowboys and Chiefs as they consider extensions for Amari Cooper and Tyreek Hill.

The Saints and wide receiver Michael Thomas are close on a new deal, Mike Florio of PFT hears. This was more or less what we heard late last week, but, at long last, the two sides sound like they’re at the goal line.

Thomas has been holding out of Saints camp as he awaits a new deal, much to the chagrin of GM Mickey Loomis. Florio senses that Thomas is gunning for $20MM/year on a five-year deal while the Saints have pitched $19MM/season. Still, there are structural and guarantee issues to be resolved. For now, the Saints have the right to fine Thomas $40K per day missed in camp.

In 2018, Thomas led the league with 125 receptions while racking up 1,405 receiving yards and nine touchdowns.

We heard earlier today that the Saints were close to getting a deal done with receiver Michael Thomas, but it apparently hasn’t been the smoothest process. Saints GM Mickey Loomis has been frustrated with the negotiations, sources told Charles Robinson of Yahoo Sports (Twitter link). “The Saints have offered to make Thomas the highest paid wideout in the NFL, with a contract that solidly exceeds Odell Beckham Jr. Loomis feels it’s a great offer w/ great structure,” Robinson writes. Loomis seems to feel like an agreement should’ve been reached by now, but Thomas’ camp is clearly still holding out for something more. Meanwhile, Thomas will continue to stay away from training camp as he awaits his new contract.

Saints coach Sean Payton addressed the media after practice today, and said he isn’t worried about the fact Thomas isn’t at camp (Twitter video link). Payton seemed confident that he’ll be back before too long, saying he’s “optimistic it’ll get done soon.” The most recent reporting suggests the Ohio State product will be getting $19-20MM annually. Thomas has established himself as one of the league’s best receivers the past couple of years, and New Orleans’ offense relies on him heavily. Thomas has the most receptions ever for a player through his first three years, and it sounds like it’s only a matter of time before the Saints break the bank for him.

The Saints and Michael Thomas are “close” to getting a deal done, Mike Florio of PFT hears. It’s still not a done deal, but Florio expects a five-year extension worth either $19MM or $20MM per season. 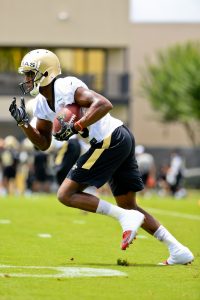 There might not be much left to debate in terms of overall value, but as with any NFL deal, the two sides are probably still haggling over guarantees, bonuses, and the all-important cash flow. In the interim, Thomas will reportedly continue to stay away from training camp.

At one point in time, Thomas was reportedly pushing for $22MM per year, which would have blown the contracts of Odell Beckham Jr. and Antonio Brown out of the water. Thomas’ reduced ask should be more palatable for the Saints, who are still in a tricky cap situation thanks in large part to Drew Brees‘ contract.

Still only 26, Thomas is one of the best young wide receivers in the NFL. Last year, he led the league with 125 catches while recording 1,405 receiving yards and nine touchdowns.

Reportedly, fellow NFC South star Julio Jones is also on the cusp of a new extension. His brand new deal with the Falcons could become official before the end of business on Friday.

Michael Thomas has not arrived at Saints training camp and won’t attend until the two sides agree on a new deal, according to Mike Garafolo and Ian Rapoport of NFL.com (Twitter link). It’s a surprising stance from the wide receiver, particularly since he is an enthusiastic player in scrimmage. 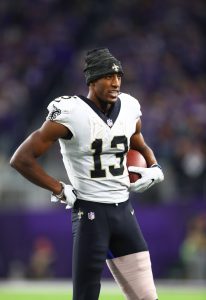 The Saints and Thomas also seem to be rather close on terms. Last month, Thomas lowered his demand to $22MM/year. Then, this week, we learned that the Saints offered him something with an average annual value of $18-$19MM. Still, he’s looking to push the pace and is willing to potentially absorb fines in order to get the deal that he wants.

The former second-round pick leads the league in receptions (321) over the past three seasons and ranks fifth in yards (3,787) since the start of the 2016 season. Thomas’ 1,405 receiving yards last season broke the Saints’ single-season record.

For now, the 26-year-old Thomas is slated for free agency after the final year of his rookie contract. Without a new deal, he’ll earn just $1.148MM in 2019.