We have a new update on the Eric Reid situation. The Panthers safety has been griping for a while now about the NFL targeting him with incessant drug tests in retaliation for his collusion suit against the league, and the league and NFLPA issued a statement a few days ago saying there was no evidence to support his claims. Reid isn’t dropping the issue however, and his lawyers are rejecting the contents of the letter released by the league, according to Jason La Canfora of CBS Sports.

“They claim that some of the dates the NFL used in its report are incorrect”, and “want access to all evidence, records, electronic messages and information sources used to determine the findings within the report”, La Canfora writes. It’s unclear what his potential next step is, but this probably isn’t the last we’ll hear of it. We also heard a few weeks ago that the Panthers were interested in bringing Reid back in 2019 and had already reached out to his agent about a new deal.

The NFL is “looking into” whether the Steelers violated its policy in not listing running back Le’Veon Bell on their injury reports in recent weeks, including before last Sunday’s AFC championship game, according to ESPN’s Adam Schefter (Twitter link). Bell departed the title game early because of a groin injury, and he then revealed after the Steelers’ 36-17 loss to New England that it had had been a problem for weeks. At no point did the Steelers disclose the ailment, though, which is why the league is investigating the matter.

Of course, the league is also scrutinizing the Seahawks for a similar issue involving cornerback Richard Sherman. That could lead to the loss of a second-round pick for Seattle, whose general manager, John Schneider, told SiriusXM on Thursday that the club “didn’t do anything malicious at all” (via Bob Condotta of the Seattle Times).

Sherman, meanwhile, believes “it would be odd, out of the norm” for the Seahawks to receive punishment, and he doesn’t expect the league to discipline the Steelers. “Le’Veon said he’s got a groin (issue) for weeks, they’re going to get a warning,” he told Conor Orr of NFL.com. “Andrew (Luck) played with cracked ribs for a whole year (back in 2015). You see what I’m saying?”

David Johnson has made a name for himself as one of the very best running backs in the NFL today. Less well known is Cardinals running backs coach Stump Mitchell, the man who is responsible for developing Johnson into an elite offensive weapon. Pro Football Rumors has learned that Mitchell is now in the final year of his contract and he is aiming to take on a larger role next season. 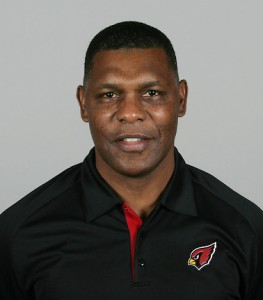 Mitchell hopes to remain with the Cardinals, agent Burton Rocks tells PFR, but Rocks also believes that he is capable of a higher title. Rocks says he could conceivably pitch Mitchell as an associate head coach, offensive coordinator, and even head coaching candidate this offseason. It’s also possible that Mitchell could entertain D-I head coaching job offers if the right one comes along.

Mitchell, of course, has deep ties to the Cardinals after spending his entire nine-year career with the organization. The 57-year-old holds the franchise record in all-purpose yards and is second all-time in rushing yards. Now, he has Johnson on track to eventually leapfrog him in the history books. There’s no sign of a staff shakeup in Arizona, but the Cardinals could theoretically promote Mitchell without displacing another coach. For example, Tom Moore holds the title of assistant head coach on offense, but the soon-to-be 78-year-old could choose to return to a less demanding consulting role.

Before joining up with the Cardinals in 2013, Mitchell was the longtime running backs coach of the Seahawks and also spent two seasons as the Redskins’ running backs coach/associate head coach. He also has college head coaching experience with Morgan State and Southern University. In addition to David Johnson, Chris Johnson, and Andre Ellington, Mitchell’s running back resume also includes the likes of Ricky Waters, Ahman Green, Shaun Alexander, Clinton Portis, and Mike Sellers.

As Johnson terrorizes opposing defenses, the timing could not be better for Mitchell to reach free agency. If the Cardinals’ ground game continues to produce, the veteran coach could have an opportunity to climb the NFL coaching ladder in the New Year.