It sounds like veteran tight end Scott Chandler may be hanging it up. The 30-year-old announced that his recent knee surgery will sideline him for at least one season, and according to ESPN’s Mike Rodak (via Twitter), the surgery will “probably” end his career. A tweet from his wife also indicated that the former Bills standout is considering retirement.

Before settling in with Buffalo, Chandler bounced around the league a bit. After being selected by San Diego in the fourth round of the 2007 draft, the Iowa product made brief practice squad cameos with the Chargers, Cowboys, and Giants.

Chandler got his first opportunity to play in 2010, when he joined the Bills. After an uninspiring first season in Buffalo, the tight end found his groove in 2011, hauling in 38 catches for 389 yards and six touchdowns. Chandler would establish himself as a reliable presence in the Bills offense, averaging 45 catches, 528 yards, and four touchdowns from 2011 through 2014.

The veteran joined the Patriots last offseason, and he finished the 2015 campaign with 23 receptions for 259 yards and four touchdowns. New England released Chandler in early March, and he reportedly visited the Colts.

Here’s a roundup of the very latest free agent rumors from around the NFL:

4:47pm: Chandler’s release comes with a failed physical designation, according to Reiss (on Twitter).

4:10pm: Two key cogs won’t be back with the Patriots in 2016. The Patriots cut Brandon LaFell and Scott Chandler, according to ESPN.com’s Adam Schefter and Mike Reiss (on Twitter). 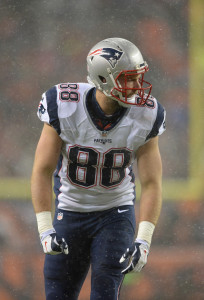 LaFell’s play last season did not match what he delivered for the Super Bowl champion Pats in 2014, with the 29-year-old receiver finishing with just 515 receiving yards and no touchdowns after beginning the season on the PUP list with a foot injury.

He was set to count for $3.675MM against New England’s cap. The Patriots will save $2.675MM of that figure with this transaction.

LaFell played a key role for the Patriots in 2014 after signing in New England on a three-year, $9MM deal. Prior to catching a touchdown pass in Super Bowl XLIX, LaFell established career highs across the board, hauling in 74 passes for 953 yards and seven touchdowns.

With Julian Edelman out last season, however, LaFell couldn’t provide the consistent option the Patriots needed as they slunk out of the No. 1 seed.

Chandler, who signed with the Patriots last year, recorded 259 yards and four TDs backing up Rob Gronkowski. Entering his age-31 season, Chandler was to count for $3.05MM against the Pats’ salary cap in 2016. The team saves $2.05MM of that total by cutting him.

These releases will increase the Patriots’ cap space to more than $10MM.

One of the more surprising offseason moves has been the LeSean McCoy trade. The running back was traded to the Bills earlier in the month, and the two sides soon came to an agreement on an extension. Meanwhile, the Eagles replaced McCoy with a pair of big names, DeMarco Murray and Ryan Mathews.

McCoy did not mince words when he was asked about the Eagles‘ offseason strategy. In fact, while appearing on the The Rich Eisen Show, the 26-year-old touched on Chip Kelly‘s willingness to pay new running backs, but not one of their stars (via Sheil Kapadia of PhillyMag.com):

“I thought about that a little bit,” he said. “I didn’t understand it. I should say that. And Chip I think is a really good coach. I think this is something different for him kind of managing both, from being a coach to now kind of managing the team as far as the players that they get and they pay.

“I saw that they originally were trying to get Frank Gore, and he backed out. So then when they got DeMarco and they got Ryan Mathews, I thought it was like a panic move. With that media in Philadelphia, they can get tough on you. So I guess that was just the way to make it right. I don’t know. I can’t really answer it. They took two backs to replace one. I think DeMarco’s a hell of a back. I think he’ll do a good job there. I’m not sure how that went.”

Here are a few notable details from some of the contracts signed by free agents within the last several days:

MONDAY, 4:06pm: The Patriots have made it official, announcing the signing of Chandler today in a press release.

FRIDAY, 12:11pm: The Patriots have reached agreement on a deal with tight end Scott Chandler, according to Adam Schefter of ESPN.com (on Twitter). The addition of Chandler gives the Patriots some depth at tight end behind star Rob Gronkowski.

Dianna Marie Russini of NBC 4 (on Twitter) reported earlier today that Chandler narrowed down his list of suitors to the Pats and Ravens. Aaron Wilson of the Baltimore Sun (on Twitter) later heard that the tight end wouldn’t be taking his talents to Baltimore and was likely to join up with New England.

Chandler, 30 in July, was released by the Bills on Wednesday. The 6’7″ athlete hauled in 47 catches for 497 yards and three touchdowns in 2014. Chandler was something of a late bloomer in the league, as he did not see any time on an NFL field between his debut in 2007 with the Chargers and his return in 2010 with the Bills. in Buffalo, he asserted himself as a real NFL talent and not just a taxi squad filler.

Veteran offensive lineman Justin Blalock is paying a visit to the Lions today, according to Josina Anderson of ESPN.com (via Twitter). Yesterday, we learned that St. Louis and Detroit both have interest in the ex-Falcon, and that he planned to visit the Rams as well.

As the Bills prepare to make a big offer to free agent tight end Charles Clay, the team has parted ways with its incumbent starter at the position. The Bills announced today in a press release that they’ve released tight end Scott Chandler.

Chandler, 30 in July, hauled in 47 catches for 497 yards and three touchdowns in 2014. Chandler was something of a late bloomer in the league, as he did not see any time on an NFL field between his debut in 2007 with the Chargers and his return in 2010 with the Bills. in Buffalo, he asserted himself as a real NFL talent and not just a taxi squad filler.

Mike Rodak of ESPN.com (on Twitter) wouldn’t be surprised to see the Patriots get in on Chandler. Chandler has a history of doing well against New England and the Pats could use a tight end.

Patriots running back Stevan Ridley should have plenty of motivation heading into the season. After struggling with fumble issues for much of last year, the former third-rounder was replaced by veteran LeGarrette Blount towards the end of the regular season and playoffs. With Blount gone, Ridley has a great opportunity to reestablish himself as a premier back. The opportunity to regain his starting gig isn’t the 25-year-old’s only motivation, however – Ridley is also entering the final year of his contract.

The fourth-year player addressed the situation and acknowledged that a future contract is certainly on his mind (via Phil Perry of CSNNE.com)…

“I have to be honest about it, it’s there,” Ridley said. “But it’s not my first concern. My first concern is going out there and being the best player for this team. If I go out there and have a productive year and do what I need to do, the contract will take care of itself.

“I’m not really gonna put too much thought into it. As you guys know, if I start thinking about that, it can easily be a distraction. I can’t worry about that. I’m gonna have some good days, have some bad days, I’m just gonna keep working, keep grinding, keep my head in the dirt and keep grinding it out.”

As the Boston Herald’s Jeff Howe tweets, the Patriots haven’t had any discussion with Ridley’s camp regarding a new contract. Howe doesn’t expect any type of action until after the season, “if at all.”