The Packers are making a change on special teams. They are firing ST coordinator Shawn Mennenga, according to Tom Pelissero of NFL.com (on Twitter). A longtime college coach, Mennenga had previously served as Browns assistant ST coach before joining Matt LaFleur‘s staff in 2019. The Packers are expected to promote assistant ST coach Maurice Drayton to replace Mennenga, Pelissero tweets. At least one other team was interested in Drayton for such a role, according to Tom Silverstein of the Milwaukee Journal Sentinel. Drayton was in contention for this job two years ago.

Here is the latest out of Green Bay and from around the league:

Let’s take a quick spin around the AFC South:

“I’m not going to be back,” Rathman said, via Matt Maiocco of CSNBayArea.com. “I feel like it’s the best for everybody if I just parted and let those guys do their thing and take me out of the equation so that nobody’s uncomfortable. I’m looking to coach running backs and that’s what I want to do. I’m just going to wait for the next opportunity and go for it when it happens.”

Shanahan and new GM John Lynch met with Rathman on Thursday in an attempt to find another position for him, but the 54-year-old coach didn’t think such a role existed that made sense. Rathman coached the 49ers’ backs since 2009 and previously served on Steve Mariucci’s staff from 1997-2002, doing so after a playing career highlighted by starting roles on two 49ers Super Bowl champions. Rathman told Maiocco he would take a year off if necessary but wants to stay in the NFL coaching ranks.

Here’s more out of San Francisco and other NFC cities. 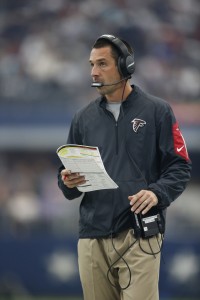 After promoting one coach earlier today, it sounds like the 49ers will be parting ways with the rest of their coaching staff. Fox Sports’ Alex Marvez reports (via Twitter) that the organization plans on dismissing all assistants except running backs coach Tom Rathman. A member of that coaching staff told CSN Bay Area’s Matt Maiocco that they are “in the dark” regarding the team’s plans (Twitter link). Its unclear if any of the remaining coordinators, including defensive coordinator Vic Fangio, are safe.

Meanwhile, Matt Barrows of the Sacramento Bee tweets that “several” 49ers assistants will likely join former offensive coordinator Greg Roman with the Bills, while others will likely follow Fangio.