After playing 12 seasons with the Saints, Zach Strief will return to the organization as a coach. The Saints are hiring Strief as their assistant offensive line coach, according to WWL Radio.

Strief has worked with WWL as a play-by-play announcer in New Orleans since retiring in 2018, but he will join Sean Payton‘s staff. Previous Saints assistant O-line coach Brendan Nugent is expected to take another position on staff, Mike Triplett of ESPN.com tweets.

Part of Payton’s first Saints draft class, as a seventh-round pick in 2006, Strief only played in New Orleans during his NFL career. After serving as a fill-in starter early in his career, Strief became a full-timer at right tackle in the 2010s. He spent six-plus seasons as the Saints’ regular right tackle, with knee injuries in 2017 ending that run. 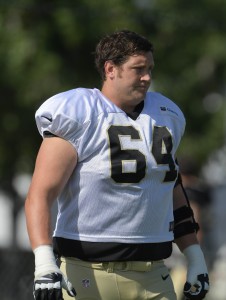 Strief, a seventh round pick in 2006, spent all 12 seasons of his NFL career with the Saints. The longtime team captain leaves the game after earning millions of dollars and a Super Bowl ring. The lineman was set to earn $4MM in salary and bonuses this season, according to ESPN’s Mike Triplett (via Twitter).

Strief turned in a strong campaign in 2016, but he was limited in 2017 after suffering serious knee injuries. In light of his medical issues, Strief is opting to transition to a new phase of his life with his 35th birthday on the horizon.

The Saints will miss Strief, but they have two quality starting tackles in Terron Armstead and 2017 first-round pick Ryan Ramczyk.

Saints offensive tackle Zach Strief is expected to retire this offseason, according to Ian Rapoport of NFL.com (on Twitter). Strief has yet to announce his decision, but that should take place soon.

“The reality is that we all love some part of this game and there’s a part of that that’s just in us,” Strief said in January as he hinted at retirement. “So it makes it very difficult always when that happens, when that time comes. And like I said, I think take some time, really make that decision away from football and make it with your family. When it is time, I will have no regrets. I know that when I decide that this has gone on so much longer and so much better than I ever could have imagined.”

Strief turned in one of his best seasons to date in 2016, but he was limited in 2017 after suffering serious knee injuries. Fortunately for the Saints, they already have two quality tackles in-house at a time when teams are scrambling for quality linemen. Terron Armstead will continue as the team’s starting left tackle with 2017 first-round pick Ryan Ramczyk on the right side. Last year, Ramczyk graded out as the No. 8 tackle in the NFL, according to Pro Football Focus. Armstead wasn’t too far behind at No. 25.

Strief leaves the NFL after 12 seasons, all of which were spent in New Orleans. Going back to 2006, he appeared in 158 games with 94 starts.

“The reality is that we all love some part of this game and there’s a part of that that’s just in us,” Strief said. “So it makes it very difficult always when that happens, when that time comes. And like I said, I think take some time, really make that decision away from football and make it with your family. When it is time, I will have no regrets. I know that when I decide that this has gone on so much longer and so much better than I ever could have imagined.”

Strief still feels like he can play at a high level and believes that his 2016 campaign was among his best. However, 2017 was a trying year for him after he suffered major knee injuries in the fall. If Strief walks away this offseason, the Saints will have to prioritize the RT position in the spring.

A trouble spot at the beginning of the season, the Saints’ tackle situation has stabilized as they made their way into the NFC playoff race. But they won’t have an insurance policy that was once possible.

Zach Strief will not come off IR this season, Mike Triplett of ESPN.com reports. The veteran right tackle has been out since early October due to ACL and MCL injuries, and Triplett reports those maladies required surgery earlier this month.

Upon placing Strief on IR with what was then called an MCL sprain, the Saints hoped he would be able to return this season. But the 34-year-old blocker now has an uncertain future after a 12-year run in New Orleans.

While Strief and Drew Brees are the longest-tenured players on the roster, Strief has another year on his contract — unlike Brees. But the veteran tackle has taken a year-to-year approach with his career.

Coming off a serious injury and having seen first-rounder Ryan Ramczyk commandeer his position, Strief could see his tenure with the team conclude. However, the former seventh-round pick does have a team-friendly deal ($1.1MM base, $5.1MM cap figure).

Ramczyk and Terron Armstead are now entrenched as New Orleans’ tackles, although Armstead — who missed time with a labrum injury this season — is now dealing with thigh and shoulder ailments. Strief took over the Saints’ right tackle job in 2011 and has 98 career starts, including playoffs, during his 12-year run.

The Saints have placed offensive tackle Zach Strief on injured reserve, a source tells ESPN.com’s Field Yates (on Twitter). Strief suffered an MCL sprain earlier this year but the team was hoping to avoid IR.

By placing Strief on IR, the Saints will have to keep him out of action for a minimum of eight weeks. The good news is that offensive line coach Dan Roushar says Strief may be a candidate to return later in the season (Twitter link via Joel A. Erickson of The Advocate).

Strief suffered his injury during the team’s season opener and that was a bad blow considering that fellow starting tackle Terron Armstead was also injured to start the year. The Saints have managed to go 2-2 even with their banged up offensive line, but it remains to be seen if they can keep things afloat going forward.

In 2016, the 34-year-old played more than 97% of the Saints’ offensive snaps and posted perhaps the best campaign of his career. He graded as the No. 12 overall tackle in the NFL, per Pro Football Focus, which gave him excellent marks in the run and pass game.

The Saints are on bye in Week 5 before facing the Lions in Week 6.

Saints tackle Zach Strief suffered an MCL sprain during Monday night’s game against the Vikings and is expected to miss a few weeks, Ian Rapoport of NFL.com tweets. It’s a bad break for the 0-1 Saints who are already without left tackle Terron Armstead.

When Strief exited the game, he was replaced by reserve Senio Kelemete. Unless the Saints add a tackle in the coming days, they’ll probably head into their Week 2 contest with Kelemete and rookie Ryan Ramczyk starting at left tackle. That’s not the O-Line you want against the Patriots, even though their pass rush is shaky.

Last year, the 33-year-old Strief played more than 97% of the Saints’ offensive snaps and posted perhaps the best campaign of his career. He graded as the No. 12 overall tackle in the NFL, per Pro Football Focus, which gave him excellent marks in the run and pass game.

Strief, a 12-year veteran, has not missed significant time since the 2012 season.

The Saints have restructured the contract of offensive tackle Zach Strief, according to Nick Underhill of the Advocate (all Twitter links).

Originally scheduled to earn a base salary of $1MM in 2017, Strief will now bring in a $1.7MM base salary next season, per Underhill. Meanwhile, Strief’s per-game active roster bonuses will increase from $1.4 to $1.7MM. While none of those figures are guaranteed, the moves do lift Strief’s cap charge by $1MM to $6.1MM.

The Saints appear to be simply rewarding Strief for a solid 2016 season, as the reworking of his contract doesn’t contain any financial incentives for the club. Last year, the 33-year-old Strief played more than 97% of the Saints’ offensive snaps and posted perhaps the best campaign of his career. Strief graded as the No. 12 overall tackle in the NFL, per Pro Football Focus, which gave him excellent marks in the run and pass game.

Currently, Strief is signed through the 2018 season. The Saints, for their part, seem to have found a ready-made long-term replacement for Strief by selecting Wisconsin tackle Ryan Ramczyk with the final pick of the first round in last month’s draft.