Ted Ginn Jr. will enter the 2020 season as the league’s second-oldest wide receiver, behind Larry Fitzgerald, and the 35-year-old veteran did not find a new team until after the draft. But the Bears may have big plans for the veteran speed merchant. Ginn will likely be the outside starter opposite Allen Robinson, Adam Caplan of InsidetheBirds.com notes. The Bears entered the offseason concerned about their speed on offense, wanting more help beyond Tarik Cohen in that department. Ginn remains one of the NFL’s fastest receivers and may well be on the verge of starting for a fifth NFL team. After missing most of the Saints’ 2018 season, Ginn caught 30 passes for 421 yards in 2019.

The Bears also have 2019 draftee Riley Ridley, he of a 4.61-second 40-yard dash clocking at the Combine, and 2020 pick Darnell Mooney. The latter profiles as more intriguing through a speed lens, having blazed to a 4.38-second time this year. But thanks to the virtual offseason, Day 3 picks might have a tougher time acclimating than the already-difficult college-to-NFL jump brings.

Corey Clement will head to IR for a second straight season. The Eagles will place the third-year running back on their IR list because of a shoulder injury, Mike Garafolo of NFL.com tweets.

They will promote running back Boston Scott from the practice squad to take Clement’s roster spot. Scott, Jordan Howard, Miles Sanders and Darren Sproles represent Philadelphia’s healthy running backs. Clement will be out for at least eight weeks and runs the risk of missing the rest of the season, depending on the injury’s severity and the Eagles’ IR situation.

Clement has not factored into Philadelphia’s backfield much this season, with the Eagles using him on just three offensive snaps. New additions Jordan Howard and Miles Sanders have shouldered the ball-carrying responsibilities and will continue to do so in Week 6.

Best known for his Super Bowl LI contributions — the Philly Special pitch and a nifty touchdown reception — Clement has logged 84 and 90 regular-season touches in his first two years, respectively. He has served as an Eagles auxiliary back, doing so last season for a team that struggled to keep backs healthy. A knee injury sent Clement to IR in December of last season. Sanders and Howard have given Philly more stability this season. 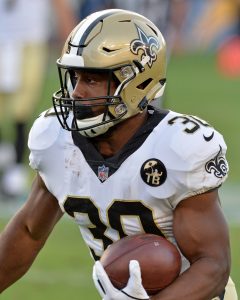