While Josh McDaniels‘ stint in Denver is not remembered fondly, one of the fliers the coach/de facto GM took during his tumultuous tenure turned out to pay big dividends. Ten years ago today, the Broncos signed wide receiver Brandon Lloyd. This led to one of the more randomly great receiving seasons in modern NFL history. 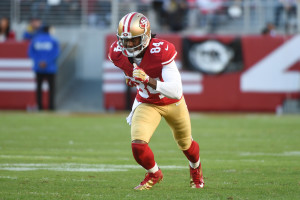 After stays as a starter with the 49ers, Redskins and Bears between 2003-08, Lloyd signed a one-year pact with the Broncos on June 15, 2009. The deal paid him less than $700K. However, the Broncos used the ’09 season as an evaluation period for the former fourth-rounder. Brandon Marshall, Eddie Royal, Jabar Gaffney and Brandon Stokley resided on the ’09 Broncos, who deactivated Lloyd for 14 games. But their 2010 team relied on him heavily.

McDaniels kept Lloyd in Denver via multiyear deal worth more than $2MM in 2010. Although the Broncos stumbled to one of the worst seasons in franchise history, a 4-12 campaign that included McDaniels’ midseason firing, Lloyd blew up for one of the organization’s greatest receiving showings. After an eight-catch 2009, Lloyd produced 77 receptions, 1,448 yards and 11 touchdowns. That yardage total not only led the NFL by a fairly healthy margin, it remains the third-highest single-season figure in Broncos history — trailing only Demaryius Thomas (2014) and Rod Smith (2001). Thomas and Eric Decker took a backseat to Lloyd as rookies.

The then-29-year-old wideout’s showing with Kyle Orton and Tim Tebow at that offense’s controls — after the Broncos had parted ways with Marshall and Stokley — earned Pro Bowl acclaim. But less than a year later, the Broncos traded Lloyd to the Rams. A contract dispute, and the team’s Tebow-based shift to one of the more run-centric offenses in recent NFL annals a year later, led to Lloyd’s midseason departure.

Both sides benefited from the exit. Thomas and Decker helped attract Peyton Manning to Denver in 2012, and Lloyd signed a three-year, $12MM deal with the Patriots (who had recently rehired McDaniels) that year. Lloyd, who recorded one 1,000-yard receiving season in 11 NFL campaigns, was the Patriots’ second-leading receiver in 2012 but was released the following offseason.

The conditional pick the Broncos received from the Rams turned into a 2012 fifth-rounder, which became Malik Jackson. The defensive lineman started in both Super Bowl XLVIII and Super Bowl 50 and remains a well-regarded interior presence eight years into his career.

Veteran wide receiver Brandon Lloyd has announced his retirement from the NFL, tweets Nick Wagoner of ESPN.com. According to Wagoner, Lloyd’s announcement, which was made via press release, thanked several coaches and players by name.

Lloyd, who was known for his ability to make acrobatic catches, broke into the NFL as a fourth-round pick in 2003, and spent his first three season with the 49ers. The Illinois product bounced around from San Francisco to Washington to Chicago, and then to Denver, where he had his breakout season in 2010. Having never totaled more than 48 receptions or 733 yards in a season prior to ’10, Lloyd smashed those career highs, racking up a league-leading 1,448 receiving yards along with 11 touchdowns on 77 catches.

A few weeks into the 2011 season, Lloyd was traded by the Broncos to the Rams. At season’s end, he signed a contract with the Patriots, and enjoyed one last productive season in New England in 2012, picking up 911 yards and four touchdowns on 74 receptions.

Most recently, Lloyd played for the 2014 Niners, making him the latest member of that team to announce his retirement, following in the footsteps of Patrick Willis, Justin Smith, and Chris Borland. Lloyd, who turned 34 over the summer, had just 14 catches last season in San Francisco, and had been a free agent since his one-year pact expired.

With Reggie Wayne‘s NFL future still up in the air, the Colts have explored the possibility of bringing in a veteran wide receiver to start opposite T.Y. Hilton, says Jason Cole of Bleacher Report (video link). According to Cole, the team has internally discussed players like Brandon Marshall, Andre Johnson, Mike Wallace, and Vincent Jackson as potential targets. Not all of those players will become available in the next few weeks, but one or more could be traded or released, and if the Colts had their pick, Marshall may be their top choice, per Cole.

While we wait to see if any opportunities open up for the Colts, Jason La Canfora of CBSSports.com has a few more tidbits for us on the wide receiver market. Let’s dive in….

As their new agreement with defensive tackle Glenn Dorsey exhibits, the 49ers are continuing their pattern of extending players whose leverage may be lacking due to injuries, their spot on the depth chart, or various other factors. Eric Branch of the San Francisco Chronicle points out (via Twitter) that the Niners locked up Alex Boone, Daniel Kilgore, and Ian Williams before those players became starters, and Jason Fitzgerald of Over the Cap notes (via Twitter) that strategy has allowed the club to create several team-friendly contracts and compile plenty of depth.

Of course, as Fitzgerald adds (via Twitter), the downside of signing players early to club-friendly deals is that when someone like Boone significantly outplays that contract, it can result in a stand-off like the one taking place between the team and the veteran guard right now. As we wait to see how the Boone situation is resolved, let’s check in on a few other Niners-related items….

Even with news (via a tweet from The Seattle Times’ Bob Condotta) that they’d be receiving their Super Bowl rings following Thursday’s practice, things got a bit heated at Seahawks minicamp this afternoon.

As Condotta writes in his Seahawks blog, the fracas began when wideout Bryan Walters hurt his shoulder after attempting a diving catch. Safety Earl Thomas was covering the play, and while Condotta didn’t have a clear view on the amount of contact, Seattle’s offensive players seemed to think it was a dirty hit.

The two teams jawed at each other before lining up for another play. While running down field, wide receiver Phil Bates and cornerback Richard Sherman got locked up and the fists came out. Bates appeared to have thrown a punch before the players were broken up. Thomas and receiver Doug Baldwin continued to jaw at each other while Percy Harvin had to be held back by Marshawn Lynch.

“They are such a tight group of guys that they don’t want to give an inch sometimes, both offensively and defensively. Most good teams are close and tight like that where they can practice like that. They were just having fun.”

Fun…that sounds about right. Let’s check out other news from the NFC West:

It’s Saturday and that means a fresh batch of mailbags from ESPN’s NFL writers. Let’s take a look at some notes from the NFC…

WEDNESDAY, 1:22pm: Lloyd’s deal includes no guaranteed money, a source tells Matt Maiocco of CSNBayArea.com. However, the wide receiver can earn $1.005MM on the deal. He’ll get a $955K base with $50K available through a workout bonus. The deal doesn’t have a signing bonus or incentives.

TUESDAY, 12:17pm: The 49ers have signed free agent wide receiver Brandon Lloyd to a one-year contract, the team announced today in a press release. Terms of the agreement weren’t disclosed.

Lloyd, who is just two years removed from a 74-catch season, reportedly received inquiries from at least six teams last fall, including the 49ers, but rejected all overtures. A Pro Football Talk report at the time suggested Lloyd was “neither physically nor mentally ready” to continue his playing career at that point, but it seems the 32-year-old has changed his stance since then.

The 49ers pursued receivers like Julian Edelman and Emmanuel Sanders earlier in the offseason, but were only able to lock up their own free agent wideout, Anquan Boldin. That left San Francisco with a solid 1-2 punch of Boldin and Michael Crabtree, but the club was clearly looking for alternatives at the No. 3 spot. Lloyd, who was originally drafted by San Francisco in 2003, will presumably have the upper hand for that third receiver role over players like Quinton Patton and Jonathan Baldwin.

Matt Maiocco of CSNBayArea.com first reported last week that the Niners were in talks with Lloyd about a possible comeback.

49ers In Talks With Brandon Lloyd

After voluntarily sitting out the 2013 season, veteran wideout Brandon Lloyd may be mulling the possibility of returning for 2014. According to Matt Maiocco of CSNBayArea.com, the 49ers have engaged in talks with Lloyd about a potential comeback.

Lloyd, who is just two years removed from a 74-catch season, reportedly received inquiries from at least six teams last fall, including the 49ers, but rejected all overtures. A Pro Football Talk report at the time suggested Lloyd was “neither physically nor mentally ready” to continue his playing career at that point, so we’ll have to see if the 32-year-old has changed that stance.

As for the 49ers, they pursued receivers like Julian Edelman and Emmanuel Sanders earlier in the offseason, but were only able to lock up their own free agent wideout, Anquan Boldin. That leaves San Francisco with a solid 1-2 punch of Boldin and Michael Crabtree, but the club is clearly looking for alternatives at the No. 3 spot. If Lloyd were to sign with the Niners, he would presumably have the upper hand for that third receiver role over players like Quinton Patton and Jonathan Baldwin.