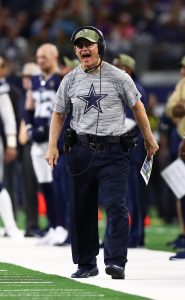 Marinelli will replace Brentson Buckner, who joined Jon Gruden‘s staff last year. While Buckner helped the Raiders improve on their anemic 2018 sack total (13) and assisted in Oakland’s run defense climbing from 30th in 2018 to eighth this season, he will be in search of a new gig.

Gruden worked with Marinelli in Tampa, keeping Tony Dungy‘s former D-line coach on as Buccaneers assistant head coach from 2002-05. While Marinelli is best known for his three-year Lions tenure ending in the NFL’s first 0-16 season, the now-70-year-old coach oversaw top-16 scoring defenses in each of his six years as Cowboys defensive coordinator. Marinelli will now work with Gruden and returning defensive coordinator Paul Guenther in Las Vegas.

Marinelli did well to help DeMarcus Lawrence become a high-end pass rusher and will be tasked with elevating No. 4 overall pick Clelin Ferrell. Buckner did well to coax fourth-round rookie Maxx Crosby into a key pressure artist, with the Eastern Michigan product leading the Raiders with 10 sacks. Ferrell finished with 4.5.

Cardinals WR Larry Fitzgerald did not announce that he would return for the 2018 season until mid-February of 2018, and it appears that we could have a similar wait in 2019. Fitz told ESPN’s Adam Schefter earlier this week that he would take some time to collect his thoughts after a difficult 3-13 season, but that the team’s recent hiring of new head coach Kliff Kingsbury would not sway him one way or another. If Fitz does decide to play, he would technically be eligible for free agency, but it is impossible to imagine him playing for a team other than Arizona.

The Buccaneers made a major change this week, firing much-maligned defensive coordinator Mike Smith and replacing him with Mark Duffner. The Bucs’ defense had picked up right where they left off in 2017, and had been an absolute sieve, leading for calls to fire Smith for weeks now. While Bucs fans will be happy that anyone other than Smith is calling the defense, some in Tampa Bay’s locker room apparently were hoping the team would go in a different direction for their interim coordinator.

There “was strong support by the players for Bucs DL Coach Brentson Buckner to take over the defense”, according to Jason La Canfora of CBS Sports (Twitter link). It’s notable that the team apparently didn’t go with the players’ first choice, and it will be interesting to watch how things play out with Duffner. His first test will be stopping Baker Mayfield and the Browns this Sunday.

With teams officially able to place the franchise tag on players beginning tomorrow, there is growing speculation that the Seahawks will use the option on defensive tackle Sheldon Richardson, writes Bob Condotta of the Seattle Times.

Condotta cited a number of league insiders who believe the team is likely to use the tag due to the Seahawks paying a steep price to acquire him leading up to the 2017 season. Shortly before the 2017 campaign kicked off, Seattle sent wide receiver Jermaine Kearse and a second-round pick to the Jets in exchange for the fifth-year lineman.

With the Seahawks likely to have about $14 MM in cap space this offseason, they would likely need to rework some deals or extensions in order to afford the $14.5 MM tag the defensive tackle would command. In the piece, Eric Edholm of Pro Football Weekly said Richardson could be a transition-tag candidate, which would cost the Seahawks roughly $11.7 MM.

If the team doesn’t use the tag, it is likely to lose out on the impact defensive tackle. In January, it was reported the Richardson has a soft spot for the Jets and could land back with his former team.

In an excellent piece for CBS Sports, former NFL agent Joel Corry sets forth how the Eagles might approach this offseason, and he offers his take on the team’s prospects in the short- and long-term. The roster, of course, is loaded, thanks to quality drafting, savvy trades, and an MVP-caliber QB playing on a rookie contract. But cap space is at a premium and will continue to be in the near future.

Luckily for Philadelphia, 19 of its 22 starters are under contract for the 2018 season, but the team will still need to create cap space. The Eagles could ask LT Jason Peters, who is expected to return next year, to take a pay cut, and they could create $5MM of space by declining Torrey Smith‘s 2018 option and another $5MM by releasing or trading Vinny Curry, all of which look like real possibilities. The expected extension of Brandon Graham would also free up some room.

Corry also believes that the team should not trade Nick Foles unless someone makes an offer that Philadelphia cannot refuse, which sounds like at least a second-round pick.