Al Golden is leaving Cincinnati after all. The Bengals coach is joining Notre Dame as their new defensive coordinator, reports ESPN’s Pete Thamel (on Twitter). Golden is inking a three-year deal with the school.

The 52-year-old had spent the past two seasons with the Bengals as the team’s linebackers coach. Following a successful 2021 season, Golden was expected to ink a new deal with Cincy. Instead, he’ll be heading back to the college ranks.

Golden spent almost two decades in the NCAA, including stints as head coach at Temple and Miami. He joined the NFL in 2016 when he was hired as the Lions tight ends coach, and he eventually switched over to the defensive side of the ball in 2018.

“At the end of every season, every person goes through somewhat of a process at the end of the season and then the following season,” Belichick said (via Ryan Hannable of WEEI.com). “I think everyone that is involved in a NFL season, you get pretty drained especially after a season like this. [You] go through the end of the year process. The following year is the following year. It’s the same for everybody. I certainly can’t speak for anybody else.

You’d have to ask any individual for every situation, but I would say five minutes after the game, or the day after the game is not really the time to make those decisions.”

Gronkowski maxed out his incentive-laden 2017 contract by returning to first-team All-Pro status, the fourth time he’s done so in his eight-year career. Only Tony Gonzalez (six) earned more first-team All-Pro distinctions. Gronk will turn 29 in May and still has two seasons remaining on his extension signed back in 2012. He’s set to earn $8MM in base salary in 2018 and take up $10.91MM of the Patriots’ cap.

Here’s more from the AFC champions and the latest from the NFC East. 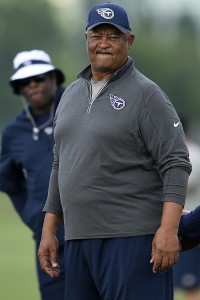 On the heels of a disastrous 2015 season, Mike Wells of ESPN.com isn’t so sure that Colts general manager Ryan Grigson will be his usual aggressive self when it comes to signing veteran free agents this winter. As Wells observes, Andre Johnson, Trent Cole, and Todd Herremans were among last year’s additions who didn’t live up to expectations for Indianapolis in ’15.