Previously rumored Falcons plans came to fruition Thursday. Arthur Smith will bring Dave Ragone aboard as his offensive coordinator, and the first-year Falcons coach has a big role planned for the recently retired Dean Pees. 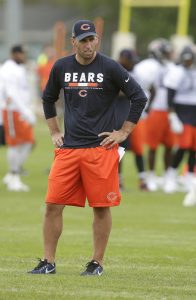 The former Titans defensive coordinator will again come out of retirement, committing to become the Falcons’ DC. The Falcons are also hiring Marquice Williams as their special teams coordinator.

While Pees and Smith served as Titans coordinators together in 2019, this will be Ragone’s first run as OC. Working as Bears QBs coach for the past five years, this will represent a move up for the ex-quarterback — the first known target for this post.

Ragone, 41, will not, however, have an immediate path to a play-calling role. Smith’s play-calling chops helped him draw interest from all seven head coach-seeking teams this year, and he confirmed he will call plays in Atlanta.

For Pees, this marks unretirement No. 2. Mentioned early as a likely to join Atlanta’s staff, Pees will skip any advisory or consulting roles and jump back into the play-calling fire.

Pees left his post as Ravens DC after the 2017 season but re-emerged as the Titans’ defensive boss ahead of the ’18 campaign. Pees, 71, stuck to retirement for a season this time around — which coincided with a Titans defensive regression — but will return to lead a fourth team’s defense. Pees served as Patriots defensive coordinator from 2006-09 and led the Ravens’ defense for six seasons beginning with their Super Bowl-winning 2012 slate. Of Pees’ 12 defenses, only one has ranked outside the top 12 in points allowed.

Williams has worked as assistant special teams coach with the Chargers and Lions, working in that capacity with Detroit for the past two seasons.

With the Eagles requesting an interview with Eric Bieniemy, the Chiefs offensive coordinator is now 7-for-7 in meeting requests during this hiring period. However, the third-year OC has again run into issues on the interview circuit. Despite being Andy Reid‘s right-hand man during the most successful period in Chiefs history, Bieniemy may go a third cycle without landing a coaching job. It is trending in that direction, Jonathan Jones of CBS Sports tweets. Bieniemy did not interview well on the whole last year and has encountered similar issues during this cycle, according to Tony Pauline and Benjamin Allbright of ProFootballNetwork.com.

Although the Texans changed course and submitted a request to speak with Bieniemy, as they deal with a disgruntled Deshaun Watson, CBS Sports’ Jason La Canfora notes that interview is doubtful to commence. With the Chiefs’ bye week over, any team wishing to meet with Bieniemy going forward must wait until Kansas City’s season ends. If the No. 1-seeded Chiefs make it back to the Super Bowl, the remaining jobs may be filled by then. Three teams have filled their positions; the Lions are soon expected to hire Saints assistant Dan Campbell; the Chargers may be zeroing in on Bills third-year OC Brian Daboll. This would leave only the Houston and Philadelphia jobs available. Though Bieniemy not being his team’s primary play-caller makes him an atypical HC candidate from the offensive side of the ball, it would certainly be strange if he exited another offseason without landing a coaching gig.

DeFilippo didn’t last long in the free agent coaching ranks after being let go by Jacksonville earlier this week. The 41-year-old spent only a single season with the Jaguars, leading an offense which ranked 24th in offensive DVOA and 26th in scoring.

In Jacksonville, DeFilippo was dealt an early blow when free agent addition Nick Foles went down in Week 1, but he was able to coax a reasonable performance out of sixth-round rookie quarterback Gardner Minshew. The Jaguars represented DeFilippo’s third OC job, and neither of his first two gigs (with the Browns and the Vikings) lasted more than one year, either.

In Chicago, DeFilippo will work alongside Ragone and new offensive coordinator Bill Lazor in an effort to right the Mitchell Trubisky ship. Head coach Matt Nagy will retain play-calling duty, but DeFilippo, Ragone, and Lazor will surely all have a hand in not only Trubisky’s continued development, but the Bears’ weekly game-planning.

Asked today during a press conference if he has confidence that cornerback Cortez Allen can be an impact player going forward, Steelers head coach Mike Tomlin admitted that he’s not convinced of that, per Gerry Dulac of the Pittsburgh Post-Gazette (Twitter link). Since signing a four-year, $24.6MM extension about a year and a half ago, Allen has struggled significantly — he was benched in 2014 and missed nearly all of the 2015 season with a knee injury.

While it’s possible that Tomlin’s comment was a motivational tactic for Allen heading into 2016, it seems more likely that the club simply plans on moving on from the cornerback. Releasing him this winter would only save $1.7MM against the cap, but the club could increase those savings for 2016 to $4.4MM by designating Allen as a post-June 1 cut and pushing some of his dead money to 2017.

As we wait to see what the Steelers plan on doing with Allen, let’s check in on a few more items from out of the NFL’s North divisions….