Former Jets head coach Todd Bowles has already been drawing interest as a potential defensive coordinator, and — perhaps unsurprisingly — Bowles’ most likely destination could the Buccaneers, provided that Bruce Arians (currently viewed as the favorite) lands the head coaching job in Tampa Bay, according to Josh Weinfuss of ESPN.com (Twitter link). If Arians is hired by the Bucs, he’s expected to “get the band back together” by hiring a number of his ex-Cardinals assistants. Bowles served as Arians’ DC in Arizona from 2013-14, leading units which each ranked top-seven in defensive DVOA. 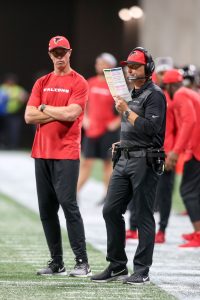 The Falcons have gone downhill since their Super Bowl run two seasons ago, sneaking into the playoffs as a six seed last year before falling apart this season. Injuries were partially to blame, but the team finished just 7-9 despite having a ton of talent, and regressed heavily on defense. The offense hasn’t been the same since Kyle Shanahan left to coach the 49ers, and Sarkisian had received a ton of criticism for his playcalling, especially in the red-zone. With the defense becoming one of the worst units in the NFL this season, it’s no surprise that Manuel was let go. The firing of Armstrong, who has been considered for head coaching jobs in the past, cements this as a total house cleaning.

According to Tom Pelissero of NFL Network (Twitter link), the Falcons will conduct searches for new offensive and special teams coordinators, but Quinn is expected to take over the defense. Matt Ryan has put up big numbers over the last couple of years but it hasn’t translated to wins.

Interestingly, Ian Rapoport of NFL Network tweets to “keep an eye on Gary Kubiak” for the offensive coordinator role, and James Palmer of NFL Network tweets that he’s heard the same. Kubiak, the former Texans and Broncos head coach who won a Super Bowl in Denver, has been rumored to be mulling a return to the sidelines as a coordinator. Owner Arthur Blank has expressed confidence in Quinn, but these moves clearly suggest that Quinn is feeling the heat. If he can’t get Atlanta back to the playoffs next year, he could be out of a job just a few years removed from an NFC Championship.

With the Giants, Colts and Lions all having head coaches likely to accept job offers, the Cardinals continue to talk to different candidates about their vacant head coaching gig. Today, the team has just completed a second interview with Falcons special teams coordinator Keith Armstrong and Panthers defensive coordinator Steve Wilks, according to Josh Weinfuss of ESPN.com (Twitter link) and Mike Jurecki of ArizonaSports.com (Twitter link).

Armstrong originally spoke to the team on January 8, but received a second interview request after it was revealed that other potential candidates Matt Patricia and Pat Shurmur would likely accept other jobs after their respective teams are eliminated from the postseason.

The 54-year-old Armstrong has held his special teams post in Atlanta since 2008. The Cardinals have been the only team that has requested to interview him for a head coaching role. On the other hand, Wilks has been spoken to a number of teams about their vacant head coaching gigs, including the Titans, who still have their spot open.

Falcons special teams coach Keith Armstrong will have a second interview with the Cardinals for their head coach position on Friday, sources tell Ian Rapoport of NFL.com (on Twitter). Armstrong first interviewed with the club on Jan. 8 and did well enough to warrant another look.

The Cardinals seem have at least three finalists for the job. Eagles quarterbacks coach John DeFilippo is coming back for a second interview and Patriots linebacker coach Brian Flores is also in line for another meeting. Steelers offensive line coach Mike Munchak was asked to come back for another powwow, but he declined the team’s invitation.

The Falcons interviewed Armstrong for their own head coaching position in 2015, but they ultimately wound up hiring Dan Quinn. This could be the offseason that Armstrong gets his opportunity to lead his own team, though he has some steep competition in quarterback whisperer DeFilippo plus others who have OC/DC experience like Steve Wilks of the Panthers.

We have a new name in the Cardinals’ coaching search. The Cardinals will interview Falcons special teams coach Keith Armstrong about their vacancy, Sam Farmer of the Los Angeles Times (on Twitter) hears. The interview will take place next week, as D. Orlando Ledbetter of the Atlanta Journal-Constitution tweets.

The Falcons interviewed Armstrong for their own head coaching position in 2015, a search that ended with the hiring of Dan Quinn. In the following year, there was speculation that Todd Bowles would try and lure him to the Jets as ST coordinator, but the Falcons were unwilling to allow him to make a lateral move. The Falcons are expected to OK the interview, though it will have to take place after Atlanta’s Wild Card game on Saturday.

Armstrong has more than 20 years of professional head coaching experience and is highly respected in NFL circles, but it’s not often that a special teams coordinator makes the direct jump to HC.

Arizona defensive coordinator James Bettcher will also be interviewed for the position.