The Chiefs have moved on from a former draft pick. Aaron Wilson of the Houston Chronicle reports (via Twitter) that Kansas City has cut special teamer Tremon Smith. The team will be promoting receiver Byron Pringle from the practice squad to take the open roster spot. 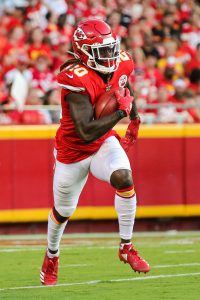 Smith, a 2018 sixth-round pick, broke onto the scene as a rookie after earning NFL All-Rookie Team honors as a return man. He ultimately finished the 2018 season having returned 33 kicks for 886 yards (26.8-yard average). However, he played sparingly on defense, compiling only five tackles and one pass defended in 14 games. The Chiefs also briefly experimented with him at running back during the preseason.

With the Chiefs in need of receivers following the injury to Tyreek Hill, it made sense to move on from Smith, although there’s a good chance the 23-year-old could land on Kansas City’s practice squad. For the time being, the Chiefs will likely turn to Pringle and De’Anthony Thomas for return duties.

Pringle, 25, joined the Chiefs in 2018 as an undrafted rookie out of Kansas State. He made his NFL debut in Kansas City’s season-opener, but he was let go earlier this week to make room for Thomas, who returned from suspension.