The Bengals have signed long snapper Clark Harris to a two-year-contract extension, according to a team announcement. In other Bengals news, the club promoted wide receiver Auden Tate from the practice squad to the 53-man roster and formally placed linebacker Carl Lawson on injured reserve.

Harris, 34, earned his first Pro Bowl nod last season. He has been with the club since 2009 and boasts a nearly perfect attendance record over the last ten decade.

Tate’s promotion will provide the Bengals with insurance as they await word on A.J. Green‘s toe. Green is relying on the advice of foot specialist Dr. Robert Anderson and the club is waiting to find out whether he’ll require surgery. Even if he doesn’t go under the knife, it’s expected that Green will miss some time.

Cincinnati and long snapper Clark Harris have reached an agreement on a contract extension, according to an official team announcement. The new deal will extend only through 2018, with the exact dollar amount and guaranteed dollars not yet known. 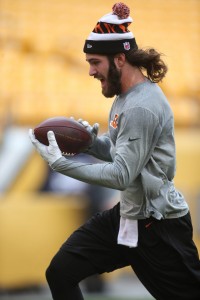 While the value of Harris’ his new contract remains to be seen, the highest-paid long snapper in the NFL this year is the Giants’ Zak DeOssie, who’s current deal pays him $1.57 MM per year, while guaranteeing him $200k per season.

Harris, 33, has been with the Bengals since 2009 after being drafted by the Packers in the seventh round in 2007. He’s one of the elder statesmen in terms of age at the position, although long snappers have a tendency to play well into their 30s if they establish themselves. The current median age of long snappers in the league is about 28 years old, so there really shouldn’t be too much concern that Harris’ reliability will diminish all too much next season.