The Washington Football Team has officially parted ways with Cody Latimer, per a club announcement. The move comes months after the wide receiver’s troubling incident in Colorado.

Authorities say that a May poker game turned ugly when Latimer got into a “heated argument” with someone else at the table. Latimer stormed out and returned 30 minutes later with a handgun. Latimer, they say, waved the gun around and threatened to kill everybody in the room. He later “emptied the magazine and cleared the chamber of his gun,” per the police report, but not before firing two shots in someone’s direction.

Latimer joined Washington after posting career-highs in catches (24) and receiving yards (300) with the Giants. Instead of jostling with fourth-round wideout Antonio Gandy-Golden for his spot in the pecking order, Latimer now finds himself out of a job.

Following his arrest in Colorado on Saturday morning, Redskins wideout Cody Latimer appeared at a court hearing yesterday morning, reports ESPN’s Adam Schefter and John Keim. Latimer was ordered to return for a July 24 court date. He’s facing five individual charges, including assault in the second degree, menacing, illegal discharge of a firearm, prohibited use of weapons, and reckless endangerment. Latimer was initially released from the Douglas County Jail on $25,000 bond on Saturday.

The police report states that Latimer was participating in a poker game at the home of one of his best friends, Roderick English. During that game, the NFL player got into a “heated argument” with another participant, at which point English ordered everyone to leave his apartment.

Latimer returned to the apartment about 30 minutes later and was “agitated and angry.” It was at this point that the 27-year-old pulled out a handgun, waved it around, and threatened to kill everybody in the residence. Latimer eventually “emptied the magazine and cleared the chamber of his gun,” but that was after he fired a pair of shots near English. The two also engaged in a physical confrontation, and English required medical attention after being hit in the head with the gun.

During Monday’s hearing, attorney Harvey Steinberg told the court that he had been contacted by law enforcement regarding “an investigation of a sexual assault of Latimer’s 4-year-old son that was allegedly perpetrated by one of the individuals at that poker game.” The shooting incident took place “at about the same time and location as the alleged sexual assault.”

Following a 2019 campaign that saw him compile career-highs in receptions (24) and receiving yards (300) with the Giants, Latimer joined the Redskins this offseason. While the veteran was expected to contribute on offense and special teams, ESPN notes that Latimer could end up losing his gig to fourth-round wideout Antonio Gandy-Golden.

Redskins wide receiver Cody Latimer was arrested in Colorado on Saturday morning, as Ryan O’Halloran of The Denver Post writes. He faces five charges, including three felonies and two misdemeanors.

Police in Douglas County responded to a call of shots being fired inside an apartment. No injuries were reported, but they believe Latimer was the shooter. He’s facing charges of assault in the second degree, menacing, illegal discharge of a firearm, prohibited use of a weapon, and reckless endangerment.

Latimer’s arrest comes on the heels of another troubling event in Florida, said to involve Seahawks cornerback Quinton Dunbar and Giants cornerback Deandre Baker. Like Dunbar and Baker, Latimer is subject to fines, suspensions, and other discipline from the league office, even if this ultimately does not result in a court case or a conviction.

Latimer, 27, was a second round pick of the Broncos in 2014. In Denver, they waited and waited for his big breakout season, but that never came. After four years with the Broncos, he moved on to the Giants in 2017. Last year, Latimer had 24 receptions for 300 yards and two touchdowns. For his career, he has a grand total of 70 catches for 835 receiving yards and six scores. He may, or may not, have an opportunity to build on those totals with the Redskins in 2020.

In addition to Latimer, the Redskins have Terry McLaurin, Kelvin Harmon, Trey Quinn near the top of their WR depth chart. They also replenished the group by drafting Liberty’s Antonio Gandy-Golden in the fourth round last month.

The Redskins have agreed to sign wide receiver Cody Latimer, as Mike Garafolo of the NFL Network reports (via Twitter). Latimer spent the last two years with the division-rival Giants.

Latimer was selected by the Broncos in the second round of the 2014 draft, and to say that he failed to live up to Denver’s expectations would be an understatement. Though he finally started to show some signs of life as a receiver in 2017, his last year in Denver — a year in which he averaged a healthy 15.1 yards per catch — he mostly stuck around because of his excellent work on special teams.

He hooked on with the Giants in 2018, but he missed 10 games that year due to injury. Still, he managed 17.3 yards per catch in limited action and had impressed Big Blue’s coaching staff during his first training camp with the team, so New York brought him back for another look in 2019.

Thanks to a thin and injury-ravaged WR corps, Latimer set career highs in starts (10), receptions (24), and yards (300). He may find similar opportunities with the Redskins, who have second-year pros Terry McLaurin and Kelvin Harmon at the top of their depth chart. McLaurin enjoyed an excellent rookie campaign, and Harmon showed some promise down the stretch, but Latimer could carve out a role for himself.

against the Packers while he deals with a concussion, according to Ryan Dunleavy of The New York Post. Tate sustained a concussion in last week’s 19-14 loss to the Bears on a touchdown reception and has been in the league’s protocol since.

Tate, signed this offseason by the Giants, has hauled in 36 receptions for 450 yards and 4 touchdowns over seven games this season. With Tate out and tight end Evan Ingram dealing with an injury of his own, expect New York to rely heavily on running back Saquon Barkley against the Packers.

According to the Giants depth chart, Cody Latimer is next in line to take Tate’s starting spot, but Darius Slayton started in place of Sterling Shepard while he was out with a concussion of his own. Regardless, this season’s revolving door of receivers has not made adjusting to the NFL any easier for rookie quarterback Daniel Jones, who has struggled mightily since a strong start to the season.

Patriots coach Bill Belichick is known for finding diamonds in the rough. He’s turned MAC quarterback Julian Edelman into a star receiver, and made numerous other brilliant discoveries. The draft apparently isn’t the only place he looks for these unheralded gems, as Zach Cox of NESN.com pointed out in a recent interesting piece. The Patriots are holding joint practices with the Lions right now, and Cox points out that Belichick always uses these joint practices to scout the opposing team’s players for guys he might want to pick up when they’re later cut.

“From 2012 to 2017, New England participated in 11 rounds of joint practices with seven different opponents. In all 11 cases, at least one member of the opposing team went on to sign with the Patriots,” Cox writes. That’s a pretty incredible streak, and it shows that the Patriots are paying extremely close attention during these joint sessions. It’ll be interesting to see which current member of the Lions ends up signing with New England later this year.

The Giants’ receiving corps will look quite different in 2019, but part of the previous group looks to be staying in the fold. 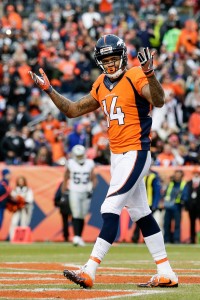 Cody Latimer revealed (via Instagram) he will be back with the Giants next season. Residing as a free agent after inking a one-year deal to join the Giants last season, Latimer is now in line to be part of the post-Odell Beckham Jr. Giants receiving corps.

This is likely another low-cost agreement for the Giants, who are thin on answers beyond Sterling Shepard and Golden Tate. Both Russell Shepard and Bennie Fowler previously joined Latimer as free agents. The Giants are bringing back RFA Corey Coleman, however. Latimer figures to join Coleman as depth.

A hamstring injury limited Latimer to six games last season, but despite the Giants being out of playoff contention during the season’s second half, they made him an IR-return candidate. Primarily known for his special teams work with the Broncos, the physically imposing target caught 11 passes for 190 yards and a touchdown during his Giants debut — which also came under former Broncos wideouts coach Tyke Tolbert.

A former second-round pick, Latimer has not panned out as a pass-catcher, having hauled in just 46 receptions for 635 yards in five seasons. This deal may not guarantee he makes the Giants’ roster, but it’s clear the organization likes what it saw during a limited sample last season.

Cody Latimer will return for the Giants’ final games in 2018. The wide receiver will be activated for Week 16, allowing him to play him against the Colts and Cowboys, as Matt Lombardo of NJ.com writes.

The Giants designated Latimer for return in late November, opening up a three-week window for activation. So far, he’s looked healthy on the practice field, and doctors have given him clearance to play again.

The Giants aren’t playing for much at this point, but this will be an opportunity for Latimer to play his way on to the 2019 roster. For now, he’s scheduled to reach unrestricted free agency in March after the expiration of his one-year, $2.5MM contract.

Latimer, 26, was enjoying an expanded role in the Giants’ offense against the Eagles on Oct. 11 before he went down with a hamstring injury. The wide receiver had six catches for 108 yards across four games before being sidelined.

The Giants will not have Latimer for Sunday’s game against the Titans and it remains to be seen whether they’ll have Odell Beckham Jr. for the contest. OBJ has been sidelined with a quad injury and did not practice on Wednesday morning.