The 49ers have ended the season of safety Antoine Bethea, according to Matt Maiocco of CSNBayArea.com, who reports that Bethea has been placed on the injured reserve list. The move clears a spot on the roster for wide receiver Jerome Simpson, who is returning from a six-game suspension.

Bethea, 31, hasn’t missed a regular season game since 2007, playing – and starting – an incredible 146 out of a possible 151 games over the course of his 10 NFL seasons. However, he’ll be sidelined for the final nine games of the Niners’ 2015 campaign due to a shoulder injury.

Bethea left Thursday night’s game against the Seahawks with the shoulder issue, and was having an MRI conducted today, so we can assume the results of that MRI weren’t great. Safety Jaquiski Tartt looks like the best bet to take over for Bethea’s job for the second half of the season, assuming the leg injury he sustained on Thursday isn’t serious.

As for Simpson, the Niners had been granted a roster exemption for the suspended wideout, allowing the team to keep him on the reserve/suspended list for an extra few days, following his six-game ban. Now that he’s on the 53-man roster, the ex-Viking will be eligible to play in San Francisco’s next game.

The 49ers have been granted a one-game roster exemption for wide receiver Jerome Simpson, who is coming off of suspension, as Cam Inman of the Mercury News tweets. Simpson, who was suspended for three games to start the 2014 season, served his latest penalty as a result of a July incident in Bloomington, Minnesota.

Along with Torrey Smith, Simpson was one of the free agents brought in this season by Baalke and company to replace a slew of departing players, including receivers Michael Crabtree, Stevie Johnson, and Brandon Lloyd. Some were surprised that San Francisco signed Simpson soon after their release of Ray McDonald, but the club is presumably confident that the wide receiver will stay on the straight and narrow.

3:46pm: Simpson’s suspension was initially going to be for 10 games, but was reduced to six games through the appeal process, tweets Adam Schefter of ESPN.com.

3:37pm: An offseason littered with bad news for the 49ers got a little worse for the club today. Niners wide receiver Jerome Simpson has been suspended six games for violating the NFL’s policy and program on substances of abuse, the team announced today in a press release.

Simpson, who was suspended for three games to start the 2014 season, faces his latest penalty as a result of a July incident in Bloomington, Minnesota. The veteran receiver initially faced misdemeanor charges of marijuana possession, driving with an open bottle and violating limited license restrictions for that legal run-in last July.

“The probability of a suspension was known when we signed Jerome,” general manager Trent Baalke said, per Cam Inman of the San Jose Mercury News. “Since joining the 49ers, Jerome has proven to be a great teammate. … Although he will not be able to participate in the first six weeks of the season, Jerome has done everything asked of him, both on and off the field. We are in full support of the NFL’s decision, and look forward to Jerome’s future contributions to our organization.”

Along with Torrey Smith, Simpson was one of the free agents brought in this season by Baalke and company to replace a slew of departing players, including receivers Michael Crabtree, Stevie Johnson, and Brandon Lloyd.

THURSDAY, 4:36pm: After hosting him for a free agent visit, the 49ers have reached an agreement to sign wide receiver Jerome Simpson, reports Field Yates of ESPN.com (via Twitter). Financial terms of Simpson’s new deal aren’t yet known, but it’s a two-year contract, per a team release.

Simpson, 29, was suspended for the first three games of the 2014 season after he was arrested for a DUI, and was subsequently released by the Vikings before he became eligible to return to the field. Simpson has been arrested three times since 2012, and the fact that the 49ers are willing to bring him on board shows that the club isn’t inclined to shy away from players with off-field red flags following the release of Ray McDonald.

The 49ers are expected to significantly overhaul their receiving corps this offseason, with Michael Crabtree and Brandon Lloyd heading to the open market and Stevie Johnson a likely cap casualty. Adding Simpson almost certainly won’t be the last move the team makes to address the group this month.

The Eagles officially announced on Wednesday that they’ve released Trent Cole from his contract, and the veteran edge defender didn’t waste much time in scheduling his first free agent visit. According to Adam Caplan of ESPN.com (via Twitter), Cole is meeting with the Buccaneers, a team that runs a 4-3 system. Having played in the Eagles’ 3-4 scheme for the last two years, Cole is viewed as a better fit as a defensive end for a 4-3 club, and Tampa Bay is certainly in need of an outside pass rusher.

As we wait to see if anything comes of Cole’s visit with the Bucs, let’s check in on a few more free agent updates from around the NFC….

Dolphins’ defensive end Dion Jordan has been reinstated and suspended again, due to a separate failed drug test. The team is still supporting Jordan, although there was a report that they shopped the former first-round pick this offseason, in order to gauge his trade value.

One team that inquired as to Jordan’s availability was the Eagles, and Jordan’s former college coach Chip Kelly. The Eagles were interested in acquiring Jordan via trade, and called up the Dolphins’ front office shortly after Dennis Hickey accepted the job of general manager, reports Armando Salguero of the Miami Herald.

The Dolphins had no interest in trading Jordan at that time, but Salguero wonders if the recent suspensions have created a missed opportunity for Hickey to get out from a bad investment.

The Vikings announced (via Twitter) that they have released wide receiver Jerome Simpson. Simpson was slated to return in Week 4 after the completion of his suspension, but Minnesota wasn’t interested in welcoming the veteran back. 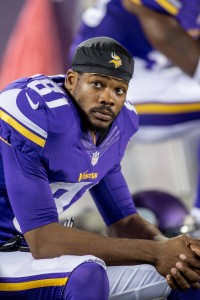 Simpson was suspended for the first three games of the 2014 season after he was arrested for a DUI in November of last year and he apparently still has more legal trouble ahead of him. It was reported earlier today that Simpson has a November arraignment scheduled for misdemeanor charges of marijuana possession, driving with an open bottle, and violating limited license restrictions, related to a July incident in Minnesota.

The 28-year-old set a career high last season for receiving yards and was two catches shy of his best season ever in that category, but his off-the-field troubles hurt his negotiating leverage and his checkbook this offseason. Ultimately, he saw his salary chopped from $2.1MM in 2013 to $1MM in 2014 and he said in June that he was surprised by that.

“I can’t lie. I was definitely surprised that I get paid less than what I got last year,” Simpson said. “I had my best numbers. But I guess when you got that negative thing on you, they kind of got you behind the eight-ball.“

The 28-year-old hauled in 48 catches for 726 yards and one touchdown in 2013. While the Vikings can’t afford to lose offensive talent from a football perspective in the wake of the Adrian Peterson situation, they also couldn’t afford another public relations hit given the events of the past week. Also, as far as their receivers go, they can still lean heavily on the likes of wide receiver Cordarrelle Patterson and tight end Kyle Rudolph.

One of the NFL’s biggest spenders in the offseason, the Buccaneers made a significant splash in free agency, adding Josh McCown, Anthony Collins, Michael Johnson, Alterraun Verner, and others. So far, that spending spree hasn’t had much of an impact on the field, as the Bucs head into tonight’s game in Atlanta with an 0-2 record. As John Clayton of ESPN.com observes, that’s not unusual. In recent years, any of the teams that spend most lavishly in free agency don’t see their records improve much – or at all – the following season.

Here’s more from around the NFC, as look forward to tonight’s matchup of NFC South squads: