The John Denney era could be over. On Monday morning, the Dolphins released their long snapper and longest-tenured player.

Denney, 40, was re-signed in February, setting the 40-year-old up for a 15th season in Miami. The good news is, that could still happen – the Dolphins are not rostering any other long snappers at the moment, so this could just be a bit of roster juggling from the Dolphins. Before the end of business on Tuesday, we should have a better picture of the Denney’s future.

Denney also boasts a streak of playing in 224 consecutive games, which is the longest active streak in the NFL. He’s tied for the longest streak ever for a long snapper and he’ll own that record outright if he plays somewhere in Week 1.

The Dolphins have re-signed long snapper John Denney, according to Cameron Wolfe of ESPN.com (on Twitter). Denney has been with the ‘Fins since 2005 and is the club’s longest-tenured player. 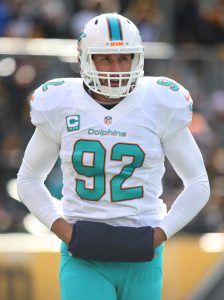 Denney, 40, hooked on with Miami as an undrafted free agent out of BYU and has not missed a game in his entire career. His perfect attendance record and steady hands have kept him employed in sunny Miami for 14 seasons, and he’ll be back for a 15th year in 2019.

Denney also boasts a streak of playing in 224 consecutive games, which is the longest active streak in the NFL. He’s tied for the longest streak ever for a long snapper and he’ll own that record outright if he plays in Week 1.

One of the 14 members of the NFLPA’s selection committee responsible for re-electing executive director DeMaurice Smith, Dolphins long snapper John Denney said the No. 1 issue among his constituents — as the team’s union rep — is guaranteed money. The contracts annually doled out to NBA and MLB talents, in leagues with fewer players, include far more guarantees than NFLers’ deals. That issue eclipsed personal conduct complaints, Denney said (via Adam Beasley of the Miami Herald).

“You can’t have it all, so what’s at the top of the list?” Denney said, via Beasley, in an apparent defense of Smith’s handling of the 2011 CBA — one that granted Roger Goodell with the controversial disciplinary powers he holds. “It really does boil down to money. It does affect some guys, but it’s a very few amount of guys. The union has to make decisions for all of the current players. You’ve got 1,500, 1,600 players. How many of those players are dealing with off the field issues? You’re going to tell these 1,600 players, ‘Are you willing to give us this money so eight or nine players a year won’t have to deal with the things they’re dealing with? You still want to go to bat for your guys, but you’ve got to make decisions on what’s best for the group.”

Here’s the latest from around the league going into this season’s Sunday of action.

The Dolphins have re-signed long snapper John Denney, reports agent Ian Greengross (via Twitter). The 38-year-old is now set to play his 13th-straight seasons with the organization.

Denney joined the Dolphins as an undrafted free agent in 2005, and he’s proceeded to play in every single one of the team’s games since that time. The former Brigham Young University defensive end has compiled 41 tackles during his NFL career along with one forced fumble and three fumble recoveries. The long snapper was named a team captain during the 2016 season.

The player’s older brother, Ryan Denney, was a long-time defensive end for the Bills.