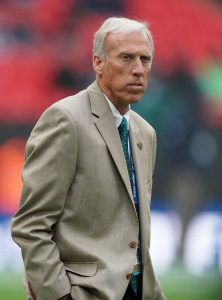 Former Jets general manager John Idzik will be headed back to New York this weekend when his current team, the Jaguars, takes on his former team. The current special assistant won’t be talking to the media, but Mark Cannizzaro of the New York Post wonders if the executive will feel a bit jealous at his former employer’s current success.

Of course, some in the organization recognize Idzik’s contribution to this current squad.

“I’m sure Idzik wants to come here and just stick it in our [butts],’’ said linebacker Trevor Reilly. “I would, too, if I was him. But he drafted me. He drafted a lot of us in here. You always say you hope for the best for the guy, but obviously not this week. I don’t think Idzik’s a bad guy. I’m grateful he drafted me. I might not be here if he didn’t.

“Some of the moves we’ve made this season I’m assuming Mike [Maccagnan] would credit Idzik for — for clearing cap space the last two seasons. So, in that aspect, I guess we as a team can thank Idzik for clearing all that cap space. I think we were $25 million under the cap last year.’’

There was a mixed reaction among league executives to reports that veteran wideout Reggie Wayne visited the Patriots, tweets Albert Breer of the NFL Network.

“He’ll be in great shape – always takes car of himself,” said one AFC executive. “Tremendous pro and teammate. Health has been issue past two years. Great hands and routes. Did not have a lot left in his legs last year and struggled. Will struggle vs press – very savvy vs zone. New England has history of getting some production out of players like him.”

“Possession guy with hands and savviness but loss of speed and explosiveness evident,” said another AFC exec. “Maybe as a role player, but don’t see him as a starter solution.”

In a Wednesday mailbag, a reader asked Troy E. Renck of The Denver Post why the Broncos didn’t make more of a push to sign La’el Collins. According to Renck, the lack of a resolution for Collins’ potential criminal case gave Denver pause during the draft — the team shied away from him in the seventh round more because of that uncertainty, not because of the lineman’s vow that he wouldn’t report if he was drafted on Day 3.

Once Collins became a free agent, he narrowed his choices rather quickly to teams with proven quarterbacks, coaches and line coaches. Denver offered all of those things, but Collins didn’t want to play in cold weather and wanted a team close to home, leading him to the Cowboys.

Of course, given today’s news on Ryan Clady‘s torn ACL, the Broncos may be regretting not rolling the dice on Collins with one of their seventh-round picks.

The Jaguars are expected to hire former Jets GM John Idzik as a consultant, a source tells Adam Schefter of ESPN.com (on Twitter). Ryan O’Halloran of the Florida Times-Union (on Twitter) hears from a source that Idzik will focus on focus on the salary cap and cash spending. Idzik will consult Tim Walsh, the team’s Director of Football Administration, in the Jags’ salary cap department, O’Halloran tweets.

The position sounds well-suited to Idzik, who made his name as a cap guru with the Seahawks but fell flat as the GM of the Jets. Idzik isn’t the most popular guy in the New York area, but recently Seahawks GM John Schneider told the press that he doesn’t think Idzik got a fair shake in New York.

“I felt bad for him. I think that, it’s just my personal opinion that you should be able to hire a head coach,” the Seattle GM said back in January.

After two bad seasons in New York, it’ll be a while – if ever – before we see Idzik land another GM job in the NFL. However, this job will give him the opportunity to get back to doing what he does best. Rich Cimini of ESPN.com hears that he won’t have any involvement in player evaluation.

On Tuesday at media day, Darrelle Revis was asked it must be like for a Jets fan to watch him play on game’s biggest stage after making a name for himself for his first six seasons in New York. Revis didn’t have much in the way of consolation for fans of Gang Green. “It’s not really my fault,” Revis said, according to Mike Petraglia of WEEI.com. “I didn’t make the call. Management made the call at that time and they felt it was best to get rid of me. So that’s the situation. That’s how I look at it.” More on the Jets..

MONDAY, 7:30am: The Jets have officially informed Ryan he has been fired, tweets Jay Glazer of FOX Sports. The Jets themselves have confirmed as much (via Twitter), adding that Idzik’s firing has been made official as well.

SUNDAY, 11:10pm: Not that this should come as much of a surprise as Black Monday approaches in the NFL, but the Jets and owner Woody Johnson are prepared to fire head coach Rex Ryan and general manager John Idzik, according to Chris Mortenson of ESPN (via Twitter).

Mortenson writes that Idzik will be fired as expected, and that Johnson will not keep Ryan hanging as to wait on the next general manager to decide that.

In the recent days, Pro Football Rumors has monitored the situation with the Jets’ head coach and front office very closely, constantly updating on the hirings Johnson has made and the general feeling surrounding both Ryan and Idzik.

Ryan was 45-50 as head coach of the Jets, including this disastrous 2014 season which saw the team win only four games. In his first two seasons, Ryan and quarterback Mark Sanchez won four road playoff games en route to back-to-back appearances in the AFC Championship game.

It was reported over the weekend that Johnson’s consultants had already made calls concerning available coach and general manager candidates, so the move does not come as a shock.

Ryan will be a highly desired coach on the open market this offseason, according to Jason Fitzgerald of OverTheCap.com (via Twitter). Fitzgerald does believe Ryan will do better long term if he sits out a year before coming back to coaching.

A PFR poll tallied in mid-October had a majority of readers believing Ryan would most likely be working in TV in 2015, but a significant number thought he would still be coaching in the NFL somewhere, with those votes split amongst a few teams.

Atlanta seems like the obvious fit, and after being embarrassed today against the Panthers and failing to make the playoffs, Mike Smith could be out as head coach there. Owner Arthur Blank reportedly considered Ryan a front runner back when that job was open in the first place.

Idzik’s tenure with the Jets was far less celebrated, lasting only two seasons with the team. It would be difficult to imagine him achieving another general manager job in the NFL anytime soon, but he could go back to Seattle – where he had past success – or pursue another front office job with an NFL team.

The Jets have an 8 A.M. meeting scheduled for tomorrow, reports Brian Costello of the New York Post (via Twitter). Any changes the team plans on making should be announced by that time.

Here is a look at some of those potential changes and the fallout that will come from them:

We’ve already passed along the news of front office executive Nick Caserio’s extension with the Patriots and a batch of Jets notes, but there’s more news from the AFC East…

The 3-12 Jets will take on the Dolphins later today, and it’s probably the last contest general manager John Idzik and head coach Rex Ryan will enjoy under the employ of Gang Green. According to Manish Mehta of the New York Daily News (Twitter link), owner Woody Johnson is expected to “hit the reset button,” and start the search for the duo’s replacements tomorrow. Ryan could be fired tonight, tweets Ian Rapoport of NFL.com, who says Ryan is so sure he’s being axed that he’s been joking about it with colleagues. Here’s more from New York.