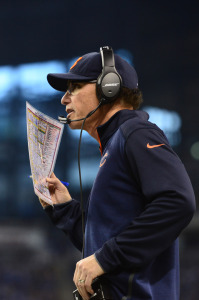 Trestman, 61, was hired as Chicago’s head coach prior to the 2013 season, and led the Bears to an 8-8 season and, perhaps more impressively, a No. 6 rating in offensive DVOA. The bottom fell out during the following campaign, however, as Chicago stumbled to 5-11 record. Trestman and general manager Phil Emery were both fired after that 2014 season.

A longtime offensive coach in both the collegiate and pro ranks, Trestman quickly found a new job, as he was hired as the Ravens’ offensive coordinator prior to the 2015 campaign. Baltimore’s offense struggled under Trestman’s watch, though, and he was let go following Week 5 and replaced by Marty Mornhinweg.

Defensive end Mario Williams needs to “play better” and “play harder,” Dolphins D-coordinator Vance Joseph told reporters, including Chris Perkins of the Sun-Sentinel, on Thursday. After the AFC East rival Bills released Williams in March, the Dolphins quickly signed the 2006 No. 1 overall pick to a two-year, $17MM deal. Williams, 31, has underwhelmed on the stat sheet in Miami, where he has picked up just seven tackles in a sack in five games. While Pro Football Focus grades Williams’ overall performance a decent 44th among 99 qualifying DEs, his production is way down since last season. Over his past 20 games, Williams has recorded a meager 26 tackles and six sacks.

Quarterback Colin Kaepernick is set to return to the 49ers’ starting lineup this week, but his NFL future was in doubt as recently as last year. At least two teams that looked into Kaepernick as a potential trade acquisition had questions about whether he wanted to continue playing, reports Albert Breer of TheMMQB. Kaepernick ended up staying in San Francisco, of course, and will now take over head coach Chip Kelly‘s offense. If Kaepernick fails under Kelly, the league might not regard the 28-year-old as a viable option anymore, writes Breer, who notes that his career hangs in the balance. “This offense gives him the best chance, no doubt,” one 49ers source said of the mobile Kaepernick, who could become a free agent at season’s end.

Marc Trestman is out in Baltimore and it may not have been John Harbaugh‘s doing. Ravens owner Steve Bisciotti had a strong hand in firing the offensive coordinator, sources tell Jason Cole of Bleacher Report (video link). Furthermore, sources say that Trestman’s relationship with Joe Flacco became strained this year and that was likely a factor in the ouster of Trestman. Flacco had a similar rift with former Ravens offensive coordinator Cam Cameron in 2012. 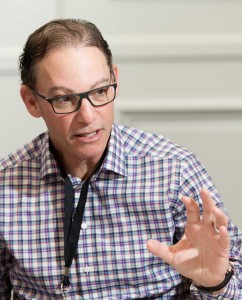 When asked about Bisciotti’s role in Trestman’s dismissal this week, Harbaugh denied that the decision was made solely upstairs. However, as Cole notes, Bisciotti has been with the team at practice a lot more than usual in recent days.

The Ravens are firing offensive coordinator Marc Trestman, league sources tell Adam Schefter of ESPN.com (on Twitter). Baltimore is replacing him with Marty Mornhinweg. The team has since confirmed the move via press release. 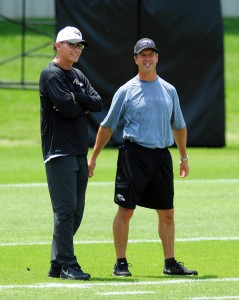 Trestman’s firing comes one day after the Ravens suffered a 16-10 loss at home against the Redskins. After the game, quarterback Joe Flacco described the offense as “embarrassing” and said that the struggles so far this year have been “frustrating.” Apparently, team brass agreed and Trestman has been sacked five games into the season.

Trestman previously served as the Bears’ head coach from 2013 through 2014. After the Bears finished 8-8 in Trestman’s first year, they took a step back in 2014 with a 5-win season. Trestman was canned after the season, but the Ravens quickly scooped him up as their offensive coordinator.

Last year, the Ravens finished 14th in the NFL in total yards but placed in the bottom third of the league in points scored. Through five games this year, they’re roughly in the same position and the Ravens have opted to make a change. Mornhinweg, who previously served as Baltimore’s quarterbacks coach, will now get bumped up to OC. Mornhinweg has served as an offensive coordinator for three different teams (Jets, Eagles, and 49ers) in his career and is best known for his time as the head coach of the Lions, although that is a period he’d probably like to forget.

The Ravens will put a strong emphasis on maintaining balance on offense and sticking with the run game while reinforcing the downfield passing game, Jason La Canfora of CBSSports.com tweets. The Ravens can be expected to lean on Terrance West and they could also get Kenneth Dixon more involved as they look to spark their run game.

Earlier this week, the NFL reinstated Patriots employee Jim McNally from suspension for his role in the DeflateGate scandal. McNally may not be totally out of the woods yet, though, as new allegations against him have come to light. Former official Mark Baltz, the league’s head linesman from 1989-2013, told WTHR.com that he was always suspicious of McNally, according to John Breech of CBSSports.com.

“[McNally] was always worried about the footballs. Always,” Baltz stated. “It was very odd. I reported him to the league, but never got any reaction from them. I don’t think they thought it was a big deal at the time. But [McNally] did things that 31 other locker room attendants don’t do.”

Baltz said he reported McNally to the league six to eight years ago.

“All I know is, when he got [the footballs], he would run. He would take off,” Baltz added. “Whether he was going somewhere and letting air out, I’m definitely suspicious, but I don’t know for sure.”

Most expect the Bills’ starting quarterback in 2015 to be either Matt Cassel or EJ Manuel, but don’t discount Tyrod Taylor, writes Conor Orr of NFL.com. Taylor, who backed up Joe Flacco in Baltimore from 2011-14 and signed with the Bills as a free agent earlier this offseason, has a fan in head coach Rex Ryan. Although Taylor has thrown just 35 passes in his pro career, Ryan recruited the 25-year-old to Buffalo and views his dual-threat abilities as a plus in coordinator Greg Roman’s run-first offense, notes Orr.

Bills general manager Doug Whaley said earlier this week that all three QBs are going to get a real chance to win the No. 1 job prior to the season.

“The way they’re structuring practices everyone is getting a run with the ones,” Whaley stated. “So it’s a fair shake. In this system that we’re trying to figure out who is going to be the number one it’s all about competition. That’s why everybody involved is excited about it.”

Here’s more on the Bills and a couple of their fellow AFC teams:

Ron Wolf‘s biggest transaction during his tenure as Packers general manager was his acquisition of Brett Favre. Wolf sent a first-round pick to the Falcons to acquire the young quarterback, but that move may have never happened had former Jets GM Dick Steinberg had his way.

ESPNNewYork.com’s Rich Cimini spoke to Wolf following his nomination for the Pro Football Hall of Fame. The 76-year-old reflected on his first employment with the Jets, when he was a member of the front office. The organization fell in love with Favre, and when the Southern Mississippi quarterback fell to the second round, the team made a deal with the Cardinals to move up two spots.

“Dick thought he had a deal with Arizona,” Wolf said. “Fortunately for me and unfortunately for the Jets, when he called Arizona to finish the deal, they backed out because a player they wanted was still there.”

Of course, the rest is history. The Falcons selected Favre as the 33rd pick in the draft (the Jets selected Louisville quarterback Browning Nagle with the next pick), and the young player was traded to Green Bay a season later.

Following a career that featured stops with the Giants and Jets, former NFL linebacker Pepper Johnson is returning to New York. The 50-year-old will be joining Todd Bowles staff as the Jets‘ defensive line coach, the team announced.

3:31pm: It’ll be a three-year agreement for Trestman and the Ravens, tweets Ian Rapoport of NFL.com.

2:31pm: Marc Trestman, who was let go by the Bears at season’s end, has become the third 2014 head coach today to land a new job with another team. According to Adam Schefter of ESPN.com (via Twitter), Trestman will replace Gary Kubiak in Baltimore, having been hired as the Ravens’ new offensive coordinator.

Despite a nightmarish season in Chicago which saw Jay Cutler under fire from critics and resulted in Trestman losing his job, the Bears’ offense actually ranked in the top half of the league in DVOA, finishing 14th after placing sixth in 2013. The offense never fully came together and produced consistently in 2014, but Trestman had success with Cutler and Josh McCown the year before, and Chicago’s poor defensive play played a larger part in the team’s overall struggles than the offense did.

After being fired by the Bears, Trestman reportedly interviewed with the Jaguars and Browns, and was mentioned as a possible target for a couple other clubs in the market for an offensive coordinator. While his disappointing stint with the Bears didn’t earn him interviews for other head coaching jobs, the 59-year-old still has a strong resumé as an offensive coach, having previously acted as the offensive coordinator for the Browns, 49ers, Cardinals, and Raiders.

Once it became clear that Kubiak was headed to Denver to become the Broncos’ new head coach, the Ravens reportedly identified Adam Gase and Rick Dennison as potential offensive coordinator candidates. However, Dennison followed Kubiak to the Broncos to become the new OC in Denver. As for Gase, a report earlier this week indicated that he was likely to land with either the Ravens or Jaguars, so perhaps Baltimore’s hiring of Trestman opens the door for Gase to land in Jacksonville — he still has multiple suitors though.