Mike Pennel will not end up playing for the Bears this season. The team moved the defensive tackle to IR Tuesday, also placing safety Jordan Lucas on its season-ending injured list.

Both Pennel and Lucas were members of the Chiefs’ Super Bowl-winning squad two years ago. While Pennel also contributed for the Chiefs’ 2020 AFC champion team last season, Lucas opted out. These IR placements will ensure neither plays with the Bears this season, though both could resurface in 2021 in the event injury settlements take place.

Pennel participated in the Bears’ minicamp on a tryout basis, and the team was sufficiently impressed. The 30-year-old defender has seven years’ experience, having played with the Packers and Jets before his Kansas City stay. The former UDFA has enjoyed quality stretches, which have continued to generate interest. His 2019 arrival helped a Chiefs defense on a historically bad run early that season.

Lucas started four games for the 2018 Chiefs, who acquired him via trade with the Dolphins. Those are his only four career starts. The Bears signed the ex-UDFA in 2020, but he is unlikely to play in a regular-season game for the team.

Mike Pennel has found his next gig. The veteran defensive tackle is signing a one-year deal with the Bears, according to his agent, Andy Simms (via Twitter).

The 2014 undrafted free agent has managed to put together a solid seven-year career, starting games for the Packers, Jets, and Chiefs. He spent the past two seasons in Kansas City, including a 2019 campaign where he started a pair of playoff games en route to a Super Bowl championship. After serving a two-game ban to start the 2020 season, Pennel saw time in 14 games (one starts) with the Chiefs last year, collecting 29 tackles and one QB hit. He also saw time in each of Kansas City’s three playoff contests, collecting a single tackle.

We heard earlier this week that the 30-year-old was trying out for the Bears. The team could be looking for some extra reinforcement along the defensive line after nose tackle Eddie Goldman decided to no-show mandatory minicamp.

The Bears have invited some well-known guests to their minicamp. They are working out five players — including tight end Jake Butt, cornerback E.J. Gaines and defensive tackle Mike Pennel — at their three-day mandatory session, Brad Biggs of the Chicago Tribune tweets.

This marks Butt’s second known workout of the offseason. The Michigan alum auditioned for the Cardinals recently. Although Butt starred for the Wolverines not that long ago, he has battled rampant injury trouble as a pro. The former Broncos draftee now has three career ACL tears, two coming in Denver, and has played in just eight games in four seasons.

Mixed signals have come out of Chicago regarding the team’s interest in adding a veteran cornerback. The Bears were believed to be interested in Bashaud Breeland, but he signed with the Vikings, and had Steven Nelson on the radar. But new DC Sean Desai also expressed confidence in his in-house cover men. Gaines has 38 career starts but has not played in a game since the 2018 season. The former Rams draftee opted out in 2020.

The Bears are also working out two players who recently participated in The Spring League — tight end Sal Cannella and Tyrone Wheatley Jr. The team lists Wheatley as an offensive lineman, though the second-generation NFL hopeful played tight end at Michigan — as one of Butt’s backups — and Stony Brook. Chicago’s minicamp is scheduled to run through Thursday.

Already set to be without Bashaud Breeland for four games, the Chiefs are also slated to begin their Super Bowl title defense without defensive tackle Mike Pennel.

Kansas City re-signed Pennel to a one-year deal in March, doing so after the 330-pound interior defensive lineman played a key role in the team’s late-season defensive performance. Pennel played well as a run defender for the Chiefs, with Pro Football Focus giving him a top-20 grade in this area among interior D-linemen last season. Although Pennel only played 154 regular-season snaps, he saw action on 52 defensive plays in the playoffs.

This will be Pennel’s seventh NFL season. The Chiefs initially signed him in October 2019, doing so after the Patriots cut him during training camp. He helped turn the tide after Kansas City’s run defense delivered a historic futility stretch during the season’s first half.

The defending Super Bowl champs have re-signed defensive lineman Mike Pennel to a one-year pact, as Tom Pelissero of the NFL Network reports (via Twitter). Pennel said last month that he wanted to return to the Chiefs, and he got his wish.

Besides winning a Super Bowl with KC — and his interception-causing hit on 49ers QB Jimmy Garoppolo was a big reason for that win — the organization also helped to revitalize Pennel’s career. Following two underwhelming seasons with the Jets, the lineman signed a two-year deal with the Patriots last offseason. However, he didn’t make it to the regular season with New England, and Pennel still found himself out of work in mid-October.

He eventually caught on with the Chiefs, and he proceeded to compile 24 tackles and one sack in eight games for the team. He also appeared in each of Kansas City’s three playoff games, starting two of them, and he earned high praise for his work against the run. Pelissero reports that Pennel had other offers — the Cowboys were said to be in on him — but he will try to recapture the magic with the Chiefs.

Terez A. Paylor of Yahoo Sports reports that KC is also re-signing FB Anthony Sherman to a one-year deal (Twitter link). Sherman has appeared in every game for the Chiefs since he joined the club in 2013, and he earned a Pro Bowl bid in 2018. His offensive snaps have decreased dramatically since Patrick Mahomes became the starting QB, but he remains a critical part of the special teams unit. 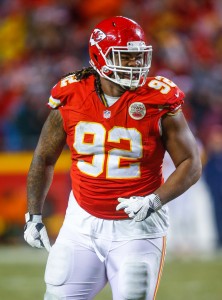