The Lions lost to the Colts on Sunday, and they picked up a couple of significant injuries while doing so. Defensive end Trey Flowers is going on injured reserve and as such will miss at least the next three games, the team announced Monday.

Meanwhile star receiver Kenny Golladay picked up a hip injury that will sideline him this week and have him week to week moving forward, sources told Ian Rapoport of NFL Network (Twitter link). Rapoport noted in a follow-up tweet that IR is a possibility for him as well. The team views Flowers’ stint as a short-term one, Tim Twentyman of the team’s official site tweets.

It sounds like he’ll be back before too long, but it’s still a big blow. Signed to a five-year, $90MM pact last March, Flowers is the anchor of Detroit’s already underwhelming pass-rush. The former Patriot has two sacks and two forced fumbles through seven games this year. Fortunately the team just traded for Everson Griffen, and now they’ll really need him.

Golladay of course is the team’s top receiver, and this is a big setback for the offense. Golladay missed the first couple of games of the season with a hamstring issue, but had at least 105 yards in back to back games before going down against the Colts. Hopefully both will be back on the field as soon as possible.

The official Flowers numbers are in. It’s a five-year, $90MM deal for the former Patriots defensive end, NFL.com’s Tom Pelissero reports (via Twitter), adding Flowers will receive $56MM guaranteed and $40MM fully guaranteed at signing. All of that fully guaranteed cash will come Flowers’ way by 2020, per Albert Breer of SI.com (on Twitter). Flowers will earn $28.88MM in 2019 and $54.37MM in the first three years of this deal. 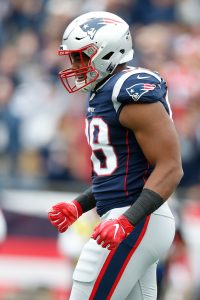 Flowers was one of the top defenders available on the market this year, and it was reported this morning that the Bills were interested in his services. The Jets and Dolphins were also rumored to be interested in the soon-to-be former Patriot, but he instead opted to reunite with Matt Patricia in Detroit to bolster a pass rush that definitely needs some help.

Flowers won’t turn 26 until August, so he has the chance to build on an already impressive resume. Last year, he set a new career high with 7.5 sacks and continued to generate pressure against opposing QBs. He graded out as the sixth-best edge rusher in the entire NFL according to Pro Football Focus, and he posted a career-best 88.7 overall score. That mark put him below only Calais Campbell, Khalil Mack, J.J. Watt, Von Miller, and Cameron Jordan.

The Lions were expected to be active in free agency, and they have not disappointed. Flowers is the biggest addition the club has made so far, but they also signed Danny Amendola this morning and are expected to sign Justin Coleman.

The Bills are internally discussing the idea of pursuing Trey Flowers, according to ESPN.com’s Josina Anderson (on Twitter). Flowers will be one of the most coveted free agents when the market opens on Wednesday, so this would be a costly endeavor for Buffalo.

The Jets have also been heavily connected to Flowers, so it’s quite possible that he’ll remain in the AFC East.

Here’s a look at the latest from the AFC:

The Patriots are not expected to apply the franchise tag to any of their notable free agents, as Field Yates of ESPN.com and Adam Schefter of ESPN.com tweet. This means that defensive end Trey Flowers and offensive tackle Trent Brown are on target to reach free agency in a week. As previously reported, kicker Stephen Gostkowski won’t be receiving the tag either. 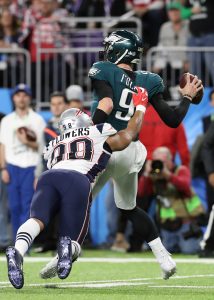 If Flowers does not re-sign with New England, the rival Jets could be among Flowers’ top suitors. The Jets have the second-highest cap room total of any team in the league and are in desperate need of pass rushers.

Brown, meanwhile, has been vocal about his desire to remain with the Pats. However, the Patriots tend to be thrifty when it comes to bidding against other teams and tackles of Brown’s caliber figure to see major dollar signs this offseason. On Tuesday, Bucs tackle Donovan Smith re-upped on a three-year, $41.25MM deal that surely has Brown’s camp salivating.

Big changes have occurred in Miami, and more are coming. The Dolphins are expected to shed the contracts of Ryan Tannehill, Robert Quinn, Andre Branch and Josh Sitton (and perhaps more notable names). But the rebuilding team may look to add an impact player familiar with Brian Flores‘ philosophies. The buzz in Indianapolis has led DraftAnalyst.com’s Tony Pauline to call the Dolphins the favorites for Trey Flowers, a prospective UFA who helped the Patriots reach the past three Super Bowls. New England’s top pass rusher may stand to benefit from the likely franchise tags the Cowboys, Texans, Seahawks and Chiefs apply to DeMarcus Lawrence, Jadeveon Clowney, Frank Clark and Dee Ford. This marketplace could place Flowers in position to push for a near-$20MM-AAV deal, despite sack numbers that don’t correspond with such a pact. However, the Patriots will make a strong attempt to retain their top edge defender. It may take an atypical Patriots contract to keep him, though.

Here is Thursday’s latest coming out of the AFC East (via Indianapolis):

In 2017, Browns defensive coordinator and now interim head coach Gregg Williams made a strong push for the team to take Texas A&M pass rusher Myles Garrett with the No. 1 overall pick rather than take a quarterback.

On Friday, he reiterated that stance, saying he would still take the standout defensive end over quarterbacks like Deshaun Watson, Patrick Mahomes and Mitch Trubisky, Mary Kay Cabot of the Cleveland Plain Dealer writes.

“Yes, I would,’’ said Williams. “I really like (Garrett). They had me evaluate the quarterbacks, too, and they had me evaluate a lot of the top players on the other side of the ball. You do good things like that in successful organizations. Get the opinion of a defensive guy on an offensive guy. Get the opinion of an offensive guy on a defensive guy. You are trying to find all of the little itty bitty things before you make the final decision, I think those are important.”

Regardless of what he would or wouldn’t do, it looks like the situation is going to work out well for the Browns. Instead of taking a quarterback a year ago, the team tabbed Baker Mayfield with the top spot and have recorded the same amount of wins this season as the previous three combined (four).