Washington GM Bruce Allen held his year-end press conference today and was put in a position where he more or less had to defend his job, as Mike Florio of Pro Football Talk writes. At the presser, Allen defended the signing of free agent defensive end Jason Hatcher and putting the franchise tag on linebacker Brian Orakpo. Orakpo was given the franchise tag despite a serious injury history and Hatcher was given a lucrative deal despite mild production prior to his walk year. Here’s more from around the league in our New Year’s Eve edition of Extra Points..

The Packers are hoping to get a new deal done with defensive tackle Letroy Guion in the New Year, Rob Demovsky of ESPN.com writes. The Packers got a great value off of his one-year, $1MM deal and they want to re-up, even though the next contract will surely cost them more.

“Letroy has been everything we thought he was going to be,” Packers coach Mike McCarthy said recently. “I’ve always had a lot of respect for Letroy in Minnesota. I think he’s come over to us, and I think he’s taken his game up a notch. He’s an excellent fit in the locker room; teammates love him. He’s an excellent teammate and he’s a damn good football player.”

The 6’4″, 315-pound former fifth-round pick had career-highs in tackles (62) and sacks (3.5) this season after coming over from Minnesota. While a new deal might not be struck in the next couple of days, agent Seth Katz says that discussions of a new pact are underway.

“We’ve had some very, very early conversations,” Katz said. “The Packers are obviously focused on the postseason, but we know how they feel about him, and they know he wants to be back. We’re not making it a secret that he wants to stay in Green Bay.”

After B.J. Raji tore his right biceps tendon, Guion stepped up in a major way, making his presence felt and making the Packers aware of his true value. Guion started all 16 games at the nose tackle position instead of Raji, who is also a free agent. While Raji has an unclear future at this time, it’s clear that the Packers want Guion to be a part of theirs.

Pro Football Focus (subscription req’d) hasn’t been all that impressed with Guion this season, rating him No. 61 out of 81 qualified nose tackles in 2014.

7:43pm: The Bills have yet to decide on whether they’ll bring in a football czar and who it might be, whether it’s Polian or Mike Holmgren or someone else, according to Ian Rapoport of NFL.com (on Twitter). Marrone could have worked out a lucrative extension with the Bills, but he was nervous about signing on without knowing who the top boss would be (link).

5:39pm: The Bills will hire Bill Polian as their team president, according to Jason La Canfora of CBSSports.com (on Twitter). The move may not be announced until January, however, due to his other commitments. Polian currently serves as an NFL analyst for ESPN and presumably will tie up some loose ends in Bristol.

“Doug Marrone informed me late today that he has decided to exercise the option clause in his contract and relinquish his responsibilities as our head coach. “We are disappointed that Coach Marrone will no longer be an important part of our organization. We thank him for all of his hard work and leadership during his tenure and wish him and his family the best with the next chapter in their lives. We will now begin the important process of conducting a thorough search for a new head coach as we continue to strive to reach our goal of returning to the playoffs and bringing a championship to Buffalo for our fans.”

5:29pm: Bills coach Doug Marrone has opted out of his contract, according to Adam Schefter of ESPN.com (on Twitter). Marrone, surprisingly, gets to pocket his 2015 salary even though he’s headed elsewhere (link).

Marrone asked the Pegula family for an extension and was rebuffed, leading to his exit, according to Tim Graham of The Buffalo News (on Twitter). Marrone also asked for extensions for his assistant coaches and was shut down. While he didn’t get what he wanted, the former Syracuse coach did get to walk away with his full $4MM paycheck thanks to a very advantageous contract clause negotiated by agent Jimmy Sexton. 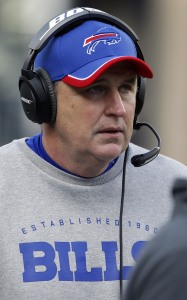 Marrone is now a free agent at a time when several NFL teams are looking for new head coaches. The Jets will have strong interest in him, according to Ian Rapoport of the NFL Network (on Twitter). Meanwhile, the Bills will have their eye on Chargers offensive coordinator Frank Reich. The Jets already satisfied the Rooney Rule by interviewing Anthony Lynn earlier today, so they could theoretically hire Marrone right away.

The Bills went 9-7 this year under Marrone – their first winning season since 2004 – and 6-10 in 2013. In total, he has a 15-17 record as an NFL coach. Marrone, of course, first made a name for himself as the head coach at Syracuse, where he guided the lowly Orange to a 25-25 mark and two bowl appearances over the course of four seasons. While his win-loss totals may not be the prettiest, Marrone found success with a very hard-nosed defense this past season and should draw widespread interest from around the NFL. One has to imagine that he could already have his next opportunity lined up.

NCAA underclassmen have a little over two weeks to declare for the 2015 NFL draft, and several have done so already. Our list of 2015’s early entrants can be found right here, and we have some more names to add to that list today. Here’s the latest on college players forgoing their remaining NCAA years and heading to the NFL:

Fallout From Doug Marrone Opt Out

Earlier today Doug Marrone shocked many when he opted out of his contract with the Bills. Marrone’s deal included an opt out that still grants him his $4MM salary for 2015 and allows him to pursue other head coaching jobs immediately. The latest on the league’s newest coaching candidate..

As they prepare for this Sunday’s Wild Card game against the Bengals, the Colts have moved offensive lineman Gosder Cherilus to the injured reserve list, ending his season, the team announced today. Guard David Arkin has been promoted from the practice squad to the 53-man roster to take Cherilus’ place.

Cherilus, 30, started 13 of the team’s 14 games for the Colts this season at right tackle before being slowed by groin and shoulder injuries, appearing in all but three offensive snaps in those 13 contests. Now that he’s slated to be out for any and all postseason games Indianapolis plays, Joe Reitz looks like the most likely candidate to step in and take over at right tackle.

A former first-round pick, Cherilus remains under contract with the Colts through 2017, though his cap hit jumps from $3.9MM this year to $6.9MM in 2015. We’ll have to wait and see if the club intends to keep him on board at that rate, particularly after a season in which he recorded a subpar -16.8 grade, according to Pro Football Focus’ metrics (subscription required).

Already cited as a candidate for multiple head coaching jobs, Ravens offensive coordinator Gary Kubiak told reporters today that he isn’t currently thinking about those opportunities (link via Jamison Hensley of ESPN.com). According to Kubiak, his entire focus is on winning this Saturday’s game against the Steelers.

“I told you guys before that I’m consumed with what I’m doing,” Kubiak said. “It’s not time for stuff like that. It’s always flattering as a coach to be mentioned by any organization in football. My total focus is on our football game and trying to enjoy what I’m doing right now.”

As our head coaching search tracker shows, the Bears and Jets have requested an interview with Kubiak, so perhaps if the Ravens lose this weekend, those two clubs will have a chance to speak to him next week.

Here are a few more coaching-related updates, as we get ready to turn the page on 2014:

Chargers general manager Tom Telesco addressed reporters in an end-of-season press conference today, and Michael Gehlken of the San Diego Union-Tribune passed along several of the GM’s more notable comments. Here are the highlights from the presser, with all links headed to Gehlken’s Twitter account:

We’ve passed along a couple rounds of coaching-related rumors already today, but with teams looking ahead to the 2015 season, some front-office shakeups could occur as well. Let’s check in on the latest updates on front offices around the NFL…