In the wake of Avery Williamson‘s unfortunate ACL tear, the Jets are making a move. The team is signing linebacker Albert McClellan, a source told Ian Rapoport of NFL Network (Twitter link). 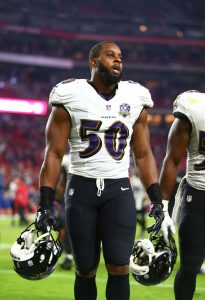 Williamson’s injury left the Jets thin at linebacker, so this move makes some sense. McClellan spent the first nine seasons of his career with Baltimore, but was cut by the Ravens early on last season. He latched on with the Patriots and spent the last couple months of the year with New England, ultimately earning his second Super Bowl ring in the process.

McClellan has always been known as an elite special teamer, but he’s also capable of playing defense. He missed the entire 2017 campaign with an ACL tear, but he started 11 games in 2016. For his career, McClellan has appeared in 103 games and made 24 starts. He played almost exclusively on special teams for the Pats, making only four tackles in seven games.

McClellan certainly won’t be able to replace Williamson, who was supposed to be the Jets’ defensive signal-caller, by himself. But he is a decent cheap depth piece to add this late in the process, and can contribute in a pinch. That being said Williamson was Pro Football Focus’ No. 18 traditional linebacker last season, so this move doesn’t come close to making them whole.

Cut to make room for Ty Montgomery on the Ravens’ roster, Albert McClellan may not be going back to Baltimore as he did previously this year.

The Patriots worked out McClellan on Monday and plan to sign the free agent defender, Jeff Zreibec of The Athletic reports (Twitter links.)

The Ravens cut McClellan, who’s been a key special teams presence and part-time starter at linebacker for most of this decade in Baltimore, out of training camp but re-signed him in mid-September. The Ravens wanted to bring back the 32-year-old veteran again, per Zreibec, but their injury situation didn’t give them room for such a move in their view.

It appears McClellan will return to New England after his workout. McClellan’s only played for the Ravens in an eight-year career. He played in 96 Baltimore games, making 24 starts, and saw action in all four playoff games en route to the franchise’s Super Bowl XLVII victory.

A team known somewhat for valuing special-teamers, the Patriots were also missing Nicholas Grigsby due to an illness in Week 9 and have rookie Ja’Whaun Bentley on IR.

The Ravens are expected to re-sign linebacker Albert McClellan, according to Jeff Zrebiec of The Athletic (Twitter link).

Baltimore needs help at the second level after starting middle linebacker C.J. Mosley was carted off the field with a bone bruise near his knee on Thursday night. While Mosley isn’t expected to face a long-term absence, it’s unclear exactly how long he’ll be out. With Mosley sidelined, the Ravens moved Patrick Onwuasor to middle linebacker and deployed rookie Kenny Young on the weak side.

McClellan, 32, offers plenty of experience with the Ravens, as he’d been with the club since 2011 before being released at final cutdowns. While he’s primarily served on special teams, McClellan has been called on to play defensive snaps in the past. In both 2012, and 2016, McClellan started 11 games as an injury replacement. Overall, McClellan has appeared in 90 games and managed 98 tackles.

After nine years in Baltimore, Albert McClellan will be looking for a new home. Jeff Zrebiec of The Atlantic reports (via Twitter) that the Ravens have released the veteran linebacker.

The move is a bit surprising considering McClellan’s tenure with the team, but the move seems to make sense for the Ravens. The 32-year-old is getting up there in age, and he missed the entire 2017 campaign due to a torn ACL. However, he arguably had his mostly productive NFL season in 2016, when he finished with a career-high 55 tackles in 16 games (11 starts). The 2010 undrafted free agent out of Marshall will now have to find another gig if he hopes to play this upcoming season.

With the release, undrafted rookie linebacker Chris Board seems to have a good chance of making the team. Otherwise, the team would only have three inside linebackers in C.J. Mosley, Patrick Onwuasor, and Kenny Young. The team is also rostering Bam Bradley, who is on the PUP.