Rashaad Penny‘s IR placement has made Chris Carson the sole focal point of the Seattle backfield, but the 11-3 team is looking at potential supplementary options.

The Seahawks brought in former backfield cog Robert Turbin and ex-Texan Alfred Blue for workouts, Field Yates of ESPN.com tweets. Carson logged 24 carries Sunday against the Panthers, with backups C.J. Prosise and Travis Homer combining for seven. Penny had earned a bigger role in the backfield as the season progressed, due partially to Carson’s fumbling issues.

Now 30, Turbin has not played in a game in over a year. He was last with the Seahawks during the 2014 season, serving as one of Marshawn Lynch‘s backups. Bobby Turbo was a Colt from 2016-18, his best Indianapolis work coming in a seven-touchdown 2016 season. He did not score more than one TD in each of his other six NFL seasons. He met with the Raiders in April.

Blue, 28, has only played for the Texans. He also has not suited up in a 2019 game. Last season, the longtime backup/occasional starter averaged 3.3 yards per carry.

The Jaguars have signed running back Alfred Blue, per a team announcement. Blue is presently set to serve as a backup behind starter Leonard Fournette, though much can change between now and September. 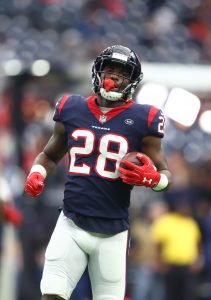 Blue, 28 in April, saw his usage fluctuate over the course of five seasons with the rival Texans. After logging 183 carries and nine starts in his second NFL season, Blue was dialed back to more of a reserve role between 2016-2018. Last year, he got 150 carries, but averaged just 3.3 yards per try.

Blue, 27, did his best work in 2015 when he rushed for 698 yards in nine starts for Houston. The addition of Lamar Miller reduced his role, however, and he was decidedly less effective in 2017 and ’18.

He’ll be no higher than the No. 2 RB in Jacksonville, but an opportunity to start might not be far off given Fournette’s injury struggles. 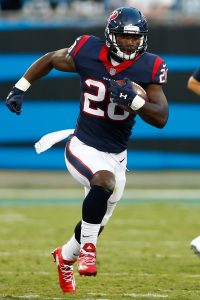 Alfred Blue is officially back with the Texans. Houston has re-signed the running back to a one-year deal, Aaron Wilson of The Houston Chronicle tweets.

The Texans will start Lamar Miller at running back, but Blue will help to provide support further down the depth chart, particularly with D’Onta Foreman recovering from a torn Achilles. As a No. 3 or No. 4 RB, Blue would offer occasional relief for both players while also pitching in on special teams.

Blue, 27, did his best work in 2015 when he rushed for 698 yards in nine starts for Houston. The addition of Miller reduced his role, however, and he was decidedly less effective last year. In 2017, Blue played on 21% of the Texans’ offensive snaps but managed only 3.7 yards per carry.

Things were pretty quiet for Blue this offseason, though he reportedly did hear from multiple teams, including the Steelers. Ultimately, the Texans circled back to him after they did not select an RB in the draft. It’s still possible that they could sign veterans or UDFAs to compete with Blue for a spot as a backup running back, however.

Alfred Blue remains on the free agent market, but the Texans remain open to a return. The door is not closed on the running back, Aaron Wilson of The Houston Chronicle tweets, as the team looks to improve its depth in the backfield.

The Texans will start Lamar Miller at running back, but there are question marks further down on the depth chart, particularly with rising sophomore D’Onta Foreman recovering from a torn Achilles. As a No. 3 or No. 4 RB, Blue would offer occasional relief for both players while also pitching in on special teams.

Blue, 27 in April, did his best work in 2015 when he rushed for 698 yards in nine starts for Houston. The addition of Miller reduced his role, however, and he was decidedly less effective last year. In 2017, Blue played on 21% of the Texans’ offensive snaps but managed only 3.7 yards per carry.

Things have been fairly quiet for Blue in recent months, though he has reportedly heard from multiple teams, including the Steelers. At this stage, Blue probably won’t sign with the Texans or any other club until after the draft when teams have a better idea of what they already have in-house.

Chiefs receiver Dwayne Bowe will be suspended for the season opener as a result of his marijuana possession arrest last November, reports ESPN’s Adam Schefter (via Twitter). Meanwhile, Bowe is dealing with a “shot” finger, as Andy Reid told the KC Star’s Terez Paylor.

Here’s some more miscellaneous links from around the league: