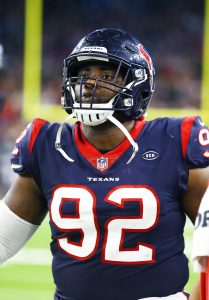 Brandon Dunn‘s stint in Houston has come to an end. The Texans are releasing the veteran defensive tackle, according to Aaron Wilson of SportsTalk790 in Houston (via Twitter).

The former undrafted free agent caught on with the Texans in 2015, and he’s remained in Houston for the past six years. The veteran inked a three-year, $12MM deal with the organization last February, and he proceeded to have one of his best NFL seasons. In 13 games (13 starts), Dunn collected 26 tackles and three QB hits. His season ended on IR after he suffered a fractured hip, but Wilson notes that the 28-year-old has made a full recovery.

“Yeah, surprised,” Dunn responded when asked for his reaction to the move (via Mark Berman on Twitter). “Like anybody, it always surprising to get released, but it’s a business and I understand.”

Dunn ultimately saw time in 72 games (37 starts) for Houston, collecting 114 tackles, eight tackles for loss, nine QB hits, and one sack. He also played in four postseason games for the Texans, including a 2019 start where he picked off Andrew Luck.

Even with Dunn out of the picture, the Texans have a muddled depth chart at defensive tackle. Any of Maliek Collins, Vincent Taylor, Ross Blacklock, Auzoyah Alufohai, DeMarcus Walker, Roy Lopez, or Jaleel Johnson could jump the depth chart by the start of the regular season.

A fractured hip forced Brandon Dunn to miss the final three games of the 2020 campaign, but the Texans defensive lineman is confident that he’s now 100-percent healthy.

“It’s been a long journey…and I’ve handled it and basically taken care of it the whole offseason,” Dunn said to Aaron Wilson of Sports Talk 790 (via Twitter). “Due to COVID and everything, it’s not an injury during a normal year…there really weren’t any days off.

The former undrafted free agent out of Louisville has been with the Texans since 2015, and he’s had a consistent spot in the middle of Houston’s defensive line since 2017. Dunn has started 37 games for the Texans over the past four seasons, collecting nine QB hits and eight tackles for loss. He started a career-high 13 games this past season, finishing with 26 tackles, three QB hits, and one fumble recovery.

Dunn inked a three-year, $12MM extension with the Texans during the 2020 offseason, so there’s a good chance he’ll be sticking around Houston for the foreseeable future. However, Dunn is also one of the few players from the previous regime, and the front office has made it clear that they’re willing to move on from anyone. While the 28-year-old sounds confident in his ability to get back on the field, he’ll have to show it to secure his roster spot.

Damon Harrison got cut by the Lions, but he’s not quite ready to call it a career. ‘Snacks’, as he’s affectionately known, had publicly contemplated retirement back in December. He won’t be returning to Detroit but Harrison doesn’t want to hang up his cleats and wants to continue playing, a source told Tom Pelissero of NFL Network (Twitter link). Back in December Harrison revealed that injuries were taking their toll on him. “I got too much pride, man. I’ve been doing this too long. So if I can’t be the player that I’m used to being, I think my teammates deserve better, my family deserves better … I never cheated the game a day of my life, man,” an emotional Harrison said as he reportedly fought back tears.

“My mind’s still telling me I can do it,” he said, “but my body’s just not good.” Harrison is apparently feeling better now, and is ready to test the open market. His play fell off last year as he dealt with health issues, but just a couple years ago the defensive tackle was one of the best run stuffers in the league. 31 now, Harrison was a first-team All-Pro in 2016 with the Giants. He released a statement on Twitter thanking the Lions, and calling the split a mutual parting of ways. He won’t get a huge contract, but he’ll draw some interest in free agency.

The Texans have signed nose tackle Brandon Dunn to an extension, per a club announcement. Before the deal, Dunn was set to reach free agency in March.

After starting his career with the Bears, Dunn joined the Texans midway through the 2015 season. In 2017, he became a rotational regular as he appeared in every game, including eight starts. Over the last three years, Dunn has compiled 75 total tackles, including five tackles for a loss and one sack from the interior.

Dunn’s new deal helps to address one item on their defensive line to-do list. The Texans are looking to keep interior bruiser D.J. Reader under contract, but there’s still a sizable bridge to be gapped. Reader might not be a big name for most, but he could command something in the vicinity of Brandon Williams‘ 2017 deal with the Ravens. In other words, the Texans might have to pony up about $55MM over the course of five years with more than half guaranteed. Failing that, Reader may be a candidate for the franchise tag.

The exact terms of Dunn’s pact are not yet known.

Texans kicker Ka’imi Fairbairn has signed his second-round restricted free agent tender, according to Aaron Wilson of the Houston Chronicle (Twitter link). Defensive tackle Brandon Dunn and linebacker Brennan Scarlett, each of whom was tendered at the original round level, also inked their tenders, per Wilson.

Restricted free agents have until Friday to sign offer sheets, but it was always unlikely that a rival club would sacrifice a second-round pick to sign a kicker such as Fairbairn. Still, the Texans thought enough of Fairbairn to assign him a second-round tender, which costs nearly $1MM more than an original round tender. For Fairbairn, he’ll see his base salary increase to $3.095MM, a significant raise for a player who earned less than $1.5MM over the first three years of his career.

A 2016 undrafted free agent out of UCLA, Fairbairn became the Texans’ kicker in 2017 after spending his rookie campaign on injured reserve. Last year, he led the NFL in both field goal attempts and conversions while ranking 13th in field goal percentage. Football Outsiders‘ ranked Houston eighth in its field goal/extra point metric.