The Jaguars have placed long snapper Carson Tinker on injured reserve with a knee injury. To replace him, they have signed free agent Matt Overton. 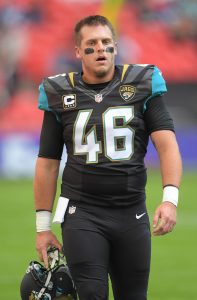 Tinker is no stranger to the IR, having suffered a torn ACL prior to the 2017 season. It’s the same knee this time around, but the good news is that it is not another torn ACL. It’s unclear as to whether Tinker will be a candidate to return from IR later this year or whether the Jaguars may consider releasing him with an injury settlement.

Overton was the Colts’ long snapper from 2012-16 and was considered to be one of the best at his position. He appeared in 16 games in each of his seasons with Indy and earned a Pro Bowl nod in 2013. He replaced Tinker last season in Jacksonville before landing on IR in November with a shoulder injury.

The Jaguars and their new/old long snapper will on the Cowboys in Dallas on Sunday.