The Chargers have agreed to bring back free agent offensive lineman Chris Hairston, according to Michael Gehlken of the San Diego Union-Tribune, who reports that the two sides have struck a new two-year deal. 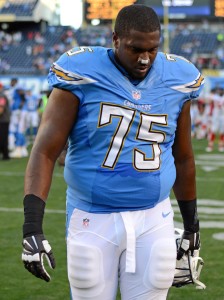 Hairston, who turns 27 in April, was one of the few San Diego offensive linemen who didn’t miss time due to injuries during the 2015 season, despite getting pretty banged up over the course of the year. Originally expected to be the team’s swing tackle, Hairston ultimately played nearly 800 offensive snaps for the Chargers, seeing playing time at guard and tackle on both the left and right sides of the line.

Pro Football Focus, which grouped Hairston with the offensive tackles, ranked him 65th out of 77 qualified players at the position. Despite his unspectacular grades as a run- and pass-blocker, Hairston should be a valuable depth piece for the Chargers in 2016, given his versatility, though he’ll likely enter camp as a backup once again.

Hairston is the second offensive tackle to re-sign with the Chargers this month — starting tackle Joe Barksdale inked a new four-year contract with the club. The team has also re-signed backup quarterback Kellen Clemens and veteran tight end Antonio Gates, and added wide receiver Travis Benjamin to the offense.

On the other side of the ball, the Chargers have signed defensive tackle Brandon Mebane, safety Dwight Lowery, and cornerback Casey Hayward.

Free agent nose tackle Steve McLendon is taking a visit today with the Jets, reports Ian Rapoport of NFL.com (Twitter link), citing agent Richard Kopelman of KLASS Sports. New York has a hole at the nose tackle position after Damon Harrison signed a five-year deal with the Giants, and while McLendon could be a nice fit, the Jets don’t have a ton of cap flexibility, so we’ll see if they can make something work.

The Steelers, meanwhile, still have interest in retaining McLendon, who has spent his entire six-year career in Pittsburgh. However, the veteran defensive lineman wants to test the market, tweets Jeremy Fowler of ESPN.com.

Here’s more on free agents around the NFL:

Let’s take a look at some notes from around the league as the second wave of free agency starts to heat up:

Free agent safety Stevie Brown, who is said to be close to deciding on where to sign, visited the Texans yesterday, tweets Ian Rapoport of NFL.com. Houston already signed one free agent safety this offseason, adding Rahim Moore, so we’ll see if the club makes a play for Brown, who may prefer the Giants if everything is equal.

4:05pm: Hairston’s deal with the Chargers is a one-year contract, reports Eric Williams of ESPN (via Twitter). Hairston will be able to earn up to $1.235MM in 2015.

2:29pm: The Chargers have signed Chris Hairston to add depth to their offensive line. Hairston announced the move on his Instagram account.

The team likely values his versatility, as Hairston played both guard and tackle for the Bills, and projects as a swing tackle in San Diego. He played for Chargers offensive line coach Joe D’Allesandris in Buffalo, notes Michael Gehlken of the U-T San Diego (via Twitter).

Gehlken expects Hairston to be the primary backup for multiple positions along the offensive line. Hairston hadn’t played significant snaps since 2012, but held his own when he was able to see the field for the Bills that year, according to Pro Football Focus (subscription required).

Multiple teams are interested in former 49ers starting defensive lineman Ray McDonald, according to SFGate.com’s Eric Branch. The 49ers released McDonald, who played eight seasons in San Francisco with the last four coming as a starter, last December after his arrest for suspicion of felony domestic violence.

The 30-year-old McDonald’s pursuit of a career elsewhere will probably have to wait until his case is resolved, agent Tom Condon told Branch.

In other news across the league’s Western divisions …

As the clock continues ticking toward the start of NFL free agency on March 10, a resolution between the Patriots and star cornerback Darrelle Revis draws nearer. Although Revis is signed through next season, his cap number is an unpalatable $25MM. Both that and Revis’ $20MM salary become guaranteed Tuesday if the Patriots don’t take action by then, which – worst-case scenario – would mean releasing the six-time Pro Bowler and four-time First-Team All-Pro.

The two sides are expected to engage in negotiations for a long-term contract before the deadline, but a source informed Mike Florio of Pro Football Talk that those discussions haven’t yet begun. Revis and his camp will enter negotiations cognizant of what he’d receive as a free agent on the open market, Florio opined, also speculating that the 29-year-old might take less on a long-term deal to remain with the reigning Super Bowl champions. Per Florio, Revis “wouldn’t like it” if New England were to keep him in 2015 on his current contract, but he’d forgo a holdout, suit up for the Pats and become a free agent in 2016.

Elsewhere around the AFC. . .

As two teams from the AFC East – the Bills and the Jets – continue to hunt for a new head coach, let’s check in on a few unrelated items from out of the division….