More changes are coming to the Steelers’ coaching staff. After they announced a few days ago they wouldn’t be bringing back linebackers coach Joey Porter, the team announced in a tweet they weren’t retaining running backs coach James Saxon. 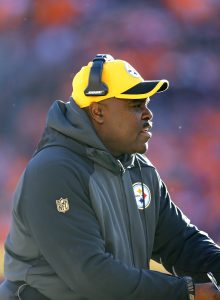 Steelers coach Mike Tomlin is shaking up his staff after a disappointing season where Pittsburgh missed the playoffs and the team became embroiled in internal drama. While Tomlin’s job is safe, he’s clearly starting to feel a little bit of heat as things seem to be falling apart in Pittsburgh.

After going one and done in the playoffs last season, the team didn’t bring back offensive coordinator Todd Haley. Now the team is letting go multiple assistant coaches, and it’s definitely possible they aren’t done. After the announcement about Porter, Mike Florio of ProFootballTalk.com, wrote that it felt “like a warning shot” to Tomlin from ownership, and that the decision on his assistant coaches might not be his.

Steelers offensive line coach Mike Munchak is reportedly the early favorite for the Broncos’ head coaching job, so next year’s Steelers coaching staff could look radically different. The team is reportedly set to trade Antonio Brown, so it looks like an offseason of change for Pittsburgh.