The Cardinals re-signed veteran wide receiver Kendall Wright, according to a team announcement. The Cardinals had two vacant roster spots prior to signing Wright, so no one had to be dropped in order to accommodate the deal. 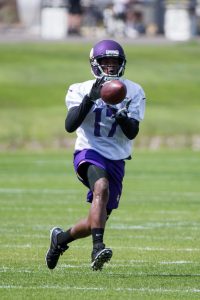 Wright, a 5’10” veteran receiver, originally signed with the Cardinals on Oct. 8 and was inactive for one game prior to his release ten days later. Wright offers 82 games of NFL experience, but he has probably lost a step or two since his early days with the Titans.

Wright was originally signed in order to bolster the receiving corps while Larry Fitzgerald was dealing with a hamstring injury. After Fitzgerald caught eight passes for 102 yards and a touchdown on Sunday against the 49ers, Arizona is confident about the 35-year-old’s health. This time around, Wright is on the roster to provide overall depth at the position.

With Wright in the fold, the Cardinals have six receivers on the roster as he rejoins Fitzgerald, Christian Kirk, Chad Williams, J.J. Nelson, and Trent Sherfield.

The Cardinals released wide receiver Kendall Wright on Thursday, per a team announcement. In his place, the club promoted cornerback Deatrick Nichols from the practice squad.

Wright was signed just ten days ago, with Nichols being waived to create room on the roster. It’s not uncommon for teams to juggle veterans each week depending on needs, so it’s possible that Wright could be back soon with Nichols back on the waiver wire.

Wright, ostensibly, was signed as insurance in the slot for Larry Fitzgerald. But, Fitzgerald is a go for Thursday night despite his hamstring and back issues, so Wright was no longer needed in Arizona.

The Cardinals, with Nichols on the roster, will face the Broncos in a Thursday night matchup that could have serious implications for the losing team.

Kendall Wright spent the preseason with the Vikings but didn’t make the team. He’ll now join the team that’s playing the Vikings on Sunday.

Having gone from leading the Bears in receiving last season, to being a Vikings preseason cut, to traversing the workout circuit, Wright will begin his seventh NFL season with the campaign more than a quarter complete. His latest such workout came with Arizona in mid-September. The 28-year-old wideout also auditioned for the Patriots, Redskins and Jaguars.

Since Wright is primarily a slot receiver, this is an interesting fit. The Cardinals typically use one of the greatest wideouts in NFL history in the slot, but Larry Fitzgerald has been battling a hamstring issue.

Fitzgerald’s been playing through it but hasn’t contributed his usual stellar work for the Cards just yet (17 receptions, 176 yards, no touchdowns). However, Arizona’s offense struggling as a whole is also contributing to Fitz’s stat lines. Josh Rosen completed just 10 passes on Sunday in the Cardinals’ first 2018 win.

Should he play in a regular-season game with the Cards, this will be Wright’s third team. The Titans used a first-round pick on the former Baylor pass-catcher in 2012 and employed him for five years, the last two with Wright being a marginal contributor. He signed with the Bears last season and caught 59 passes for 614 yards and a touchdown last season. Wright’s best work came back in 2013, when he hauled in 94 passes for 1,079 yards. He scored a career-high six touchdowns in 2014.

The Cardinals worked out Kendall Wright and other (as yet unidentified) free agent receivers this week, but don’t plan to sign any of the pass-catchers, head coach Steve Wilks told reporters, including Darren Urban of AZCardinals.com (Twitter link).

Wright inked a one-year, $1MM deal with the Vikings this spring that contained $400K guaranteed, but he was cut loose earlier this month. Scheduled to be Minnesota’s slot receiver between Adam Thielen and Stefon Diggs, Wright was beaten out by former first-round pick Laquon Treadwell for a starting spot. Given his lack of special teams prowess, Wright didn’t hold much appeal as a reserve for Minnesota.

Wright’s fit with the Cardinals also could have been suspect, as he’s played primarily in the slot throughout this career. In Arizona, that role is held by future Hall of Famer Larry Fitzgerald. A former first-round pick, Wright spent five years with the Titans before landing with the Bears in 2017. The lone bright spot in an otherwise dismal passing attack, Wright posted a team-leading 59 receptions and 614 yards in his only season with Chicago.

Since being cut by the Vikings, Wright has auditioned for the Patriots, Redskins, and Jaguars.