Nick Foles, who remains out indefinitely due to a broken left clavicle bone that was suffered last week against the Chiefs, had surgery this past Monday. During the procedure, Foles had plate and screws utilized while fixing the clavicle to ensure long-term health, and a source said it was a clean, straight-forward break, according to NFL.com’s Ian Rapoport.

In preparation for his return, Foles will have multiple scans before setting foot on the field, with all parties wary of a re-break. Assuming everything heals properly, he’ll begin practicing the week before the Houston game in Week 9, then have the bye, then be back with the Jaguars Week 11.

Filling in for Foles is rookie Gardner Minshaw, who was named the league’s Rookie of the Week for his admirable performance against the Chiefs last week. Minshaw will remain the starter for the foreseeable future.

Lets’ check out some more injury notes from around the NFL:

The Chargers will release kicker Caleb Sturgis, according to Adam Schefter of ESPN.com (on Twitter). To replace him, the teams plans to promote Michael Badgley from the practice squad.

The move hardly comes as a surprise after Sturgis missed a field goal and two extra points against the Seahawks on Sunday. It was his first game back from a quad injury, but even before that, he missed three field goals and four extra points.

While Sturgis was out, Badgley nailed all three of his field goal tries and went 7-for-7 on extra points, so they have reason to trust the 23-year-old over the veteran. His first assignment as the team’s “full-time” kicker will come on Sunday against the Raiders.

Despite Sturgis’ struggles, the Chargers pulled out a 25-17 win over the Seahawks. Riding a five game win streak, they now stand at 6-2 and have a real chance at catching the Chiefs for the divisional lead.

The Chargers are signing free agent kicker Michael Badgley, league sources tell Field Yates and Adam Schefter of ESPN.com (Twitter link). Badgley will kick while veteran Caleb Sturgis nurses a strained quad. Sturgis, meanwhile, will remain on the team and the club will carry both kickers on the main roster.

Badgley spent time with the Colts this offseason after finishing up his time at the University of Miami. With the Hurricanes, Badgley connected on 794.% of his field goal tries and 96.1% of his extra point attempts. As a senior, he earned first-team All-ACC honors as he made 17-of-23 field goal attempts and 42-of-43 extra point tries for the Hurricanes. Meanwhile, 32 of his 75 kickoffs resulted in touchbacks in 2017.

Badgley’s first test will come against the Browns on Sunday. Depending on Sturgis’ recovery, his audition could last a bit longer. 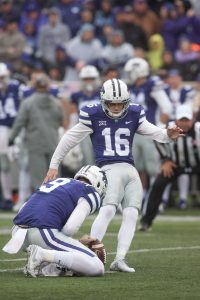 The Colts announced the signing of the following ten undrafted free agents:

Moore, who seemed likely to be taken during Day 3 of the draft, is the biggest name in this group. Moore led his team in tackles in all four of his seasons (interrupted by a medical redshirt year to rehab from a herniated disk in 2016), but evaluators worried about his lack of size and speed. The slim 6’2″ linebacker will now try to catch on as a reserve behind starters John Simon, Antonio Morrison, and Najee Goode.

The Colts seem well set at kicker with Adam Vinatieri under contract for another season, but Badgley will try to give him a run for his money. At The U, Badgley connected on 79.4% of his field goal tries, including a career-long 57-yarder in 2015.

To help make room for the UDFAs, the Colts released a number of players on Tuesday morning, including running back Matt Jones.