On this day in 2015, Panthers defensive end Frank Alexander earned his third and final suspension from the NFL. Now, this shouldn’t be confused for a good thing. Rather, the punishment ultimately spelled the end of the player’s NFL career. 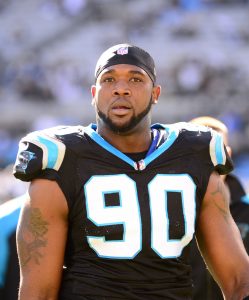 The Panthers used a fourth-round selection (No. 104) on the Oklahoma product during the 2012 draft, and it looked the organization may have found a diamond in the rough. The 6-foot-4, 270-pound lineman looked productive during his rookie campaign, compiling a modest 18 tackles, 2.5 sacks, and three passes defended in 16 games (three starts). While his counting stats took a step back in 2013, Alexander was just as productive on the field. He finished his sophomore season with 15 tackles, one sack, and two passes defended.

While Alexander was still backing up Greg Hardy and Charles Johnson heading into the 2014 season, he was expected to take on a bigger role on the defensive line. However, during the 2014 offseason, he was handed a four-game suspension for violating the NFL’s substance abuse policy. He was slapped with another 10-game suspension before the aforementioned suspension ended, and he ended up appearing in a single game during the 2014 season. Presumably no one would have guessed that that’d end up being his final NFL regular season appearance.

Alexander tore his Achilles during the 2015 preseason, and after being waived/injured by the Panthers, he landed on the team’s injured reserve. Then, three years ago today, the defensive end was slapped with a one-year suspension for his third marijuana violation. He was actually one of three Panthers players to be handed a suspension in a two-game span, as defensive end Wes Horton and wide receiver Stephen Hill were punished the day before.

The Panthers didn’t necessarily miss Alexander during that season, as they ended up reaching the Super Bowl. As for Alexander, he was unable to garner much interest from NFL teams, and he ended up catching on with the BC Lions of Canadian Football League. The 28-year-old still hasn’t appeared in a game with his new organization, and it appears that his professional football career has likely come to an end.

When teams assign first- or second-round tenders to their restricted free agents, or when those RFAs accept the tender, we’ll devote full news stories to those moves. For news concerning everyone else getting the lower tenders, we’ll round it up in the space below, with the latest updates added to the top of the list throughout the day….

Panthers defensive end Frank Alexander has been suspended for the third time in the last two years, and his latest violation will cost him a full 12 months. According to Ian Rapoport of NFL.com (via Twitter), the NFL has suspended Alexander for one year for violating the league’s substance abuse policy again. It’s the second suspension this week for Carolina, as the team also saw DE Wes Horton get hit with a four-game ban.

It’s been a rough couple years for Alexander, who was banned four games last year for his first substance abuse violation, then almost immediately received a 10-game suspension upon returning to the team. While his 2014 season was ruined by those suspensions, his 2015 season came to an early end due to a torn Achilles, which he suffered during the preseason.

Alexander, who played 29 regular season contests for the Panthers from 2012 to 2014, has likely played his last game for the club. The former fourth-round pick will be eligible for restricted free agency this offseason, but considering he’ll be coming off a major injury, has only played one game since 2013, and won’t be reinstated before next November, there’s no real reason for Carolina to want to bring him back.

Panthers defensive end Frank Alexander tore his Achilles during the team’s game against Miami on Saturday, David Newton of ESPN reports (Twitter link). Alexander will miss the 2015 campaign, tweets Joe Person of the Charlotte Observer, joining wide receiver Kelvin Benjamin as the second Panther to suffer a season-ending injury over the last week.

This news comes as Alexander was trying to bounce back from a 2014 season that saw him miss 15 games – 14 on account of two separate substance-abuse suspensions. Alexander’s second suspension last year was for 10 games, which suggested it was his fifth violation of the NFL’s substance-abuse policy.

With last year behind him, the Panthers were hoping Alexander – a 2012 fourth-round pick who has just 3.5 career sacks in 29 games – would earn a roster spot this summer and ultimately help make up for the departure of Greg Hardy.

“Frank’s doing a nice job,” head coach Ron Rivera said in May, Newton wrote . “He’s showing that he’s hungry. He’s got a lot to prove personally. He feels that way and [is] working that way. This is his make-or-break season.”

Following nine years in Baltimore, Haloti Ngata is now adjusting to a 3-4 scheme in Detroit. The veteran understands the learning curve, but the former Ravens standout is excited to start his career with the Lions nonetheless.

“It’s definitely difficult,” Ngata told Dave Birkett of the Detroit Free Press. “You’re going to, when you get fatigued, you get back to your old technique, your old ways of doing things. I saw it on film (Tuesday) — I just kind of seen some of my technique going back to what I used to do in Baltimore. So just knowing that once I’m fatigued, I’ve got to still focus, understand what my technique is, what they want me to do on the defense and try to attack all the time.”

The Titans are 2-13, and looking at a very high draft pick this offseason, but they also have a number of contributors who are set to hit free agency at the end of the year. Paul Kuharsky of ESPN.com takes a look at a 16 players who the Titans will make decisions on, and gives an idea of whether the team will try to keep them.

Notably, he writes that Michael Roos would probably not sign even if the Titans wanted to keep him. With Taylor Lewan taking over at left tackle, Roos would likely find work elsewhere rather than make the transition to right tackle. Jake Locker is another player who isn’t expected to return, although his is a case of the team not being interested.

Kuharsky doesn’t pick out many players the team would have to keep, aside from Derrick Morgan, but most of the list are players who can contribute but are not vital to the operation, much as one would expect from a two-win team.

Here are some other notes from around the league:

49ers‘ running back Frank Gore has seen a decline in his play this season, and his future in San Francisco is in question. Aside from his rookie season and injury-shortened 2010, Gore is on pace to post career lows in yards, attempts, touchdowns, yards per carry, and longest run. He has also been phased out of the passing game, with career lows in targets, catches, and receiving yards.

Gore will be an unrestricted free agent at the end of the year, and spoke to Eric Branch of SFGate.com regarding his future with the team. “If they want to bring me back, they will,” Gore said. “They’ll come to me in a respectful way. We’ll sit down, see what they want me to do. See what my role is and if I like it, I’ll sign. If I don’t, I’ll try to see what other teams think of me.”

Here are Monday’s minor transactions from around the NFL, including practice squad signings and cuts, with the latest moves added to the top of the list throughout the day: