Guard Logan Mankins is retiring, according to Ian Rapoport of NFL.com (on Twitter). The former Patriots great played a total of eleven seasons in the NFL. 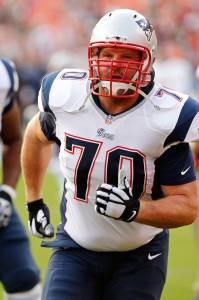 The Buccaneers reportedly have interest in offensive lineman Nate Chandler and over the weekend Greg Auman of the Tampa Bay Times speculated that it was a sign that the team expected Mankins to retire. Mankins pledged to let the team know his decision before the start of free agency and he has done just that today.

Mankins finishes his playing career with a pretty impressive NFL résumé. The former first-round pick, who turns 34 later this week, earned six Pro Bowl berths and played in two Super Bowls. Unfortunately, however, he did not win a Super Bowl. He joined the Patriots the year after they won Super Bowl XXXIX and then was traded to Tampa Bay prior to New England’s 2014 championship season.

Mankins had one year left on his current contract for $7MM though that entire sum was non-guaranteed.

Former Buccaneers head coach Lovie Smith is expected to become the new head coach at the University of Illinois, according to Ryan Baker of CBS Chicago (Twitter link). Bruce Feldman of FOX Sports has also confirmed the likely hire. Smith’s move back to the state of Illinois — where he coached the Bears for nine seasons — has repercussions in Tampa Bay, as Rick Stroud of the Tampa Bay Times reports (Twitter link) that Smith’s contract with the Bucs contained offset language pertaining to any football job, not just those in the NFL. Therefore, Tampa is likely to going to recoup some of the $10MM it owes to Smith under the terms of his old deal.

General managers and head coaches around the league are speaking to the media on Wednesday and Thursday at the scouting combine in Indianapolis, and while most of them will only generally address their pending free agents or other noteworthy contract situations, a handful have revealed some interesting tidbits.

Here are a few updates from the sessions so far:

Two years ago, during Jason Licht‘s first few months as the Buccaneers’ general manager, the team was one of the league’s top spenders in free agency, signing Michael Johnson, Anthony Collins, Alterraun Verner, Josh McCown, and others to big, multiyear contracts. In 2016 though, Licht and the Bucs plan on taking a more cautious approach to free agency, as Rick Stroud of the Tampa Bay Times details. 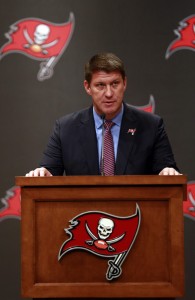 “We’ll be selective and strategic,” Licht said on Thursday. “We don’t want to put ourselves into a position where if you take the wrong guy and give him too much money, it can disrupt your team. I’ve said since Day 1, we are going to build through the draft. And from Day 1, the most success we’ve had is with draft picks.

“We still believe the best way for us to go is to draft and develop players. You can’t think you’re going to put yourself over the top by signing these high-dollar guys.”

According to Stroud, the Buccaneers still intend to get involved in free agency to some extent. However, a deal like Johnson’s two years ago, which was worth $43.75MM in total, including $16MM in guaranteed money, seems unlikely. Johnson, of course, was released by Tampa Bay 12 months after signing that five-year contract.

Here’s more from Stroud on the Bucs:

Veteran Buccaneers guard Logan Mankins admitted after the Buccaneers’ loss to the Panthers on Sunday that he may have played his final NFL game, according to Greg Auman of the Tampa Bay Times. Mankins has yet to make a decision, but confirmed that he’s considering the possibility of calling it a career.

“I don’t know,” Mankins said. “I am at the point in my career where I’m going to take a little time and evaluate what I want to do with my family, with myself and my career and see where it goes.”

Asked if Sunday’s game would be his last as an NFL player, Mankins replied, “It could. It might not be. I don’t know yet. A wise guy always use to tell some of the teams I was on to never make a rushed decision after the season. Take a little time to think about it.”

If he does decide to retire, Mankins will finish his playing career with a pretty impressive NFL résumé. The former first-round pick, who turns 34 this March, earned six Pro Bowl berths and played in two Super Bowls, though he didn’t win one — he joined the Patriots the year after they won Super Bowl XXXIX, and then was traded to Tampa Bay prior to New England’s 2014 championship season.

Mankins has one year left on his current contract, so if he does decide to continue playing, the Buccaneers will have a decision of their own to make. The Fresno State alum is on the books for $7MM in 2016, but that entire amount is non-guaranteed.

The Buccaneers are coming off a 2-14 season, but all eyes will be on Lovie Smith and company over the next weeks, as the 2015 NFL draft nears, since Tampa Bay holds the first overall pick. With most observers, reporters, and fans believing the Bucs will snag Jameis Winston, that pick may be lacking a little intrigue, but speaking to the media today, Smith didn’t fully commit to the Florida State quarterback. Here’s what the Bucs head coach had to say about Winston and a handful of other topics:

Earlier today, we rounded up the noteworthy comments made by a handful of head coaches and general managers who spoke to reporters today in Indianapolis at the NFL’s scouting combine. Wednesday’s press conferences will continue through to about 3:30pm central time, and we’ll keep providing recaps of the highlights from those sessions. Here’s the latest:

There have been a number of NFL trades since the 2014 NFL Draft ended in May, with 13 players and 11 future draft picks switching teams. The Patriots were the most active on the trade market, participating in five deals, while the Buccaneers ultimately made three trades, including a pair with New England.

A couple of the players acquired in these trades had little impact on their new squads. Neither Justin Green or Ben Bass played a snap this season, while T.J. Yates only threw four attempts serving as Matt Ryan‘s backup. Ryan Mallett‘s opportunity as the Texans quarterback only lasted 158 snaps, while Mark Barron Jonathan Casillas, and Akeem Dent primarily served in backup/platoon roles with their new squads.

That leaves six players who played more than 300 snaps following their trade, according to Pro Football Focus (subscription required): Mankins, McClain, Ayers, Harvin, Wright and Burley. So, which of those players ended up having the biggest impact on their new squad?

Mankins led that group with 937 snaps, and his 4.8 rating on PFF ranked him as the third-best offensive player on Tampa Bay (however, he only ranked as the 22nd-best guard in the league). The 32-year-old was still very reliable for the Bucs, starting all 16 games.

Meanwhile, the player he was traded for ended up being a red-zone force for the Patriots. Wright finished the season with 26 catches for 259 yards, a far cry from his 54 catch, 571-yard season in 2013. The 24-year-old did set a career-high in touchdowns, though, catching six. Across the division, the Jets were hoping Harvin could provide a spark to their struggling offense. The wideout compiled 29 catches for 350 yards and a touchdown in eight games for New York. The skill player also added 22 rushes for 110 yards.

McClain had a bounce back season in 2014 following his one-year retirement. The former first-round pick made 13 appearances for the Cowboys, finishing with 81 tackles, two interruptions, a forced fumble and a sack. He also ranked eighth in PFF’s list of the top inside linebackers. The other linebacker on that list, Ayers, filled in adequately for the injured Jerod Mayo. Ayers played in nine games for the Patriots, including four starts, compiling 20 tackles and four sacks.

Finally, Burley managed to carve out some playing time in a very deep Seattle secondary. In 13 games, the 24-year-old compiled 25 tackles and an interception, while also earning a positive rating from PFF. His 1.7 rating was actually higher than teammates Byron Maxwell, although he played about half the snaps.

So, focusing on the six players who had played more than 300 snaps, which player acquired via trade had the biggest impact on their new club? Should one of the omitted players have made the list? Let us know in the comments.

Cardinals defensive tackle Tommy Kelly was cut by the Patriots in late August, but the veteran doesn’t seem to have any hard feelings. In fact, he actually sounds like he’s happier not playing in New England, and the 33-year-old questioned the team’s motivation in an interview with Darren Urban on the Cardinals website:

“I couldn’t take busting my tail every day getting to a game and them taking me out of the game for someone who I know isn’t better than me, because he’s a cheaper option. Are we worried about money here? Or are we worried about winning?”

Kelly isn’t the only player reportedly questioning the Patriots decision-making. Read below to find out who else may have issues with Bill Belichick and company…

The Jets could find themselves in an interesting situation this offseason if they don’t return to their winning ways soon. If general manager John Idzik fires head coach Rex Ryan, one likely candidate he will seek to replace the embattled Jets’ coach could be Seahawks defensive coordinator Dan Quinn, writes Gary Myers of the New York Daily News. Idzik, who came from Seattle’s front office, would look to hire his former colleague Quinn, who is represented by former Jets’ general manager Mike Tannenbaum, whom Idzik took over for two offseasons ago.

Here are some other links from around the AFC East: