The Eagles’ shuffling of their receiving corp continued this morning when they cut Markus Wheaton, the team announced via Twitter. 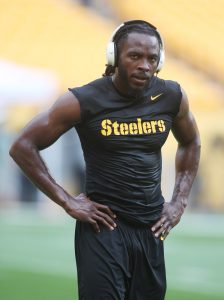 The Eagles just signed Kamar Aiken yesterday, so a move had to be made and the team decided to move on from Wheaton. Wheaton, a sixth-year wideout, was just re-signed himself last week. He played only two snaps in the team’s Week 1 win over the Falcons, but Zach Berman of the Philadelphia Inquirer reports he’ll receive his full salary as he was signed before the Week 1 deadline (Twitter link).

Wheaton signed with the Eagles back in May, was cut September 1st at final cuts, brought back on September 4th just in time for the game, and now released again to make room for Aiken. With Alshon Jeffery still out for likely multiple more weeks, receiver is a major concern for the Eagles. They also recently signed former Texans third round pick Braxton Miller to the practice squad, as well as a pair of other practice squad receivers.

Wheaton showed a lot of promise over a couple of years in Pittsburgh, catching 44 passes for 749 yards and 5 touchdowns in 2015, but never could put it all together. He was a massive free agent bust in Chicago last year, catching only three passes for the Bears all season despite a hefty salary.

On Wednesday, the Eagles announced the signing of veteran wide receiver Markus Wheaton to a one-year deal. The Eagles will also add quarterback Joe Callahan, a source tells Mike Garafolo of NFL.com (on Twitter). 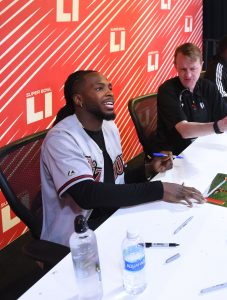 Wheaton signed a two-year, $11MM deal with the Bears last year that included $5MM guaranteed. Unfortunately, he was one of several busts in that Bears free agent class. In March, Chicago cut the former Steelers draft pick.

Wheaton, 27, has registered just 51 receiving yards in each of the last two seasons. However, he had more than 40 receptions for the Steelers in both 2014 and 2015. With the Eagles, he’ll fight to be one of five or six wide receivers out of a group that is currently in the double digits. The WR depth chart is headlined by star Alshon Jeffery as well as Nelson Agholor and free agent addition Mike Wallace. Mack Hollins, Shelton Gibson, Bryce Treggs, and Marquess Wilson are also among those under contract.

Callahan, meanwhile, went unclaimed after being waived by the Packers on Monday. There could be an opportunity for him to stick as the No. 3 QB behind Carson Wentz and Nick Foles and he should see reps in the preseason as Wentz’s availability is expected to be limited.

Before signing Callahan, the Eagles also considered Ohio State product J.T. Barrett, according to Garafolo. Barrett instead chose to sign with the Saints this week.

Former Steelers and Bears wide receiver Markus Wheaton is visiting the Seahawks, Ian Rapoport of NFL.com tweets. The Seahawks are on the lookout for pass catchers after losing tight end Jimmy Graham and wide receiver Paul Richardson in free agency.

Last March, Wheaton inked a two-year contract with the Bears worth$11MM with $5MM guaranteed. That deal turned out to be a bust and Chicago released him earlier this week along with quarterback Mike Glennon and cornerback Marcus Cooper, two other free agent signings from 2017 that did not pan out.

Wheaton, 27, has registered just 51 receiving yards in each of the last two seasons. However, he had more than 40 receptions for the Steelers in both 2014 and 2015.

Wheaton could be a low-risk, high-reward pickup for Seattle, and that’s exactly the kind of signing they need as they are working with limited cap space. At the moment, the Seahawks have Doug Baldwin, Tyler Lockett, and the newly acquired Marcus Johnson as their top three receivers, as shown on Roster Resource. Seattle has also shown interest in Cardinals free agent receiver Jaron Brown.

Chicago is cutting bait with several of their 2017 free agents. The Bears have officially cut wideout Markus Wheaton. We heard earlier today that the receiver was likely to be cut (via Brad Biggs of the Chicago Tribune (on Twitter)). Wheaton was scheduled to carry a $5.75MM cap hit, but the Bears released him with just $750K in dead money.

The Bears have also announced the release of quarterback Mike Glennon and cornerback Marcus Cooper. We heard last month that the organization was going to move on from Glennon, and the veteran has already agreed to a deal with the Cardinals.

After adding Allen Robinson and Taylor Gabriel to the wide receiver stable, the Bears can afford to part with Wheaton, who was part of a failed 2017 free agent class for general manager Ryan Pace. Chicago added Glennon, Cooper, tight end Dion Sims, safety Quintin Demps, and Wheaton last offseason, but none panned out during their first Windy City campaign.

Wheaton, 27, managed only 51 receiving yards for the second consecutive season. Injuries limited him to just 11 games, but he only put up three receptions on the year. In three of his five NFL campaigns, Wheaton has posted six receptions or fewer. Defenders will point to Wheaton’s 40+ catch seasons in 2014 and 2015, but Wheaton hasn’t been productive in some time, and could struggle to find a deal on the open market.

Following a career-year with the Cardinals in 2016, Cooper disappointed this past season in Chicago. The cornerback finished the campaign with 18 tackles and three passes defended in 15 games (four starts).

Injuries have damaged the Bears’ passing game this season, and another key wide receiver looks set to miss extensive time.

Markus Wheaton suffered a groin tear and is expected to miss up to six weeks because of the malady, Adam Jahns of the Chicago Sun-Times reports. However, Wheaton was limited at Thursday’s practice. The fifth-year wideout practicing at all with this injury points to the possibility of a shorter recovery time.

But this is the latest batch of trouble for one of the most depleted receiving corps in the game. The Bears already lost Cameron Meredith to a torn ACL suffered in August, and Kevin White is also on IR because of his latest severe injury. Wheaton has also struggled with ailments over the past year. He missed 13 games during his final Steelers season because of a shoulder injury, and since joining the Bears suffered a finger injury and underwent an appendectomy. The broken pinkie finger sidelined Wheaton for two games this season.

If Wheaton is on the shelf for the time being, the Bears will be down to Kendall Wright, Deonte Thompson and Josh Bellamy as their top wideouts. This scenario played out earlier this season before Wheaton recovered to return. However, since returning, the former Steelers third-rounder hasn’t been effective. He only has one reception for four yards this season.

Although the Eagles dealt Jordan Matthews rather than make him part of their large recent group of extension signees, Howie Roseman said the trade wouldn’t preclude the team from re-signing Matthews as a free agent, Eliot Shorr-Parks tweets. Whether Matthews would consider a return to Philadelphia after this is another story. The Bills wideout is one of many notable receivers entering contract years. He joins fellow Friday traded pass-catcher Sammy Watkins, along with DeAndre Hopkins and fellow 2014 draftees Jarvis Landry, Davante Adams, Allen Robinson, Donte Moncrief as a prospective UFA.

The Bills have a revamped wide receiver corps, having traded Watkins and observed Robert Woods and Marquise Goodwin leave in free agency, so it would stand to reason they’d want to keep Matthews past 2017. But the acquisitions of Matthews and E.J. Gaines may have been secondary to the second- and third-round draft choices received, so Buffalo’s strategy with the newly acquired players will be interesting.

Here’s the latest from around the league as preseason’s first week wraps up.

Let’s take a look the financial details of some recently-signed contracts:

After losing Alshon Jeffery to the Eagles earlier today, the Bears have added a new wideout. Ian Rapoport of NFL.com reports (via Twitter) that Chicago has signed receiver Markus Wheaton.

Wheaton, 26, had spent his entire four-year career with the Steelers. The wideout cotinually progressed after getting selected in the third-round of the 2013 draft, as he finished the 2015 campaign with 44 receptions and career-highs in yards (749) and touchdowns (five). The receiver played in three games (two starts) this past season, collecting four receptions for 51 yards and one touchdown. A shoulder injury ultimately led to him being placed on the injured reserve in late November.

After losing Jeffery today, the Bears are looking at a crop of unproven receivers. Besides Eddie Royal, all of the wideouts are 27 or younger. Cameron Meredith and former first-rounder Kevin White figure to be the starters next season. Wheaton will likely compete with Josh Bellamy, Daniel Braverman, and Bralon Addison for snaps.

We ranked Wheaton as the 10th-best wideout available via free agency.