Days after claiming him from the Vikings, the Bills have waived defensive end Scott Crichton after he failed his physical, Buffalo announced today. 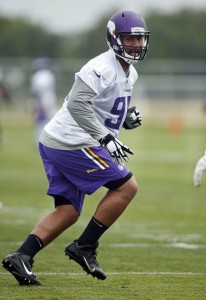 Crichton, 25, has never been able to get his career of the ground after being selected in the third round of the 2014 draft. He’s appeared in 21 games over three seasons, but ended the 2015 season on injured reserve and spent the entirety of the 2016 campaign on IR. As such, it’s perhaps unsurprising Crichton was unable to pass a physical once he arrived in Buffalo.

Crichton has one year left on his rookie contract worth $769K. Any club can now claim Crichton off waivers and assume that salary, but given his health status, Crichton will almost assuredly pass through waivers.

The Vikings announced that defensive lineman Scott Crichton has been waived. Crichton was a 2014 third-round pick and he was widely expected to be a cap casualty this offseason. The Vikings will save approximately $769K against the cap with $164K in dead money.

To date, the 25-year-old defensive lineman (26 in October) has only compiled 10 total tackles in 21 career games. His 2015 season ended on IR and he was waived/injured in the summer prior to the 2016 season. He reverted to Minnesota’s IR after the transaction, but the team is not interested in finding out whether he can return to health and contribute in 2017.

With Crichton out of the picture, the Vikings are left with 64 players on the active roster.

The Vikings had already released center John Sullivan today, and now they’ve announced several other moves that bring them in at the 75-man deadline.

Harris, a former undrafted free agent, served an as offensive tackle during his two seasons with the Chargers. Harris played 12 games at right tackle for the Vikings in 2014, and he started all 16 games at guard this past season. He re-signed with the Vikings on a one-year, $2MM deal.

Here are Saturday’s minor transactions from around the NFL, which we’ll continue to update throughout the day…

Barring an unexpected move, star running back Adrian Peterson will be playing for the Vikings in 2015. His wife, Ashley, told ESPN.com’s Tania Ganguli that she’s happy her husband is back with Minnesota, but that she would have preferred to move closer to her home in Oklahoma.

“I am happy that he’ll be going back,” she said. “They have supported us. I just would personally, for me, I would’ve preferred to be closer to home. That’s just a personal preference for me. The Vikings have been supportive of him and the fans have been pretty supportive, so we’re happy to be going back.”

When asked if her opinion has anything to do with how the organization treated her husband, Ashley gave a vague response:

“Well, the thing is, kind of, but you never know how that would’ve played out with anyone else. Just kind of have to go with the flow on that. I personally would’ve preferred to be closer to my family. I’m having a baby and all that.”

We’re dedicating full posts to first- and second-round picks who sign their rookie contracts, but we’ll be recapping the remaining mid-to-late round signings in posts like this one. Here are the latest draftees to agree to terms with the clubs that selected them earlier in May:

Following one of the worst defensive seasons in team history, the Bears’ scheme under defensive coordinator Mel Tucker will “undergo significant alterations in 2014,” says ESPN’s Michael C. Wright. “There are some significant changes in terms of techniques that we’re going to play; how we’re going to fit the run, some of our alignments,” Tucker said. “We’ll have some alternative fronts that we’ll play. I’m not sure how much of a difference you’ll see during the OTAs and things like that because we’re going to work to lay the foundation on our base principles and techniques, which will allow us to do pretty much anything we want down the road.” Wright also mentions that the team plans to cross train all of the defensive linemen in an effort to achieve better flexibility and versatility.

Although Chip Kelly has had nothing but good things to say about Johnny Manziel publicly, it seems clear that the Eagles never really thought about taking him with the 22nd pick, writes Sheil Kapadia of Philadelphia Magazine. “I love him,” Kelly said. “I think he’s a dynamic quarterback. I also think we have a very, very good quarterback situation – not only with Nick [Foles], but you add Mark Sanchez and Matt Barkley – we think quarterback is a strength for us right now. We felt like the pass-rusher who we had rated higher was the guy we were gonna take.”

Let’s round up a few Wednesday updates from across the AFC….