The Falcons have signed team president and CEO Rich McKay to an extension. The new five-year deal will take him through June 2022. 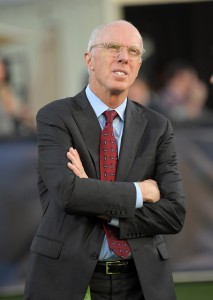 “Rich has been so important to our businesses and Atlanta’s growth for many years. We are thrilled to extend his contract with the Falcons and AMB Sports & Entertainment,” said team executive Steve Cannon in a press release. “He has been instrumental in the success of the Atlanta Falcons on and off the field and has played a very important role in making Mercedes-Benz Stadium a reality, and in bringing Major League Soccer to Atlanta. Rich is a great champion of our core values and will continue to be a strong leader in our organization and community for years to come.”

McKay, who has been with the Falcons since 2004, helped to make the Falcons’ forthcoming new stadium a reality. The exec was initially hired in 2004 as the Falcons’ president and general manager, but he was elevated to his present title in 2011, pushing him more towards the business end of things. The Falcons’ statement highlights McKay’s many achievements, including his role on the league’s competition committee and his work to help renegotiate and extend the current collective bargaining agreement. McKay was suspended from the competition committee in the wake of the team’s artificial crowd noise scandal.

Back in June, we heard that quarterback Jason Campbell was planning to retire from the NFL. However, Campbell hasn’t yet made the decision official, and according to Peter Schrager of FOX Sports (Twitter link), at least three teams have inquired on the veteran free agent. As Joel Corry of CBSSports.com points out (via Twitter), pseudo-retirement ended up benefiting Kyle Orton a year ago, so it’s possible a desperate team will make it worth Campbell’s while to continue his playing career.

Falcons president Rich McKay, who received a suspension from the NFL as part of the team’s penalty for pumping fake crowd noise into the Georgia Dome, is set to meet with commissioner Roger Goodell and league officials about reinstatement to the competition committee, writes D. Orlando Ledbetter of the Atlanta Journal-Constitution. Owner Arthur Blank says he’s “optimistic” McKay will be reinstated.

“We’ve had some discussions with the league,” Blank said. “Rich is scheduled to go up there in a few weeks and meet with the commissioner and others. Rich certainly has my support. He was a very valued member of the committee for 22 years and was mentioned [Saturday] night by Bill Polian, who was an inductee into the Hall of Fame, as somebody who was important that he worked with for a number of years.”

Matt Barrows of The Sacramento Bee has had a look at how Aldon Smith‘s release will impact the 49ers as a whole and a few individual players moving forward. For instance, Barrows writes that the team had been working with $10MM of cap space which, if unused, would roll over to 2016 and would be put toward a player. That player, of course, was Smith. Now, the team will need to decide what to do with its surplus cash. The team could bring in free agent guard Evan Mathis, and players like Vernon Davis, Ian Williams, and Quinton Dial might also be in line to get some of that money.

Barrows also details the emotional and strategic fallout of Smith’s release, and he writes that Corey Lemonier, who looked destined to be cut just a couple of days ago, may be able to hold on to his roster spot.

Now let’s take a look at a few more links from around the league:

After checking in on the AFC East earlier this afternoon, let’s shift our focus to the NFC South and pass along a few items from out of the division….

After announcing the penalties levied against the Browns for their “Textgate” scandal, the NFL has also confirmed the discipline for the Falcons for piping artificial crowd noise into their home stadium. According to Vaughn McClure of ESPN.com (Twitter links), the Falcons have been fined $350K, and will lose a fifth-round pick in 2016.

Per McClure (via Twitter), team president Rich McKay will also be suspended from the league’s competition committee, as Adam Schefter reported earlier today. That ban will begin on April 1, and McKay can’t be reinstated until at least June 30. As for the draft pick, McClure notes that if the team ends up holding multiple fifth-rounders, the higher pick will be taken away.

The Falcons’ former director of event marketing, Roddy White (not to be confused with the wide receiver of the same name), was found responsible for implementing the fake crowd noise at the club’s home games in 2013 and 2014. According to McClure (via Twitter), White will face an eight-week suspension if he gets a job with another team.

The penalty for the Falcons’ rule violations is perhaps a little harsher than the one the Browns received after GM Ray Farmer was found to have sent text messages to the sidelines during games. Cleveland was hit with a $250K fine, and Farmer will have to stay away from the team during the first four weeks of the regular season, but the Browns didn’t lose a draft pick.

10:33am: According to Jeff Schultz of the Atlanta Journal Consitution (via Twitter), the Falcons expect to lose a draft pick for 2016, rather than 2015.

9:55am: An announcement regarding the discipline for rules violations by the Falcons and the Browns is expected to come by Tuesday, according to Adam Schefter of ESPN.com (via Twitter). The NFL has been looking into violations by both teams for several weeks.

The Falcons, who admitted to piping artificial crowd noise in at their home games, are expected to lose a draft pick, sources tell Schefter (Twitter link). While Schefter doesn’t specify which pick Atlanta will lose, I doubt it would be an early-round selection. The NFL will also likely suspend team president Rich McKay from the league’s competition committee, per Schefter.

As for the Browns, general manager Ray Farmer, who reportedly sent text messages to coaches on the team’s sideline during games, figures to be suspended for his role in the “Textgate” scandal. However, the Browns aren’t expected to lose a draft pick, according to Schefter (via Twitter).

Schefter adds that both teams may also receive “hefty fines” for running afoul of NFL rules.

The investigations into the Falcons and Browns are just two of a handful of notable ongoing cases for the league — Peter King of TheMMQB.com noted today that the league still has “a while to go” on tampering allegations made by the Jets and Patriots regarding Darrelle Revis. It doesn’t appear as if the Deflategate investigation, led by Ted Wells, is close to wrapping up either. The NFL is also reportedly looking into potential violations by more than half the teams in the league during this month’s “legal tampering” period prior to free agency.

The Falcons have officially extended the contracts of head coach Mike Smith, general manager Thomas Dimitroff, and president/CEO Rich McKay, the team announced today (link via Jay Adams of AtlantaFalcons.com). Smith and Dimitroff each had one year added to their current deals, while McKay received four new years, extending his contract through May 2019.

“We are fortunate to have talented key leaders at the Falcons who are dedicated to a common goal of being a league leader on and off the field,” owner and chairman Arthur Blank said in a statement. “I have great respect for the skills and commitment of Rich, Thomas and Smitty, and I look forward to continuing to support and work with them in the years to come.”

Smith and Dimitroff have spent six seasons with the Falcons so far, and are coming off a disappointing 4-12 campaign. However, the team still has a 60-36 record during their respective tenures, with 2013 representing the lone sub-.500 season during that six-year stretch.

For Smith, who received a three-year contract extension with one year left on his original deal in February 2011, the one-year extension removes his lame-duck status heading into the 2014 season.