The Eagles’ revamped coaching staff is starting to come together. This week, the Eagles promoted quarterbacks coach Press Taylor by tacking on the title of passing game coordinator, as Tom Pelissero of NFL.com tweets. The club is also set to hire former Broncos offensive coordinator Rich Scangarello for a staff position, Pelissero hears.

It’s not immediately clear what position Scangarello will occupy, or what this all means for the Eagles’ own OC vacancy. Scangarello served as the Broncos’ OC in 2019, but the results were not pretty. After finishing out as the No. 14 team in offensive DVOA in 2018, they regressed to 26th in the NFL. Still, as we’ve seen before, teams aren’t always looking at a coach’s latest results, and Scangarello rolled into Denver with plenty of hype thanks to his previous work in San Francisco.

Taylor, meanwhile, was being considered for the OC position as recently as January 31st. Although he hasn’t been explicitly ruled out for the post, his additional title seems to indicate that he’s no longer in the running for the job. Taylor, 32, has been on the Eagles’ staff since 2013 but has only served as a position coach for the last two years. He is perhaps best known for his role in the Eagles’ legendary “Philly Special” that helped them capture their long-awaited Super Bowl ring.

The Eagles fired Mike Groh just after their early playoff exit, despite previous comments from head coach Doug Pederson indicating that he’d be staying on board. Weeks later, the Eagles are still looking for his replacement.

Mike Shanahan revealed his side of the late-2017 discussions centered around the Broncos bringing him back as head coach. The two-time Super Bowl-winning HC said he was “close” to taking the job, had it been offered.

“I was close. I was close,” Shanahan said, via The Athletic’s Nicki Jhabvala (subscription required). “But one thing that has to happen: You all have to be on the same page. And one thing you have to make sure of when you are a head football coach is the owner, the GM, the quarterback are all on the same page. If it doesn’t happen, the chance of you winning a Super Bowl aren’t very good. 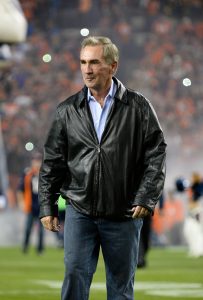 “So, anyway, if that situation had happened, I was going to take it. If not — but anyway, I had a great conversation with John as everybody knows and it didn’t work out. Sometimes it works out for the right reasons.”

John Elway made the initial contact regarding the short-lived reunion, Jhabvala reports, and the Hall of Fame quarterback-turned-GM discussed the job — which then belonged to Vance Joseph — with his former coach. But at the time, Broncos CEO Joe Ellis informed Elway his firing Joseph after one season would have required him to conduct a thorough search — rather than earmark the job for Shanahan. The Broncos would have obviously needed to comply with the Rooney Rule as well.

As for the quarterback component of this, Kirk Cousins may or may not have been part of the equation. Conflicting reports emerged on then-free agency-bound passer following Shanahan to Denver. But the Shanahan process did not progress too far, and the Broncos made other plans. They retained Joseph for the 2018 season and signed the player Cousins wound up replacing in Minnesota, Case Keenum. They are now on another HC-QB combo in Vic Fangio and Joe Flacco.

Shanahan’s greatest coaching moments came in Denver. He helped the Broncos to two Super Bowl titles and four playoff byes. His Raiders and Redskins tenures did not go as well. The 66-year-old coach has not ruled out a return to the sidelines.

“You always miss coaching,” Shanahan said. “But it’s been five years. I made the decision a long time ago, right when I got fired. I said if I didn’t get the right job right away where we had a chance to win a Super Bowl that I was probably going to do what I’m doing, which is kind of being a dad and following (my) son and the organization and being a part of it.”

Elway did enlist Mike Shanahan’s help while securing a deal with new OC Rich Scangarello, who worked for Kyle Shanahan for two seasons. Scangarello’s offense will look somewhat similar to what the Broncos primarily ran under the elder Shanahan.

Possessing the size, strength and speed of a prototypical outside receiver, Harry could be an option for Arizona should he still be on the board when the team is on the clock at No. 33. Harry should fully be in play there, as the Cardinals reportedly like the value of going receiver with their second-round pick, Bleacher Report’s Matt Miller tweets.

Should the team go with Harry, it would pair him with another local standout in Christian Kirk, who impressed as a rookie before missing time with an injury down the stretch. The pair of young wideouts would join veteran and future Hall of Famer Larry Fitzgerald in a potentially loaded receiver corps for either Josh Rosen or Kyler Murray, should the team go with the Oklahoma product as expected a week before the draft.

Here’s more draft talk from around the league:

The draft board seems a little uncertain right now, but quarterbacks tend to drift up from the bottom of the first round to the Top 10 as the big day draws near. This year, teams like the Giants (No. 6 overall pick), Jaguars (No. 7), Broncos (No. 10) and Dolphins (No. 13), and Redskins (No. 15) could all be candidates to move up the board to get their next signal caller.

Here’s more out of SF:

Scangarello had a strong first interview with Vic Fangio & Co. earlier this week and he’ll be back in the building for Round 2 on Wednesday. Scangarello has just four years of NFL assistant coaching experience, but he wowed Denver brass nonetheless, and the 49ers’ initial reluctance to let him interview with the Broncos shows how much he is valued.

In 2018, the Broncos finished 19th in total offense with 350.1 yards per game. Scangarello, or whoever the hire is, will be expected to draw them closer to the Top 10.

As shown in PFR’s Offensive Coordinator Tracker, Scangarello is the only known candidate at this time. Mike Munchak was thought to be in the mix after Gary Kubiak bailed, but he has since signed on to be the Broncos’ new offensive line coach.

The Broncos’ interview with Rich Scangarello is back on. After being rebuffed initially, the 49ers have reversed course to allow the Broncos to talk with their quarterbacks coach (via Mike Klis of 9News).

With that, the Broncos and Scangarello will discuss Denver’s offensive coordinator vacancy on Monday afternoon. The 46-year-old is one of a few known candidates for the job that was accepted, then rejected, by Gary Kubiak last week.

Scangarello has just four years of NFL assistant coaching experience, but he did spent four years as a college OC between Northern Arizona and Wagner. Scangarello patterned his passing game after Kyle Shanahan, which is why he accepted a low-paying assistant job to join his Falcons staff in 2015 and followed him to San Francisco.

As shown in PFR’s Offensive Coordinator Tracker, Scangarello is the first known candidate to interview for the job since the Kubiak hire went bust.

The Broncos continue to search for a new offensive coordinator, but it sounds like a front-runner has yet to emerge.

For starters, three candidates have already been connected to the opening: former head coach Gary Kubiak, 49ers quarterbacks coach Rich Scangarello, and Steelers offensive line coach Mike Munchak. There was some optimism that the organization would hire Kubiak, but the two sides ultimately decided to go in different directions. The Broncos were denied their request to interview Scangarello, but Troy Renck of Denver7 (via Twitter) notes that the team is still pushing to interview the San Francisco quarterbacks coach.

When it comes to Munchak, it sounds like the long-time coach may not even be a candidate for the offensive coordinator opening. Renck says the Broncos are hoping to hire the 58-year-old as their offensive line coach, a position Munchak has held with the Steelers since 2014. Munchak’s contract with the Steelers has (or will soon) expire, so the Steelers wouldn’t truly have the means to block him from taking a different gig. We learned yesterday that Munchak was set to meet with the organization.

Ultimately, the final decision will come down to new head coach Vic Fangio. Nicki Jhabvala of The Athletic tweets that “the hire will be completely Vic Fangio’s call.”