Lacking a first-round pick for the fifth straight draft, the Rams opted to add to one of their strongest position groups with their second-round choice. They selected Louisville receiver Tutu Atwell 57th overall. 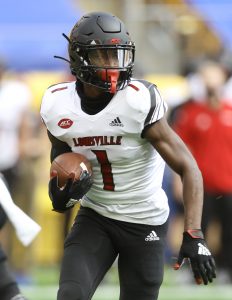 The diminutive wideout agreed to terms on his four-year rookie contract Friday, Adam Schefter of ESPN.com tweets. Atwell will join a Rams receiving corps that houses Robert Woods, Cooper Kupp and DeSean Jackson. The team also drafted Van Jefferson in the 2020 second round. It has invested considerable capital at this position.

Los Angeles’ pick surprised also because of Atwell’s stature. The 5-foot-8 target checked in at 149 pounds earlier this offseason. He will be one of the smallest players to suit up for an NFL game in generations. Atwell’s size did not prevent him from becoming one of this draft’s top receivers available, however. He caught 69 passes for 1,272 yards and 11 touchdowns as a sophomore in 2019 and added a 46/625/7 line in 2020’s abbreviated season.

The Rams traded two first-round picks and change for Matthew Stafford earlier this year. Jackson and Atwell stand as players who could maximize the longtime Lion’s arm strength. They will pair with intermediate targets Woods and Kupp. Atwell, Woods, Kupp and Jefferson are signed through at least 2023, with the rookie’s deal running through 2024.