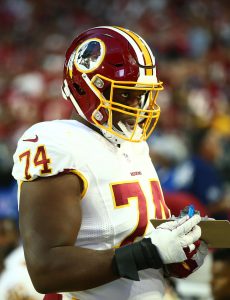 The Redskins have waived/injured guard Arie Kouandjio. To take his place on the roster, they have signed fellow guard Isaiah Williams.

This was the expected move after it was learned that Kouandjio would miss the entire 2018 season with a torn quadriceps muscle. If Kouandjio goes unclaimed on waivers – which is the likely outcome – he will land on the Redskins’ injured reserve list. From there, the Redskins can either keep him on IR or negotiate a settlement for his release.

Before the injury, Kouandjio was said to be performing well on the practice field and figured to be a staple in the rotation on the interior line. Without him, Shawn Lauvao appears to be a shoe-in to start at left guard with standout Brandon Scherff manning right guard.

The former fourth-round pick out of Alabama appeared in 17 games with Washington over the last three years and started in the final six games of last season.

Williams is no stranger to Washington. He entered the league with the Redskins as an undrafted free agent in 2016 and spent the year on their practice squad. Since then, he has spent time with the Chiefs and Colts.

Redskins guard Arie Kouandjio will miss the entire 2018 season, multiple sources tell John Keim of ESPN.com (on Twitter). Kouandjio recently went under the knife to repair a torn quadriceps muscle, but he will take longer than expected to recover. 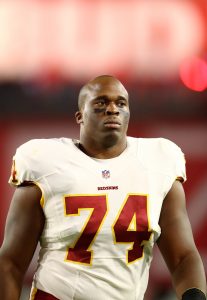 Doctors tell the Redskins that Kouandjio will be out of action for six-to-eight months. That timeline should allow him to return in full health for 2019, but he won’t be able to partake in football activities for a while.

This marks a disappointing development for the Redskins as they were high on his offseason work up until this setback. Without Kouandjio, the Redskins will likely use the recently re-signing Shawn Lauvao as their starting left guard with Brandon Scherff mirroring him on the right.

The 2015 fourth-round pick out of Alabama has appeared in 17 games with Washington. Injuries decimated the Washington offensive line in 2017, resulting in three of its five Week 1 starters — Trent Williams, Spencer Long and Lauvao — missing at least six games. Kouandjio filled in as a starter in six of his eight games that season.

Josh McDaniels said recently his role remains the same, despite Robert Kraft and Bill Belichick helping to convince him to stay and thus spurn the Colts. But the longtime Patriots offensive coordinator’s presence in what’s generally a “notoriously small” draft room was indeed an expansion of McDaniels’ responsibilities, Albert Breer of SI.com notes. Although many teams may have written McDaniels off after his controversial flip-flop, he was a perennial fixture in HC carousels leading up to his 11th-hour decision to back out of a Colts deal. But the 42-year-old assistant insists he still wants to be a head coach, and taking part in draft-day proceedings would stand to further bolster those hopes.

Here’s the latest from the Easts:

One of the candidates to work as the Redskins‘ starting left guard may not be able to factor into that competition. Arie Kouandjio is believed to have suffered a torn quadriceps muscle, JP Finlay of NBC Sports Washington reports. Kouandjio’s season is now in jeopardy, per Finlay, who notes this injury could sideline him for the rest of 2018. Despite not making the Redskins’ 53-man roster out of camp, Kouandjio started the final six games for Washington at guard after the Redskins signed him off the Ravens’ practice squad. The 2015 Washington fourth-round pick made two starts in 2016 as well. Washington re-signed Shawn Lauvao, and Finlay notes it’s uncertain if Kouandjio suffered this significant malady before or after that agreement occurred. The 30-year-old Lauvao’s been the Redskins’ primary left guard since the 2014 season. The team also drafted Louisville tackle Geron Christian and still has Ty Nsekhe in the backup mix.

Here’s the latest from the East divisions:

Orlando Franklin‘s Washington workout will produce a signing, with Adam Schefter of ESPN.com reporting (via Twitter) the UFA offensive lineman agreed to terms with the Redskins. 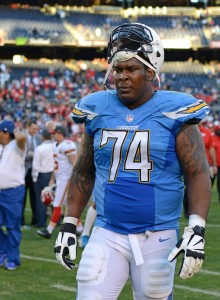 Franklin, 29, has not played this season after the Saints released him in August but auditioned for the Redskins earlier this week. He started for six seasons leading up to this one, however, lining up as a right tackle for three years and a left guard for the previous three.

Center Spencer Long and tackle Ty Nsekhe are out for Sunday’s game against the Cowboys. Trent Williams, Morgan Moses and Brandon Scherff are listed as questionable.

The brother of Cyrus Kouandjio, Arie Kouandjio spent two seasons with Washington after the franchise selected the Alabama blocker in the fourth round of the 2015 draft. He started two games at left guard for the 2016 Redskins but could not make this year’s roster. The Ravens signed the older of the two NFL Kouandjios in September and stashed him on their practice squad.

The Chargers cut Franklin after two seasons earlier this year, doing so after signing him to five-year deal in March 2015.

The Ravens have added two offensive linemen to the 53-man roster. Center/guard Matt Skura was internally promoted from the practice squad while offensive tackle Dieugot Joseph was signed off of the Bears’ practice squad. They’ll fill the roster spots vacated by guard Marshal Yanda (ankle) and inside linebacker Bam Bradley (ACL) now that they’re on IR and done for the season. 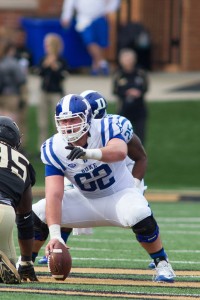 Skura started in all four preseason games for the Ravens over the summer. The Duke product first joined the Ravens in May of 2016 but has yet to get his first taste of NFL action. Joseph, meanwhile, is an undrafted rookie out of Florida International.

In related news, the Ravens also re-signed running back Jeremy Langford to practice squad, along with guard Arie Kouandjio and linebacker Nicholas Grigsby. Langford was promoted to Baltimore’s 53-man roster after Danny Woodhead was placed on IR, but he was released late last week to make room for the promotion of tailback Alex Collins. Kouandjio, a former standout at Maryland high school powerhouse DeMatha, was a fourth round pick of the Redskins in 2015. This marks his first employment since missing Washington’s 53-man cut in early September.

Matt Miller of Bleacher Report reported yesterday that while there are NFL teams interested in drafting Dorial Green-Beckham in the first round on Thursday, ownership has squashed those plans. In fact, a source from one team drafting in the top 15 tells Miller that ownership responded with a flat-out “no” when the topic of DGB in the first round was broached.

Miller has many more items in his latest piece at Bleacher Report, so let’s dive in and check out the highlights….