The story of Colt Lyerla took a sad turn today as the former Oregon standout was arrested for heroin possession, as Tim Brown of The Oregonian writes. 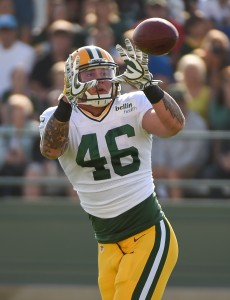 As a true freshman for Chip Kelly‘s Oregon Ducks in 2011, the tight end caught seven passes for 147 yards and 5 touchdowns. In 2013, Lyerla was getting into trouble off the field and ultimately quit the program. Soon after, he was arrested and later pleaded guilty to cocaine possession. After going undrafted, Lyerla signed on with the Packers but suffered a season-ending knee injury prior to the 2014 season. Lyerla’s agent said that the Packers indicated he would still be in the team’s plans, but they never circled back to him for one reason or another.

A federal judge has approved a plan to resolve thousands of NFL concussion lawsuits that could cost the league $1 billion over 65 years, Maryclaire Dale of The Associated Press writes. The awards could reach $1MM to $5MM for those diagnosed in their 30s and 40s with Parkinson’s disease or Lou Gehrig’s disease, or for deaths involving chronic brain trauma. NFL actuaries estimate 6,000 of nearly 20,000 retired players to someday suffer from Alzheimer’s disease or moderate dementia. The settlement between the two sides ends a four-year legal battle. Here’s more from around the league..

Roster construction is a collaborative effort in Detroit, but head coach Jim Caldwell acknowledges that general manager Martin Mayhew will have the final say on the 53 players the Lions carry into the regular season, as he tells Justin Rogers of MLive.com. If Caldwell were making the final decisions, he’d like favor production over potential, for one obvious reason.

“I’m in the business of winning games and winning games now,” Caldwell said. “So the most important thing to me is getting guys who can be in a position to help us win right now. There are other, businesses (and) positions within the organization that may look at it differently, but we have to look at it as coaches. We’re looking for the best guy to help us win, at this particular moment in time, and that’s what counts for us.”

Bears second-year receiver Marquess Wilson will be sidelined indefinitely after he suffered a fractured clavicle on Monday. A second-year pro, Wilson had the inside track on the Bears’ No. 3 receiver job prior to going down. Josh Bellamy was listed behind Wilson on the Bears’ unofficial preseason depth chart, but the team is expected to sign another receiver in Wilson’s absence.

Packers cornerback Tramon Williams was a Pro Bowler in 2010, but a shoulder injury in the 2011 season opener limited his effectiveness for two seasons (despite starting 31 games). The 31-year-old seemed to regain his form last season, however, writes ESPN Wisconsin’s Jason Wilde, who quoted cornerbacks coach Joe Whitt: “Really, the last nine games – [Williams] played as good as everybody talked about 2010. From the New York game on, if you’re looking for much better play than that, you’re not going to get it from anybody in the league. Now, can we get it for 16 games and onto the playoffs and next year? I’m a firm believer if he’s healthy, we’re going to get it.”

Now that OTAs and minicamps are behind us, writers from around the league are looking ahead to training camp, anticipating roster battles, and wondering if anything we saw in the past few weeks of workouts will translate into the regular season. Here are some such notes from the NFC:

In an exhaustive Q&A with Packers All-Pro quarterback Aaron Rodgers, Jason Wilde of ESPNWisconsin.com delves into the psyche of the former Cal standout and 10-year vet, with questions ranging from dealing with public scrutiny to his relationship with coach Mike McCarthy.

Wilde also touches on the length of Rodgers’ career, which has been a topic of discussion after the quarterback hinted at how many years he has left in a tweet on the nine-year anniversary of his drafting. Here’s Rodgers’ response when asked if he has changed his timeline:

I think the way I’ve been feeling the last two years, with changing some things off the field in the offseason with my eating patterns, my body’s been feeling really good. To the point of, I feel like I can really keep my legs underneath me for a long time and as long as I have my legs, I feel like I can play the position the way I want to play it. I’d love to be able to play this contract out and then do a few more [years]. I think that’d be a lot of fun. This is a great place to play and live and work, and this is what we do. This is what I’m talented at more than anything else in my life, and I want to keep doing it.

Veteran wide receiver Jerome Simpson was surprised that he had to take a pay cut from the Vikings, write Chris Tomasson and Brian Murphy of the Pioneer Press. Simpson set a career high last season for receiving yards and was two catches shy of his best season ever in that category, but a DUI hurt his leverage. Ultimately, he saw his salary chopped from $2.1MM in 2013 to $1MM in 2014.

“I can’t lie. I was definitely surprised that I get paid less than what I got last year,” Simpson said. “I had my best numbers. But I guess when you got that negative thing on you, they kind of got you behind the eight-ball.“

Here are several more Thursday links from around the NFC:

Pro Football Weekly’s 2011 scouting report of draft prospect Nick Fairley included notes such as “has underachiever tendencies” and “needs to be pushed and is not a self-starter.” Three years after the Lions drafted him 13th overall, motivation is still an issue for Fairley, who is entering the final season of his rookie contract because the team declined his fifth-year option. Why? “The Lions had grown weary of Fairley’s fluctuating weight and inconsistent play and saw this as a last chance to motivate their talented defensive tackle who’s shown far too few flashes of brilliance on the field,” according to the Detroit Free Press’ Dave Birkett. In response, Fairly has trimmed down approximately 25 pounds in an effort to have a strong season and increase his value on the open market.

Here’s some more news and notes from around the NFC North division, starting with another prominent defensive tackle: