Titans tight end Craig Stevens is calling it a career. After eight NFL seasons, Stevens is walking away from the game, a source tells Alex Marvez of the Sporting News. 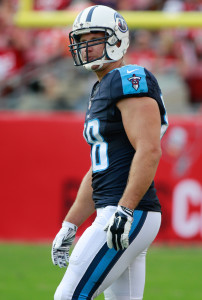 Stevens, 32 in September, appeared in all 16 games for the Titans last season. He caught 12 passes for 121 and 2 touchdowns. The pair of scores matched a previous career high set in 2010. Stevens, a blocking specialist, has been a member of the Titans since being selected in the third round of the 2008 draft. With eight straight years in Tennessee, he was one of the longest tenured members of the Titans.

Stevens leaves the game with 60 receptions for 724 yards and six touchdowns in his career.

FRIDAY, 1:27pm: Stevens’ new deal with the Titans is a one-year pact worth $2MM, with incentives that could take it up to $2.6MM, tweets Ian Rapoport of NFL.com.

THURSDAY, 8:14pm: The Titans announced that they have re-signed tight end Craig Stevens. “We’re glad to have him back,” GM Jon Robinson said in a statement.

Stevens, 32 in September, appeared in all 16 games for the Titans last season. He caught 12 passes for 121 and 2 touchdowns. The pair of scores matched a previous career high set in 2010. Stevens, a blocking specialist, has been a member of the Titans since being selected in the third round of the 2008 draft. With eight straight years in Tennessee, he is one of the longest tenured members of the Titans.

Stevens has 60 receptions for 724 yards and six touchdowns in his career.

The Titans and tight end Craig Stevens agreed to a restructured contract on Wednesday, sources familiar with the situation tell Jim Wyatt of The Tennessean. Stevens was previously scheduled to earn $3.5MM in 2015. Now, he’ll instead earn a similar amount to his deal from last season when he made $1.6MM.

The 2008 draft pick suffered a thigh injury last season and was placed on injured reserve after five games. Across the last five seasons, Stevens has hauled in 48 catches for 603 yards and four touchdowns. With his new deal, Stevens will remain with the Titans where he’s a part of a deep tight end stable. Besides Stevens, Tennessee has Delanie Walker and Anthony Fasano on its roster, along with Taylor Thompson and Dorin Dickerson.

Ravens wideout Steve Smith will be facing off against the Patriots this weekend, and the veteran acknowledged that he was pursued by New England during the offseason.

“Yeah, I talked to [Bill Belichick] and it was a great opportunity as well,” Smith told Aaron Wilson of The Baltimore Sun. “Anytime you have an opportunity to go to some teams, it’s always good. When your phone stops ringing, you need to start thinking about if I’m in the right profession.”

Here are Saturday’s minor transactions from around the NFL, with recent updates added to the top of the list:

Before Jay Gruden signed on to coach the Redskins, he had a very positive interview with the Titans, writes Jim Wyatt of The Tennessean. “It was a good visit,” Gruden said. “I was very interested in the job, but Washington called me I guess the night after the interview and had me fly up here and they offered me the job right away.” Gruden says he was never offered the Tennessee job and soon after, the Titans hired Ken Whisenhunt as their head coach.

Here’s more from out of the league’s two South divisions:

Titans edge defender Kamerion Wimbley agreed earlier this week to restructure his contract, and Jason Fitzgerald of OverTheCap.com has the breakdown of what Wimbley’s new deal looks like. However, as Fitzgerald details, Wimbley wasn’t the only Titan to rework his contract this week. Tight end Craig Stevens also has a new 2014 cap figure, reducing his overall base salary by $1.7MM in exchange for a $500K guarantee. While Stevens’ 2015 salary remains unchanged, his ’14 cap number is now only about $2.69MM.