The Colts pulled off a rare blockbuster trade this offseason, shipping out their first-round pick in exchange for All-Pro defensive tackle DeForest Buckner. Now, we have more details on exactly how that deal came to be. It all happened quickly, as the deal came together in less than a week, sources told Jason La Canfora of CBS Sports. Buckner’s agent met with 49ers brass back at the combine, where they made it clear the big man was looking for at least $20MM annually on a contract extension. San Francisco apparently decided right then and there that they weren’t going to be able to pay that, and needed to look for a trade.

La Canfora reports that a handful of teams were in the mix, but Colts GM Chris Ballard was the most aggressive in his pursuit. Ballard was willing to talk contract details immediately, and of course the defensive tackle ended up getting a new pact worth more than $21MM annually. La Canfora also notes that Indiana’s low three percent income tax played a role in Buckner’s eagerness to join Indy. The Colts have had one of the best defenses in the league this season, in large part due to Buckner’s continued elite play.

After months of rumors indicating the 49ers’ priority hierarchy placed George Kittle and DeForest Buckner extensions atop the franchise’s agenda, Buckner is now a Colt and Arik Armstead has a long-term 49ers contract. Buckner’s 11th-hour negotiations with the 49ers appear to have been a fork-in-the-road moment for the franchise. 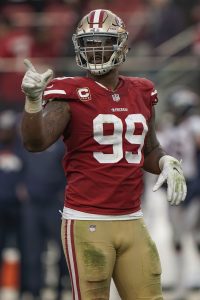 The 49ers began talking an extension with their standout defensive tackle last year, only to table a Buckner deal until 2020. However, after those discussions produced a price the 49ers deemed too high, the team began holding trade talks at the Combine, Matt Barrows of The Athletic notes (subscription required).

Buckner’s agent and the 49ers engaged in discussions at the Combine as well, per Barrows. That may have been a last-ditch effort, based on what happened next. The sides were far apart on extension value as far back as May 2019. Two weeks after the 49ers searched for trade partners, the Combine’s host team came in with a successful offer.

The Colts valued Buckner immensely, authorizing a $21MM-per-year deal. That price is just $1.5MM off Aaron Donald‘s AAV and worth more than any edge rusher not named Khalil Mack. The 49ers then signed Armstead to a five-year, $85MM deal. While saving $4MM per year by pivoting to an Armstead re-up over a Buckner deal, the 49ers will also gamble on the former’s contract year compared to the latter’s superior body of work. Of course, San Francisco also holds the No. 13 overall pick now and still employs four former first-round picks along its defensive line.

The 49ers have agreed to trade All-Pro defensive tackle DeForest Buckner to the Colts, as Adam Schefter of ESPN.com tweets. In this stunner of a deal, the Colts will send their first-round pick (No. 13 overall) to San Francisco and sign Buckner to a newly-minted monster contract. 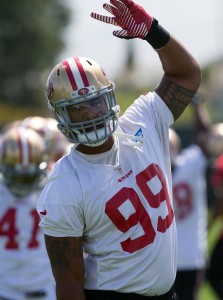 Buckner’s new pact will pay him $21MM per year and make him the second-highest paid DT in league history. Now, only Aaron Donald ranks higher on the all-time list at the position.

The deal leaves the Niners with a major hole to fill on their world-class defensive front. The deal also gives them additional draft artillery. The 49ers now own two first-round picks (Nos. 13 and 31 overall), which they could quickly parlay into a larger stockpile. As of this writing, they have no picks in Rounds 2, 3, or 4. One of those first-rounders will now likely be traded for better depth in April, Schefter tweets.

Just hours ago, the 49ers struck a deal to keep defensive lineman Arik Armstead in the fold for the long-haul. His five-year deal, potentially worth $85MM, seemed to signal that the Niners would be keeping the band together. Instead, it was one half of a difficult choice the 49ers felt they had to make. With the trade, the Niners will be able to apply their limited cash to other areas and replenish with younger talent in the draft.

The former No. 7 overall pick was exceptional in 2019 and was awarded an All-Pro selection for his performance. The Oregon product tallied 62 tackles, nine for a loss, and 7.5 sacks last year as the 49ers rumbled their way to the Super Bowl. With 28.5 career sacks, he has a proven track record of getting to the quarterback and changing the complexion of any game.

The Colts, meanwhile, entered the offseason with adding pass-rush help high on their to-do list. They were particularly soft on the interior; so the upgrade that Buckner provides cannot be understated.

Meanwhile, on the other side of the ball, things seem to be heating up with Philip Rivers. The Colts just might start free agency with the acquisition of two superstars to address their two biggest areas of need.

Prior to the Patriots sending Jimmy Garoppolo to the 49ers for merely a second-round pick, rumblings of a Kyle Shanahan–Kirk Cousins reunion occurred. Shanahan admitted Cousins was in the 49ers’ pre-Garoppolo plans. Although Garoppolo just quarterbacked the 49ers to Super Bowl LIV, the prospect of the 49ers jettisoning Garoppolo and signing Cousins in 2021 has popped up on some radars around the league, Albert Breer of SI.com notes. Cousins’ fully guaranteed Vikings contract expires at season’s end, and Garoppolo’s 49ers-friendly deal contains no more guaranteed money.

Cousins played under Shanahan with the Redskins from 2012-13, though Robert Griffin III was Washington’s starter for most of that span. Cousins will turn 32 this year, and the cap-strapped Vikings are expected to explore an extension for their third-year starter soon. If no deal gets done by Week 1, the throwback Cousins-to-San Francisco plotline may gain steam.

Here is the latest from the NFC West, moving first to the defensive side of the 49ers’ depth chart:

DeForest Buckner is set to hit free agency following the 2020 season, and the 49ers are apparently motivated to sign him to a long-term deal. Jason La Canfora of CBSSports.com writes that the organization is “pushing to try to make” an extension a “reality.”

The 2016 first-round pick has emerged as one of the 49ers top players, as he’s collected 19.5 sacks over the past two seasons. He got a Pro Bowl nod following his breakout 2018 campaign, and he earned first-team All-Pro recognition following the 2019 season.

Last April, the organization exercised the fifth-year option on the defensive tackle. He’ll earn a $14.36MM base salary in 2020 before hitting free agency next spring.

While the 49ers may be working on an extension for Buckner, the front office will also have to switch focus to their current free agents. Earlier today, wideout Emmanuel Sanders revealed that his camp hasn’t had any discussions with the 49ers regarding a new contract (Twitter link).

Cowboys running back Ezekiel Elliott is definitely considering a holdout, though Yahoo’s Charles Robinson reports that Elliott has not yet made up his mind one way or another. However, Robinson acknowledged earlier today (via Twitter) that the situation could go sideways fast. He writes that the club has discussed an extension for Elliott for a month or so, but those talks have not progressed in any meaningful way, so Elliott is now exploring his options.

Critically, Robinson notes that Elliott must report to training camp by August 6 in order to get a fourth accrued season towards free agency and preserve his right to hold out next summer if he so chooses. That reality gives Dallas a little more leverage, but Robinson also reports that the two sides are still working towards an agreement and that Elliott’s toying with the idea of a holdout has not yet strained the relationship between player and team.

Elliott and his camp will take this week to assess his options. If Elliott agrees to report on time, perhaps the team will assure him that it will prioritize an extension for him before the regular season. To date, a new deal for Elliott has not been on the top of Dallas’ to-do list.

We rounded up some NFC notes earlier today, and now we’ll dive into more items from the National Football Conference: