While Week 6’s Thursday night game features two NFC South teams squaring off, we’ll head over to the AFC, and round up the latest news, rumors, and other items out of the AFC South division. Let’s dive in….

3:50pm: The Texans have made another cut, waiving punter Will Johnson, according to Aaron Wilson of the Houston Chronicle (via Twitter).

1:34pm: The Texans’ cutdown to 75 players is underway, with Mark Berman of FOX 26 Houston reporting, in a series of Twitter links, that the team has removed 10 players from its roster, cutting nine and moving linebacker Reshard Cliett to the injured reserve list. Cliett, a sixth-round pick, went down several weeks ago with a knee injury, and will be sidelined for his rookie season.

Per Berman, here are the nine players cut by the Texans today:

By my count, the Texans are now carrying 80 active players, following their acquisition of tackle Chris Clark, so they’ll have to make a few more moves by Tuesday afternoon’s 75-man deadline.

DECEMBER 10: The Texans have finally placed Clowney on IR officially, promoting outside linebacker Jason Ankrah to take his spot on the roster, tweets Mark Berman of FOX 26 Houston.

DECEMBER 4: Texans coach Bill O’Brien told reporters, including Mark Berman of FOX 26 (via Twitter) that No. 1 overall pick Jadeveon Clowney is going on injured reserve. Clowney will have to undergo surgery on his right knee, ending his 2014 season.

“This guy’s been injured, and it’s time to clean it up and get him back to feeling good,” O’Brien said (via Tania Ganguli of ESPN.com on Twitter). 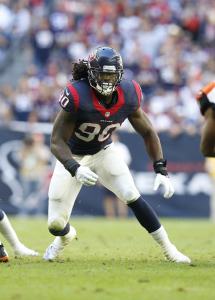 Indeed, it has been a trying season for Clowney, who has been struggling with his knee all year long. O’Brien made it clear that playing on the injury did not aggravate it any further, according to Ganguli (via Twitter). In just four games this season, Clowney amassed a grand total of seven tackles and zero sacks.

One can only wonder how this season might have turned out for Houston if they had a healthy Clowney in the lineup. J.J. Watt, who is in the midst of another stellar season, could have been even more menacing for opposing teams with extra attention being placed on the former South Carolina superstar. Despite Watt’s tremendous season, the Texans have struggled in all facets of the game and currently sit at 6-6, putting them two games behind the division leading Colts. According to Football Outsiders, the Texans currently have a 3.7% chance of winning the division and a 3.1% chance of securing a Wild Card spot.

Looking beyond this season, the Texans will be keeping their fingers crossed for Clowney to make a fast turnaround and recover well over the offseason. Widely regarded as the safest top choice in the 2014 draft, his knee injury casts doubt as to whether he’ll be able to live up to his skyhigh expectations.

3:22pm: The Texans have confirmed the moves noted below in a press release, adding that fullback Toben Opurum has been cut to clear space on the practice squad for Ankrah.

8:36am: Ricky Sapp will be placed on injured reserve to make room on the Texans’ roster for Simon, according to Jayson Braddock, who reports (via Twitter) that the team is also signing outside linebacker Jason Ankrah to the practice squad.

8:13am: The Texans are set to snatch a player off the Ravens’ practice squad, according to Aaron Wilson of the Baltimore Sun, who reports (via Twitter) that Houston will sign outside linebacker John Simon to its 53-man roster. As Wilson observes (via Twitter), the move reunites Simon with Texans linebackers coach Mike Vrabel, after the two spent time together at Ohio State.

Simon, 24, was selected in the fourth round of the 2013 draft by the Ravens, and spent some time on the club’s active roster last season, contributing primarily on special teams. After failing to earn a spot on the 53-man roster this year, Simon re-signed to Baltimore’s practice squad, and had some incentive to do so — his $10K weekly salary was more than most taxi squad players earn, though he’ll still be in line for a nice raise now that he’s making the move to an active roster.

The Texans don’t currently have an opening on their 53-man roster, so a player will have to be cut or placed on injured reserve in order to clear room to officially sign Simon.

We’ve devoted one Tuesday post to the practice squad shuffling being done by teams today, but many clubs around the league are also tweaking their 53-man rosters. We’ll round up a handful of those transactions right here, with new moves added to the top of the list throughout the day:

The Texans took their time in announcing their rookie free agent signings, but the team has officially done so today, revealing the names of their UDFA additions in a press release. Here’s the complete list: