Here’s today’s look at the minor signings and cuts around the NFL:

The Lions have signed former Falcons tackle Lamar Holmes to a contract, according to Tim Twentyman of DetroitLions.com. Atlanta cut Holmes from its roster with an injury settlement back in December, so he had been eligible to sign with a new team before 2016 free agency begins next month. 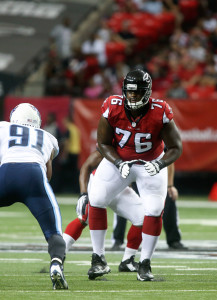 Holmes, 26, started 19 games at left and right tackle for the Falcons during his time with the team, including 15 games in 2013. A third-round pick in 2012, Holmes has been slowed by injuries since entering the NFL. He would have spent the entire 2015 campaign on Atlanta’s PUP list had the team not waived him in December.

If the Falcons had kept Holmes on their roster, his contract would have tolled, meaning his rookie deal would have extended for another year, keeping him under contract through the 2016 season. Instead, Atlanta opted to cut him, allowing him to reach the open market. Holmes took advantage of that opportunity by working out for a handful of teams over the last couple months, including the Cowboys, Dolphins, and Jets.

In Detroit, Holmes is probably unlikely to claim a starting job for the 2016 season, but given the problems the Lions have had getting steady production from some spots on their line, including right tackle, it’s not out of the question. At the very least, Holmes should have every opportunity to compete for a spot on the team’s 53-man roster. As long as he has recovered from the foot injury that sidelined him for all of 2015, he’s a decent bet to make the cut.

Standout CFL receiver Eric Rogers is signing with the 49ers, but it was a visit to the Eagles that helped convince him to choose San Francisco. As he explains to Scott Mitchell of the Calgary Sun, Rogers was impressed at a December workout with the Eagles that head coach Chip Kelly took the time to attend and to meet with him despite Philadelphia having a game to play a couple days later. Kelly’s enthusiasm for the Calgary Stampeders star didn’t dim at all when he became the Niners’ new head coach.

“When he got hired by the Niners, he called me two or three hours after it got announced that they were going to hire him,” Rogers said. “He basically told me, ‘I guess I had to come to Cali to sign you since you’re a Cali boy.’ So he still had that kind of recruitment in him like he was at Oregon. He was like, ‘You’re the first player I called and I want you to be the first player I sign at my new job.'”

As we look forward to seeing if Rogers can earn a roster spot and make an impact for the 49ers this season, let’s check in on a few more items from out of the NFC….

After recording six sacks in his first season with the Cowboys in 2014, defensive end Jeremy Mincey failed to get to the quarterback in 2015, finishing the year without a sack. Still, Mincey was solid against the run, and thinks there’s “probably a 50-50 chance” that he’ll re-sign with Dallas as a free agent (link via Dallas Morning News).

During an appearance on KDFW-TV Channel 4 in Dallas, Mincey was also asked about Greg Hardy‘s impact on the Cowboys, and whether it would be difficult for the team to bring Hardy back and have a cohesive locker room.

“Yeah, it will be,” Mincey said. “I think it will be good for the younger guys, which I don’t know how they feel about him personally, I mean I haven’t spoken to them or asked. It would be me or him, you see what I’m saying? It would be either-or. It’s hard to have two type of line mentality guys in one room, so it’s tough to figure out who the younger guys are going to follow. Of course they’re going to look up to a guy who’s a prolific player. But I just understand the game, and I know what it takes to win.”

MONDAY, 3:21pm: In an unusual twist, the Falcons announced today (via Twitter) that Terrell Manning, whose name is listed below as one of the team’s roster casualties, is actually still on the team, since the transaction was never sent into the league office.

The club waived defensive back Jonathon Mincy today, according to a press release, but is still at 76 players since Manning remains on the roster. Presumably, the club will officially cut Manning tomorrow in order to get to a 75-man squad, but we’ll see if the Falcons have a change of heart at all.

SUNDAY, 4:46pm: The Falcons have announced a series of roster moves, trimming their roster to 76 players:

Atlanta will still need to move one more player off its roster before Tuesday’s deadline.