The Cowboys‘ offensive coordinator position is now vacant after the team parted ways with Scott Linehan several days ago, and we learned that tight ends coach Doug Nussmeier may be the favorite to replace Linehan. However, Ian Rapoport of NFL.com suggests that Dallas could look to promote quarterbacks coach Kellen Moore — whom Rapoport described as “fast-rising” and “impressive” — to the OC job (Twitter link). If that happens, RapSheet suggests that the team could add another one of its former QBs to the coaching staff by hiring Jon Kitna, most recently the offensive coordinator for the AAF’s San Diego Fleet, as the new quarterbacks coach.

As Jerry Jones mulls the coaching credentials of his former signal-callers, let’s take a look at other coaching rumors from around the league:

The two coaches fired from NFC North teams this offseason will resurface in one of the two leagues set to spawn soon.

Both John Fox and Jim Caldwell have agreed to work with the XFL as consultants, according to Michael David Smith of Pro Football Talk. The Bears and Lions axed Fox and Caldwell in January, respectively.

Fox was linked to coaching offers shortly after being fired, and it’s likely he will return to coaching at some point. But for now, he’ll work with the XFL. It’s possible Caldwell will provide input from an offensive prospective, with the defensively oriented Fox being brought in for defensive views.

The league plans to restart in 2020, after what will be a 19-year hiatus, and it’s still in the process of determining rules. However, the XFL looks to have greater financial backing this time around.

Oliver Luck is signed on as commissioner and will receive $20MM guaranteed in that role, and the league has raised more money in advance of its rebirth than what the Alliance of American Football has. However, the AAF’s brought in bigger coaching and personnel names thus far. No coaches or teams have been announced for XFL 2.0 yet.

Caldwell, 63, has been an NFL coach for 17 straight seasons and hasn’t taken a season off since breaking into the profession in the late 1970s. Fox has been affiliated with an NFL team every year since 1989. His only coaching break came in 1996, when he was a Rams consultant. Fox, 63, has experience working in other pro football leagues, having coached in the USFL during the 1985 season.

While all the NFL head coaching vacancies are either filled or will be early next week, John Fox may be poised to serve as an assistant coach for the first time since 2001. 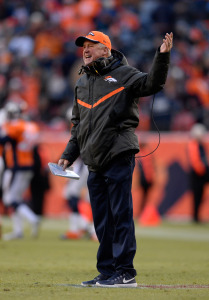 A head coach in each of the past 16 seasons, Fox is mulling offers to join a defensive staff, Jay Glazer of Fox Sports reported during an interview with WGN Radio this week. The former Panthers, Broncos and Bears HC isn’t sure if he’s ready to take a break just yet. He said in January he was willing to wait for a fit and did not sound then like he wanted to stop coaching.

Fox has drawn interest from multiple teams after the Bears fired him following a three-season run.

“He’s gotten some offers to be senior defensive assistant, things like that,” Glazer said, via NBC Sports Chicago’s Tim Stebbins. “I don’t know if he’s going to jump into the media side of it. He’s kind of mulling some offers whether or not he wants to coach. The coaching bug is not out of him yet.”

Set to turn 63 next week, Fox was the Giants’ DC from 1997-2001. Many of Fox’s defenses have fared well, with 10 of his units during his time as either a DC or HC ranking in the top 10 in total defense. A 16-year head-coaching run would make him plenty qualified to serve as an assistant this coming season.

John Fox was ousted from his job in Chicago, but he’s hoping to stay in the NFL. Fox says that he is waiting for the dust to settle on various head coaching jobs to see if he can join someone’s staff (Twitter link via Mike Klis of 9NEWS). 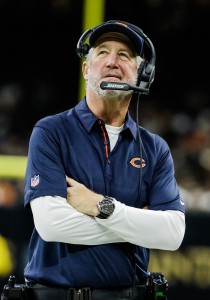 Fox was a defensive assistant for many years before he became the head coach of the Panthers in 2002. All in all, he has spent the last 16 seasons as an NFL HC, but it’s unlikely that he will get another crack at running his own show this offseason. His connections and defensive acumen could get him a DC job, however.

As shown on PFR’s Defensive Coordinator Tracker, the Ravens and Packers are the only team with active searches at this time. More spots may open up for Fox once the Cardinals, Lions, and other teams decide on a head coach.

Pace’s original deal was set to expire at the end of the 2019 campaign. With the two-year extension, Pace will likely be on the same contract length as the head coach he will bring in.

Pace joined the Bears in 2015 following a 14-year run with the Saints as a scout and director of player personnel. At 37 years old at the time of his hiring, the Texas native was the youngest general manager in the NFL.

Phillips commented on bring back Pace, saying, “He’s earned the opportunity to see his plan to fruition.”

Under Pace’s direction, the Bears traded up one spot in the 2016 NFL Draft to nab North Carolina product Mitch Trubisky. Before pulling the trigger on that deal, he made an interesting decision to sign Mike Glennon to a three-year $45 MM deal. Glennon started just four games in 2017 before he was replaced by the rookie.

During his press conference, Pace hinted that Trubisky would be involved in the head-coaching interview process. “That’s definitely something we’re going to look into,” he said. The Bears are expected to hire an offensive-minded coach but Pace says the team has not submitted any requests to interview current coaches.

Rapoport also noted (Twitter link) that the team will look at offensive-minded coaches to work with first-round pick Mitch Trubisky, while defensive coordinator Vic Fangio will also be a candidate.

Fox joined the Bears in 2015 following a productive four-year run in Denver, in which he led the Broncos to a 46-18 mark and advanced to the Super Bowl in his third season. Before joining Denver, Fox spent nine seasons as head coach in Carolina, where he led the team to its first Super Bowl appearance in just his second season on the job.

The Bears are expected to begin interviewing candidates this week and the coaching search is said to include names from the college ranks. Since the departure of Lovie Smith in 2012, the Bears have not had a winning campaign and will now be on their third coach in six seasons.

With the final week of the NFL’s regular season approaching, that only means two things; 12 teams will soon be focusing on reaching the Super Bowl, while the rest will start to look ahead to next season. One major part of looking forward is addressing who on the coaching staff will be returning in 2018. Many of these coaching questions are answered on the day following Week’s 17 conclusion, conveniently called “Black Monday”.

Veteran reporter Albert of Breer of Sports Illustrated, gave a preview of the coaches he expects to stay and the ones that will likely be shown the door in his most recent column. Breer ranked the potential firings as “Likely/Done”, “We’ll See”, and “It’s Complicated”. In total, there were 15 head coaches mentioned who could see their situations change starting next week.

Here’s a quick look at Breer’s takes on some of the league’s hottest coaching questions:

New Browns general manager John Dorsey has a plan to turn around the winless Cleveland franchise, and given the club’s lackluster history with quarterbacks, it’s perhaps unsurprising that Dorsey’s first order of business will be finding a long-term answer under center, as Pat McManamon of ESPN.com writes.

“I want to understand from a coaching perspective how they see [quarterbacks],” Dorsey said. “I want to see how the personnel staff sees it. I want to sit down with the head coach and see how he sees it. Let’s begin to build a plan moving forward and identify.”

It was a long awaited day for 49ers fans, as they got their first look at newly acquired quarterback Jimmy Garoppolo in today’s loss to the Seahawks. The former Pats backup signal caller got into the game because rookie starter C.J. Beathard was forced to exit with an injury. Garoppolo made good use of his mild playing time, throwing a nice touchdown pass as time expired.

Head coach Kyle Shanahan chose not to shed much light on how he’s thinking about the QB position moving forward. Although, he did mention that Beathard’s leg injury was not too serious, reports Eric Branch of the San Francisco Chronicle (Twitter link). While Beathard’s injury does not appear to affect his playing status moving forward, he will get additional testing tomorrow. Nevertheless, it’s notable that Shanahan wouldn’t commit to a starter for Week 13 either way, according to Matt Barrows of the Sacramento Bee (Twitter link). However, Barrows did also tweet that the 49ers coach didn’t think about pulling his rookie starter while he was healthy.

It’ll be a tough decision considering the way Garoppolo played when he entered the game and the high pick the front office gave up to get him. Shanahan hasn’t caved into public pressure as of yet, so it’s a decision that seems to remain truly up in the air.