Contract talks are underway between the Browns and Myles Garrett, sources tell Jeremy Fowler of ESPN.com (on Twitter). The Browns don’t necessarily have to rush things since Garrett still has two years left on his rookie deal. However, if they’re able to lock up Garrett this summer, they could save a couple of dollars and avoid an even larger spike in the edge rusher market next year. 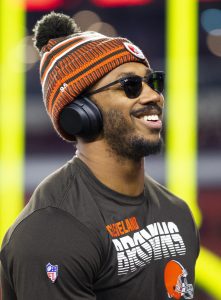 Even though it was a trying season for the Browns, the former No. 1 overall pick was phenomenal last year – ten games, ten sacks. Of course, he didn’t get a chance to top his previous watermark of 13.5 sacks from the year prior. Garrett was banned from the field for his role in the ugly brawl against the Steelers, capping his season in the fall and his career sack total at 30.5 sacks, for the time being.

Now reinstated, Garrett is in position to dominate once again. And, at the moment, Garrett’s value might be somewhat depressed by the time he’s missed throughout his career. Between the delayed start to his rookie year and last year’s suspension, Garrett has appeared in just 37 regular season games over the past three years.

Still, Garrett is poised to become the league’s new financial kingpin at defensive end. Currently, Khalil Mack leads the way with an average fo $23.5MM per year, with DeMarcus Lawrence of the Cowboys ($21MM/year) and Frank Clark of the Chiefs ($20.8MM/year) closely trailing. Meanwhile, the Browns will also have to leave enough room to take care of other stars down the road, including quarterback Baker Mayfield, cornerback Denzel Ward, and running back Nick Chubb. Fortunately, they have plenty of cap space to work with right now. And, even if they allocate some of those dollars towards Jadeveon Clowney, they can offset the expense by shedding Olivier Vernon‘s non-guaranteed salary.

The Browns will exercise their fifth-year options on defensive end Myles Garrett and tight end David Njoku, according to Mary Kay Cabot of The Plain Dealer (on Twitter). With that, both players will remain under club control through the 2021 season.

The Browns have opted to stay the course with Garrett – the former No. 1 overall pick – despite his role in last year’s brawl against the Steelers. Now reinstated, Garrett will look to build off of the progress he made pre-suspension.The Texas A&M product managed ten sacks in just ten games last season. Had he played a full season, he likely would have shattered his previous watermark of 13.5 sacks from 2018. All in all, he’s got 30.5 sacks, the highest total of any Browns player within the first three years of their career.

Njoku’s decision was actually a tricker one for the Browns since they’ve added Austin Hooper in free agency. Njoku missed the bulk of the 2019 season thanks to a wrist injury and the fifth-year option is guaranteed for injury only (next year, that will change, thanks to the new CBA). Before that, the tight end enjoyed a breakout 2018 campaign as he recorded 56 catches for 539 yards and four touchdowns. For comparison: Hooper is a two-time Pro Bowler coming off of his best season ever.

The NFL is finally done litigating the infamous fight between the Browns and Steelers on November 14th of last season. The fight’s signature moment came when Browns defensive end Myles Garrett swung Steelers quarterback Mason Rudolph‘s helmet at his bare head. The league’s discipline, which included numerous fines and suspensions for players on both teams, was headlined by an indefinite suspension of Garrett. It was reported earlier today that the league reinstated Garrett and, according to Mike Garafolo of the NFL Network, the league finally reviewed Rudolph’s appeal of his $50,000 fine and upheld their original decision.

When the news of Garrett’s reinstatement originally broke, one of Garafolo’s colleagues at the NFL Network, Ian Rapoport, noted a previous report from Garafolo that Rudolph’s appeal had yet to be decided due to a backlog at the league office. However, Garafolo quickly responded to Rapoport citing “a source” that informed him the decision to uphold Rudolph’s fine had indeed been made.

At the time of the incident, Garrett claimed Rudolph used a racial slur, which sparked his angry outburst. However, per Jay Glazer of Fox Sports, the team told Garrett to keep the allegation between him and the league before his disciplinary meeting. The allegation leaked to the media nearly a week after the incident and the league claimed they found no evidence to substantiate Garrett’s claims. Regardless, Rudolph did appear to instigate Garrett in the incident and thus, was fined $50,000.

Browns defensive end Myles Garrett has been reinstated by the NFL, as first reported by Mary Kay Cabot of Cleveland.com (on Twitter). Garrett was suspended indefinitely for his role in last year’s brawl against the Steelers, but he has the green light to return after meeting with league brass this week. 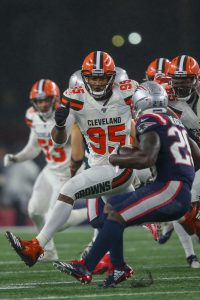 “We welcome Myles back to our organization with open arms,” said Browns GM Andrew Berry in a team press release. “We know he is grateful to be reinstated, eager to put the past behind him and continue to evolve and grow as a leader. We look forward to having his strong positive presence back as a teammate, player and person in our community.”

Garrett, the former No. 1 overall pick in the draft, made headlines for all the wrong reasons in November after he swung at Mason Rudolph‘s unprotected head with the quarterback’s own helmet. In the days that followed, Garrett’s camp alleged that the fracas was prompted by Rudolph’s use of a racial slur. The Steelers QB, through his attorney, vehemently denied those charges.

All along, it has been expected that Garrett would be permitted to play this season. Going off of the league’s recent disciplinary history, there will likely be some conditions for Garrett to satisfy even as he’s welcomed back to the field. During his ban, the NFL ordered Garrett to undergo counseling, among other things.

Before the ugliness, Garrett had a reputation as one of the league’s consummate professionals. His lack of a rap sheet, and humanitarian work, probably helped to facilitate his return. Next week, he’ll fly to Tanzania to bring clean water to locals in need.

Garrett, set to enter his fourth season as a pro, registered ten sacks in just ten games last season. Had he played a full season, he likely would have shattered his previous watermark of 13.5 sacks from the 2018 campaign. Despite the time he missed between his first-year injuries and last year’s suspension, Garrett’s 30.5 lifetime sacks are the most ever tallied by a Browns player during the first three years of their career.

Myles Garrett could be one step closer to reinstatement. On Monday, the Browns defensive end met with commissioner Roger Goodell to discuss his return from indefinite suspension, as Mary Kay Cabot of Cleveland.com tweets. 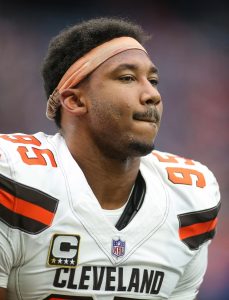 It’s expected that Garrett will be allowed to play in 2020, as Ian Rapoport of NFL.com tweets. Garrett must satisfy certain terms from the league in order to suit up again, however. The league has mandated counseling for the former No. 1 overall pick and other off-the-field steps required for re-entry.

Garrett was at the center of an ugly brawl between the Steelers and Browns in November. After striking Mason Rudolph with his own helmet, Garrett was kept out of the final six games of the season. Between the lost paychecks and a $45K fine, the incident cost Garrett $1.6MM and put his football future in jeopardy.

For his part, Garrett says that the incident was sparked by a racial slur from Rudolph. The Steelers QB and his attorney have categorically denied the accusation.

In December, the NFL permitted Garrett to return to join his club at the team practice facility, which was an indication that he would ultimately be allowed to play in the 2020 season. Still, the league has given no official word on what’s next for No. 95.

Garrett, 24, has recorded 30.5 sacks for the Browns over the past three seasons. Remarkably, he’s done that in just 37 total games – Garrett lost a combined eleven games due to injury in his rookie season and last year’s ban.

NFL commissioner Roger Goodell says he’ll meet with Browns defensive end Myles Garrett in the next 60 days (via Mary Kay Cabot of Cleveland.com). Garrett is under indefinite suspension from the NFL for his actions in an ugly November brawl with the Steelers and quarterback Mason Rudolph.

One league source told Cabot that he expects Garrett to be reinstated after meeting with Goodell, though the commish declined to speculate on how the meeting might go. Already, Garrett has been withheld from six games, costing him $1.14MM in lost pay, not including his $45K fine.

Garrett struck Rudolph with his helmet and later alleged that the QB used a racial slur against him. Rudolph and his attorney have vehemently denied the accusation.

Recently, Garrett was permitted to return to the Browns’ practice facility, which may be an indication that the league is ready to welcome him back. Meanwhile, teammates tell Cabot that Garrett has been in good spirits.

If Garrett is re-instated after meeting with Goodell, he’ll be eligible to partake in the Browns’ voluntary offseason program, which gets underway on April 6.

Both of the Browns‘ starting wide receivers may need offseason surgeries. While Odell Beckham Jr. has been battling a sports hernia injury that is not yet certain to require a corrective procedure, Jarvis Landry‘s hip problem might need to be operated on next year, Mary Kay Cabot of the Cleveland Plain Dealer notes. Landry has dealt with a hip injury all season, though the malady’s severity is uncertain. Landry has not missed a game this season, but going into his third Browns campaign, it appears likely he will miss some of the team’s offseason program. With Freddie Kitchens a possible one-and-done candidate, an offseason absence could loom larger considering a new playbook may be en route.

Here is more out of Cleveland and the latest from other North-division locales:

CBS Sports scribe Jason La Canfora published his usual Sunday slate of items from around the league, including reports on the future of Panthers HC Ron Rivera in Carolina and the Titans‘ potential desire to re-sign QB Ryan Tannehill. Let’s take a look at a few more notes from JLC: