While previous reports have indicated the Buccaneers plan to retain Gerald McCoy, the veteran defensive tackle may actually not be safe, especially given head coach Bruce Arians‘ most recent comments to Rick Stroud of the Tampa Bay Times. “He’s not as disruptive as he was four years ago,” Arians said. “But he’s still pretty disruptive. He’s still a good player….I got to evaluate him. I mean, guys at a certain age, it’s different. Usually, the age they get paid the most and production (doesn’t) match. We’ve got to find that out.” McCoy, 31, ranked fourth among defensive tackles with 21 quarterback hits in 2018 and finished as the NFL’s No. 28 interior defender, per Pro Football Focus. He’s signed through 2021, but Tampa Bay won’t incur any dead money by releasing McCoy (and would save $13MM against the cap).

Center/guard Nick Easton is set to join the Saints’ offensive line – unless he isn’t. On Wednesday, Easton’s contract was “disapproved,” according to NFL.com’s Ian Rapoport (on Twitter). Meanwhile, Chris Tomasson of the Pioneer Press (Twitter link) hears that it’s a minor issue and that everything is still on track for Easton to play for the Saints.

Reading between the lines, it sounds like the contract was turned down by the league office, but the reason behind it is unclear. Typically, if a contract is rejected by NFL execs in New York, it signals a salary cap issue or language-related snafu.

The Saints agreed to sign Easton earlier this week after losing Max Unger to retirement. The plan was for Easton to man the center position, filling a major void in the front five.

As far as we know, that’s still the plan in New Orleans, though there are other options for the Saints to explore if worst comes to worst.

The Saints are acting fast in their effort to replace Max Unger. They made the winning offer to sign Nick Easton, according to the lineman’s agent (Twitter link).

Easton will sign a four-year, $24MM deal with the Saints, Adam Caplan of Sirius XM Radio reports (on Twitter). Easton had been considering the Saints, Vikings and another team and had hoped to sign by Monday. While the NFL originally disapproved Easton’s deal with New Orleans over a minor incentive issue, the league has since officially announced the transaction. 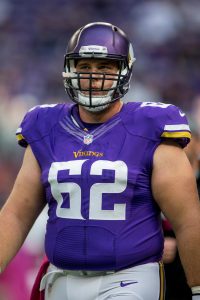 Indeed, the Saints will install Easton at center, per Adam Schefter of ESPN.com (on Twitter). Easton played both center and guard with the Vikings, his most recent season coming at guard. Easton missed all of 2018 with an injury. This $6MM-per-year pact represents a strong deal for a player who has not suited up since December 2017. A fractured ankle ended Easton’s 2017 season early, and a neck injury sidelined him throughout 2018.

This will add another veteran contract to New Orleans’ offensive line payroll. Easton Terron Armstead and Larry Warford up front for the Saints, and Andrus Peat is due to make more than $9MM this season on his fifth-year option. With 2017 first-rounder Ryan Ramczyk in place at right tackle, the Easton deal continues the franchise’s significant investment on its offensive front.

That has paid off in the recent past, however, given what Alvin Kamara and Mark Ingram have achieved. Set for his age-27 season, Easton will now be involved in blocking for Kamara and former teammate Latavius Murray. While the Saints have been high on backup Cameron Tom, per The Athletic’s Larry Holder (via Twitter), a near-future promotion does not appear to be in order. Tom will likely stay on as a reserve option next season.

The Vikings submitted an offer to keep Easton in Minnesota, and the interior lineman’s defection is a blow to a less acclaimed offensive line. A UDFA out of Harvard, Easton started five games at center for the 2016 Vikings and was a 12-game starter in ’17.

Minnesota has not made any additions up front yet, despite this area being a major problem for last season’s underwhelming team. The contracts of Mike Remmers, Tom Compton and Brett Jones expired after last season, thinning out Minnesota’s guard options considerably. Josh Kline, however, recently appeared on the Vikings’ radar.

Eli Manning collected his $5MM roster bonus Saturday afternoon, essentially ensuring he will be with the Giants for a 16th season. This confirms what has been reported throughout the offseason. Less certain: whether or not this will be the year the Giants draft a true option to be Manning’s successor. After early indications that move would be coming this year, that now appears far from a locked-in strategy. Not only are the Giants not believed to be looking to package their Nos. 6 and 17 picks to move into the top five for a quarterback, sources informed The Athletic’s Mike Lombardi the team is not enamored with any of the passing prospects in this year’s draft (subscription required). This follows an SNY report that pegged the Giants as less bullish on Dwayne Haskins, the most popular Giants mock pick at this point. Issues with Kyler Murray‘s height also may persist among Giants brass, though that may be a moot point given that Murray could be the No. 1 overall pick.

The Giants may be looking to solidify their defense, which is full of holes, instead of using a first-round selection on a quarterback. Shifting away from the Giants, here is the latest from the NFC:

The Vikings are looking to retain one of their former starting offensive guards. Chris Tomasson of the St. Paul Pioneer Press tweets that the organization made an offer to free agent Nick Easton. 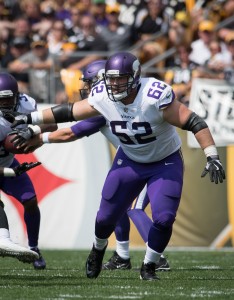 Tomasson notes that Easton met with the Saints yesterday, and there are several other teams currently in the mix for the lineman. The 26-year-old may take several additional visits before making a decision at some point over the next week.

The former undrafted free agent out of Harvard bounced between the Ravens and 49ers as a rookie before landing in Minnesota, where he’s spent the past three years. The offensive guard emerged in 2016 by starting five of his 11 appearances, and he proceeded to start all 12 of his games during the 2017 campaign. However, a fractured right ankle ended his season early, while a neck injury forced him to miss the entirety of the 2018 campaign.

Still, considering his starting experience and versatility (he’s also played some center), it isn’t surprising that several teams are eyeing Easton. Danny Isidora and Aviante Collins are currently slotted in as the Vikings’ starting guards, and Easton could realistically beat out either of the two for a starting nod.

Free agent offensive lineman Nick Easton visited with the Saints on Thursday, ESPN’s Field Yates tweets. A return to the Vikings, however, is not out of the question and the team still has interest in retaining his services, Andrew Krammer of the Star Tribune tweets.

After starting 12 games with the Vikings in 2017, Easton suffered a season-ending injury when he fractured his ankle in late December. He signed a one-year restricted free-agent deal with the team in hopes of signing a long-term deal the following offseason. However, the Harvard product missed the entire 2018 season after having surgery to repair a herniated disk in his neck in August.

Although he has seen time at center, left guard, and right guard, he was slated to be the team’s top LG in 2018. Kramer adds that Vikings general manager Rick Spielman says Easton fits the athletic type that team is looking for along the line.

Coming back from back-to-back season-ending injuries, Easton would likely serve as depth no matter where he signs.

Although Jordan Howard matched his career high with nine rushing touchdowns last season, his overall and per-carry yardage numbers continued to decline. The Bears‘ starting running back failed to eclipse 1,000 yards for the first time and averaged 3.7 per tote, as Tarik Cohen gained a bigger foothold in Matt Nagy‘s offense. Howard did not make progress as a receiving back, either, in his third year. The Bears are indeed shopping Howard at the Combine, according to CBS Sports’ Jason La Canfora. One season remains on the former fifth-round pick’s rookie contract.

Vikings guard Nick Easton done for the season after undergoing surgery to correct a herniated disc in his neck, agent Joe Linta tells Adam Schefter of ESPN.com (on Twitter). Fortunately, it is not expected to be a career-ending injury. After Schefter’s report, the Vikings confirmed that Easton will head to IR.

Easton was retained this year via a one-year, $2.9MM restricted free agent tender. He was hoping to sign a long-term extension with the Vikings, but his malady will keep that from happening this year.

Easton, a Harvard product, has appeared in 23 games with 17 starts. Although he has seen time at center, left guard, and right guard, he was slated to be the team’s top LG in 2018. Easton didn’t fare all that well according to the advanced metrics, but the Vikings had enough confidence to put him in that starting role.

Without Easton, the Vikings may turn to Tom Compton, Danny Isidora, or sixth-round pick Colby Gossett to fill the void.

When talking to the media at OTAs, Vikings guard Nick Easton made it clear he’d like to stay in Minnesota longterm and would like an extension sooner rather than later. He told The St. Paul Pioneer Press’ Chris Tomasson that he’d “love to be here long-term” and answered “I hope so” when asked about the possibility of the Vikings giving him an extension soon (Twitter link).

Easton is playing under a one-year $2.9MM restricted free agent tender after he was tendered at the second-round level by the Vikings. Easton signed the tender back in April and will be a free agent after the season.

While Easton has now made his preference publicly known, he may have to wait a while. After giving Kirk Cousins a historic fully guaranteed contract, the Vikings currently don’t have a ton of cap space with which to sign their impending free agents, and will have to allocate their limited resources wisely. They have a slew of young players all set to be free agents at the end of the year. Young defensive studs Anthony Barr, Danielle Hunter, and Eric Kendricks are all heading into the final year of their contracts, as is star wide receiver Stefon Diggs.

The Vikings may decide to let Easton walk in favor of signing some of their other young guys. What they decide to do will likely depend on how they feel about the rest of their interior linemen. Easton is locked in as the starting left guard, and the other guards on the roster are underwhelming and not realistic options to replace him. If the Vikings don’t add more guard help between now and next offseason, there’s a good chance Easton will get the extension he’s looking for.

Minnesota and Easton have mutual interest in hammering out a long-term agreement, tweets Chris Tomasson of the St. Paul Pionner Press. Easton won’t hit unrestricted free agency until next spring, so the Vikings have plenty of time to work out an extension.

The Vikings have invested heavily in their offensive line over the past year, as they inked free agent tackles Riley Reiff and Mike Remmers while deploying a third-round pick on Pat Elflein, who became the club’s starting center in his rookie season. Easton, a former undrafted free agent, spent most of his 2017 time at left guard, and played 92% of Minnesota’s offensive snaps overall. Pro Football Focus ranked the 25-year-old as the No. 58 guard among 77 qualifiers a year ago.

Easton was one of 14 NFL restricted free agents to be tendered at the second-round level. There was no rush for Easton to ink his tender, as RFAs have until April 20 to work out offer sheets with other clubs. However, it was unlikely that any NFL team would have been willing to sacrifice a second-round pick in order to land Easton.