Broncos running backs coach Curtis Modkins will not travel with the team to New England for the rescheduled Broncos-Patriots game due to a positive COVID-19 test, the team announced Saturday. Modkins, 49, is in his third season as Denver’s running backs coach. He is not experiencing symptoms from the virus, according to the team, which has performed the customary contact tracing after this positive test. The former Bills and 49ers offensive coordinator is a holdover from the Vance Joseph regime and has been retained despite the Broncos changing OCs the past two offseasons. Modkins has been an NFL assistant since the 2008 season. Modkins’ son, Jett, is a Broncos intern and lives with his father. Jett Modkins will not make the trip either, Troy Renck of Denver7 notes. The Broncos will also be without Melvin Gordon from their backfield mix Sunday.

It’s been a bad year for injuries, and unfortunately we’ve already heard reports of significant ones to guys like O.J. Howard and Austin Ekeler this Sunday. Here’s the latest batch of updates as Week 4 winds down:

The Broncos have agreed to terms with first-round pick Noah Fant, according to Mike Klis of 9News (on Twitter). The deal will pay the tight end $12.6MM and includes a fifth-year team option for the 2023 season. 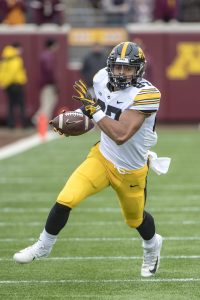 Fant set collegiate career highs in catches (39) and receiving yards (519) last year to go along with seven touchdown receptions. Before that, he put himself on the national map in 2017 with a team-leading eleven TD catches.

With the NFL draft less than two weeks away, the Jets are ramping up their draft efforts. NFL.com’s Ian Rapoport tweets that the team is hosting Kentucky pass-rusher Josh Allen today. The team also had Iowa tight end Noah Fant in for a visit yesterday. 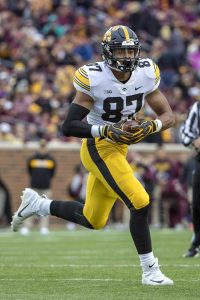 The interest in Allen isn’t much of a surprise, as the Jets were listed among the five teams that the linebacker would be visiting (along with the 49ers, Raiders, Giants and Lions). There were even some whispers during the defender’s pro day that he would ultimately be selected third-overall by the Jets. Allen clearly benefited from staying in school for his season year, registering 17 sacks this past season. He also finished the 2018 campaign with 56 tackles, five forced fumbles, and 21.5 tackles for loss.

Assuming Kyler Murray and Nick Bosa are off the board by the Jets’ third-overall pick, you could make an argument that Allen would be the best player available. The edge defender has generally been ranked alongside Alabama defensive tackle Quinnen Williams in mock drafts and prospect rankings.

The interest in Fant is a bit surprising. While the tight end is generally considered to be one of the best prospects at his position (along with teammate T.J. Hockenson), there’s little chance the organization selects him with the third pick. Plus, while Fant’s draft stock is varied, it’s expected that if he’s not selected in the first round, he’d be an early-second-rounder. The Jets sent their second-rounder to the Colts in last year’s blockbuster, although they are armed with a pair of third-rounders. In other words, the Jets could easily make a trade to move up in the draft.

Fant was a touchdown machine at Iowa, hauling in 18 touchdowns between the 2017 and 2018 season. In New York, he’d provide Sam Darnold with another red zone target, and he’d team up with All-Rookie member Chris Herndon to form a formidable tight end duo.

Noah Fant will forgo his final year at Iowa in order to enter the 2019 NFL Draft. Fant is widely viewed as one of the top tight ends in this year’s class and may even be a Top 10 selection.

“Since the very first time I put on a pair of football pads as a child, it has been by dream to play in the NFL,” Fant wrote. “I am very excited for what the future holds and extremely humbled by the amazing opportunity in front of me.”

Fant, understandably, will not risk injury by playing in Iowa’s bowl game this year. His final season on campus ends with a First Team All-Big Ten Conference selection, 518 receiving yards, and a team-high seven touchdowns. All in all, he leaves Iowa with 78 career catches for 1,083 yards and 19 TDs.

At 6’5″, Fant has ideal size for the tight end position and will likely be the first TE to come off of the board. That’s a strong endorsement of his skills considering that this year’s crop at the position is considered to be rather solid. It’s certainly a better group than the 2018 lot as Hayden Hurst was the only tight end selected in the first round.