3:57pm: Bolden’s exit from the Bears’ roster might only be temporary, according to Eli Kaberon of the team’s official site (Twitter link). Chicago released Bolden to make room for Charles Tillman, who will sign a one-day contract to retire as a Bear. Once that goes through, Bolden could rejoin the club in time for training camp, per Kaberon.

3:26pm: The Bears announced that they have released safety Omar Bolden. Bolden signed a one-year, $840K deal ($80K guaranteed) with Chicago in March. 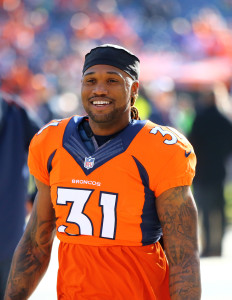 When he signed this spring, Bolden became the latest in a series of former Broncos who played under John Fox in Denver to join the head coach in Chicago. The Bears also added the likes of linebacker Danny Trevathan, offensive lineman Manuel Ramirez, and long snapper Aaron Brewer, but the reunion didn’t last long for Bolden.

A fourth-round pick out of Arizona State in 2012, Bolden never really played a major role on defense during his four years in Denver. However, he has been something of a jack-of-all-trades in Denver, contributing in the return game and in punt and kick coverage. Now, the Bears seem to be going in a different direction on special teams.

Bolden recorded his first career touchdown in 2015, returning a punt 83 yards for a score. In the postseason, the 27-year-old’s lone punt return, against the Steelers in the divisional round, went for 42 yards.

The Bears and head coach John Fox have added yet another former Bronco to their roster, according to Troy Renck of the Denver Post, who reports (via Twitter) that Chicago is signing defensive back and special-teamer Omar Bolden to a one-year, minimum salary contract.

Bolden is the latest in a series of former Broncos who played under Fox in Denver to join the head coach in Chicago. So far this offseason, the Bears have also signed linebacker Danny Trevathan, offensive lineman Manuel Ramirez, and long snapper Aaron Brewer.

A fourth-round pick out of Arizona State in 2012, Bolden never really played a major role on defense during his four years in Denver. However, he has been something of a jack-of-all-trades in Denver, contributing in the return game and in punt and kick coverage.

Bolden recorded his first career touchdown in 2015, returning a punt 83 yards for a score. In the postseason, the 27-year-old’s lone punt return, against the Steelers in the divisional round, went for 42 yards.

The free agent contracts for players like Brock Osweiler, Olivier Vernon, and Malik Jackson dominated NFL discussions when the new league year opened earlier this month, but Field Yates of ESPN.com wants to make sure that some of this year’s less heralded deals don’t fly entirely under the radar.

In an Insider-only piece, Yates identifies the Panthers‘ one-year deal with defensive end Charles Johnson, the Seahawks‘ three-year agreement with wide receiver Jermaine Kearse, and three other signings as moves that perhaps didn’t get the attention they deserved.

As expected, the Broncos officially placed defensive back and return man Omar Bolden on their injured reserve list today, ending his 2015 season, per a team release. To replace Bolden on the 53-man roster, Denver has promoted cornerback Taurean Nixon from the club’s practice squad.

Bolden, 27, was limited to just nine games during the 2015 season, and wasn’t a contributor on defense for the Broncos. However, he was the team’s most effective return man when given the opportunity, with one of his five regular-season punt returns going for an 83-yard touchdown, and his lone playoff return going for 42 yards. A partial PCL tear suffered in the divisional round on Sunday ended Bolden’s season prematurely.

Nixon, a seventh-round pick in 2015, spent the entire season on the Broncos’ practice squad. If he’s active this Sunday, he’ll likely be used on special teams and perhaps in the return game, rather than on defense.

The Broncos now have an opening on their practice squad that they can fill prior to Sunday’s game if they so choose.

Our newest round of injury updates has an impact on two teams still alive in the postseason, along with one notable player eligible for free agency this winter. Let’s dive in and check out the latest….

This point in the offseason can be slow with big news that actually has on-the-field consequences. This past week only saw a few notable signings and one major training camp injury. However, a few camp notes include some players who are looking to step into new positions this coming NFL season:

While the focus is on Von Miller and Chris Harris rehabbing ACL injuries, denverbroncos.com’s Andrew Mason takes a look at other defenders coming off injury who could strengthen the Broncos’ defense, including free safety Quinton Carter and pass rusher Quanterus Smith.

Carter, who has missed most of the last two seasons because of knee and hamstring problems, looked promising as a rookie in 2011, but has since been passed on the depth chart by Rahim Moore. With Moore and T.J. Ward holding down starting spots and Duke Ihenacho and special teams captain David Bruton providing depth, Omar Bolden could be on the bubble. A healthy Carter could create an interesting storyline if he’s able to push Moore, as both are free agents at year’s end.

In the case of Smith, he was one of the most productive pass rushers in college football in 2012 before a late-season torn ACL knocked him down to the fifth round. After a “redshirt” 2013, the 6-5, 255-pounder is poised to earn reps in passing situations. Said defensive coordinator Jack Del Rio: “On tape coming out, we liked [Smith’s] athleticism, his length, his ability to bend and his ability to rush the quarterback. So those are things we’re looking forward to seeing from him.”