Tavon Austin‘s debut with the Jaguars could be imminent. The veteran wideout was designated for return from IR today, the team announced.

This move will start a three-week clock. Austin can be activated to the active roster at any point over the next 21 days. If he isn’t activated within that time, Austin will be ineligible to play this year (although this would most likely be avoided by his release).

Austin joined the Jaguars in early August, and the team showed that they intended to keep him around when he survived final cuts. The team subsequently put him on short-term IR due to a quad injury, leading to today’s move.

The veteran hasn’t come close to matching the production from his days with the Rams. Over the past four years, Austin has seen time in 41 games (nine starts), collecting 756 yards from scrimmage and five touchdowns on 110 touches. This included a 2020 campaign when he had only five catches for 20 yards in four games with the Packers.

Jacksonville has a talented grouping of receivers in DJ Chark. Marvin Jones, and Laviska Shenault, but Austin would provide another savvy target for Trevor Lawrence. The Jaguars already prepared for Austin’s return when they moved on from practice squad receiver Phillip Dorsett today.

The Jaguars have placed wide receiver Tavon Austin on injured reserve, per a club announcement. The team did not disclose Austin’s injury, but the issue will keep him sidelined for an extended period.

It’s a frustrating setback for Austin, who lost time to injury last year with the Niners. He healed up later in the season to join the Packers, but didn’t see a ton of snaps in Green Bay. All in all, he finished with five catches for 20 yards across four games as a Packer.

Austin, the eighth overall pick of the 2013 draft, has been used more as a gadget player and returner than a true receiver in recent years. He was expected to return punts for the Jaguars and see some time in the new-look offense, but those plans have been scuttled for now.

“He played really well Sunday,” head coach Urban Meyer told reporters on Tuesday . “We think with Joe and with Tosh, he’s a guy that it’s time to play. He’s been around and I can see the urgency in his look, in his practice and in the way he played.”

With Austin out of the picture, the Jaguars are left with five receivers in DJ Chark, Marvin Jones, Laviska Shenault, Jamal Agnew, and Tyron Johnson.

The Jaguars have agreed to sign wide receiver/kick returner Tavon Austin (Twitter link via NFL.com’s Mike Garafolo). Terms of the deal are not yet known, but it’s likely a low-cost, one-year deal.

Austin signed with the 49ers in August of 2020, but was placed on injured reserve before the season started. After his release, he hooked on with the Packers. At the time of signing, the Packers didn’t seem to have much depth at WR beyond Davante Adams, but Austin didn’t see a ton of action on offense. All in all, he finished with five catches for 20 yards across four games.

Austin, the eighth overall pick of the 2013 draft, has been used more as a gadget player and returner than a true receiver in recent years. He may still offer big play ability, although at 31 he’s not quite as explosive as he used to be. Austin may get a chance to return punts for the Jaguars, but he’ll have to solidify his roster spot over the next few weeks.

The Jets have already given significant money to Corey Davis and Keelan Cole this offseason, but they might not be done adding receivers. New York worked out veteran Tavon Austin on Wednesday, a source told Ian Rapoport of NFL Network (Twitter link).

It seems a contract is a real possibility, since Rapoport writes that it “sounded like it went well.” Austin has appeared on the verge of falling out of the league a couple of times, but has been able to find additional chances. He signed with the 49ers right before the start of last season, but was placed on IR prior to final cuts and then later released. He managed to latch on with the Packers in December and played in four games for Green Bay, catching five passes.

Notably, Aaron Rodgers highlighted Austin late in the season as someone who made a very positive impact on the locker room. Perhaps that’s what the Jets are looking for here. Austin was a big name player coming out of college after a decorated career at West Virginia, and the Rams drafted him eighth overall in 2013.

He made a number of splash plays, and had a punt return touchdown in each of his first three pro seasons, but never lived up to his draft status. His career-high in receiving yards was 509 back in 2016. The Rams traded him to the Cowboys in April of 2018, and he spent the next two seasons in Dallas.

He was mostly used as a gadget player by the Cowboys, with only 21 receptions and 12 rush attempts in 21 games with the team. He turned 31 in March.

Tavon Austin is back in the league. The Packers will be signing the veteran wide receiver, a source told Mike Garafolo of NFL Network (Twitter link).

Austin signed with the 49ers back in August, but was placed on injured reserve before the season started. He was released from IR last month, and has been a free agent ever since. Green Bay isn’t super deep at wideout beyond Davante Adams, so this is a flyer that can’t really hurt. That being said, Austin has been used more as a gadget player and returner than a true receiver in recent years.

The eighth overall pick of the 2013 draft, Austin spent his first five seasons with the Rams. Current Packers coach Matt LaFleur was his offensive coordinator with the Rams for the 2017 season, so there’s some familiarity here. He never came close to living up to his draft status, but Austin had some electric moments with the Rams due to his speed.

He’s got big play ability, although at 30 now he’s probably not quite as explosive as he used to be. Austin spent the past two seasons with Dallas, and caught 13 passes for 177 yards and a touchdown last year. He also returned punts for the Cowboys and Rams, and it’s possible he’ll reprise that role in Green Bay. We don’t know the terms yet, although it’s fairly safe to assume he didn’t get any significant money.

Packers To Meet With Tavon Austin

The Packers will work out Tavon Austin, as Field Yates of ESPN.com tweets. The former Rams and Cowboys wide receiver has yet to see live action this year.

Austin, the No. 9 overall pick in the 2013 draft, joined the 49ers over the summer and was said to be playing well in training camp. Then, when a knee injury forced him to IR, he was cut loose. Austin has never come close to justifying his draft status, but his speed and versatility continues to intrigue coaches around the league. In theory, Austin could feature as a receiver, rusher, and returner for the Packers.

Of course, health has been Austin’s biggest stumbling block as a pro. Over seven injury-laden years in the NFL, Austin has notched 215 receptions while averaging just 9.3 yards per catch. For what it’s worth, he did average more than 15 yards per grab over the last two seasons with the Cowboys, but that was in a super small sample size of 21 receptions.

The Austin audition comes after Darrius Shepherd fumbled on a kickoff return against the Colts. With over 200 career kick and punt returns on his resume, a special teams role could be Austin’s quickest path to getting back on the field. 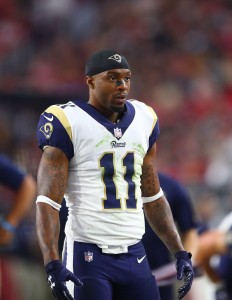